What Are The Best Alternatives Of Angular? 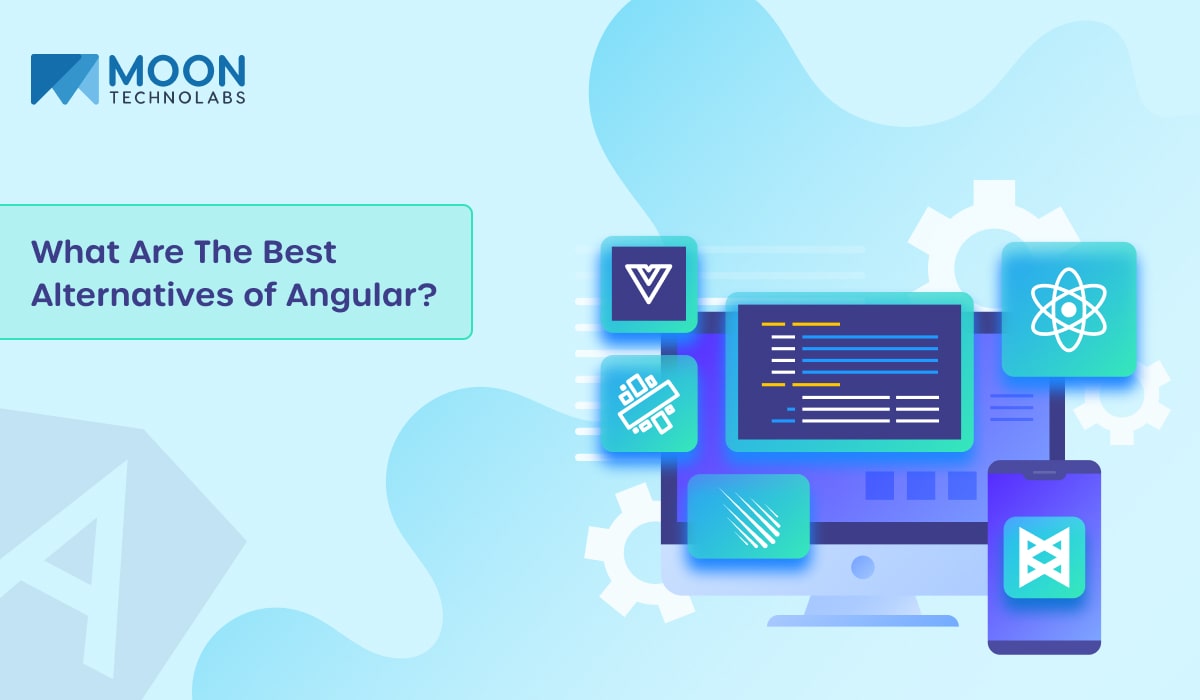 A ngularJS  is a single-platform framework that a developer can use to build applications for the web, apart from desktop and mobile devices. However, at times, a specific business project may have unique requirements that AngularJS may not be able to fulfill. During times like these, you’ll need an appropriate substitute. This topic will point out a few choices.

AngularJS happens to be one of the most popularly used frameworks of all time. It powers almost 300,000 websites at the moment. In reality, some of these sites are household names folks can’t live without. For instance, AngularJS is at the base of Google, PayPal, and YouTube.

Despite being an all-powerful platform, AngularJS isn’t always the best choice. After all, every project has unique requirements that this framework may fail to fulfill. Indeed, it has a lot of benefits to offer, but your specific project may need the best Angular alternatives this topic will point out.

If you wish to find out what they are, just continue reading.

Before getting into the details, it’s best to start with an explanation of AngularJS and everything that makes it popular. It’s an open-source web framework for frontend development designed by Google about twelve years ago.

To be precise, it came out in October 2010. Since then, corporations and developers have been maintaining it. They address all challenges associated with building single-page applications.

With so many bright minds contributing to making AngularJS better, it isn’t surprising that this framework is now famous among frontend developers. Even business companies choose AngularJS over its counterparts.

Based on the Stack Overflow Developer Survey of 2018, AngularJS is the second-most recognized framework for frontend development. That’s why business owners are always in search of AngularJS developers to oversee the development of their business websites.

The purpose of the framework is to simplify the processes of development and inspection of various applications. Consequently, it can provide a framework for the model-view-controller or MVC for the client-side. It even has the ability to offer model-view-ViewModel or MVVM architectures.

Even with all these powerful features, AngularJS has a few downsides you should know about. The only way to counteract these disadvantages is to leverage Angular alternatives.

The problems of AngularJS

You’ll find hundreds of articles and blogs on the internet singing praises in the name of AngularJS. However, it’s the list of disadvantages that tends to make an effective technology like this one inappropriate for specific projects.

As already mentioned several times in this write-up, AngularJS is, hands down, one of the best frameworks currently available. However, a beginner will never agree with this statement. Even if a developer has experience in working with CSS, JS, and HTML, they’ll feel uncomfortable with the steep learning curve of AngularJS.

The opinionated nature of AngularJS gives it a set of unique rules that a developer has to learn and follow. While it’s good and bad at the same time, the learning curve creates problems for beginners.

AngularJS is evolving constantly. What started as a JavaScript framework is now an individual system. Today, developers use Angular 13. As you can guess, the never-ending release cycle tends to confuse beginners.

They often struggle to contemplate the versioning. Students start with a specific version, but by the time they complete their first project, another version pops up. It contributes to trust issues. Developers think they must keep working on their projects and fix all versioning conflicts and compatibility problems.

Too much boilerplate code

If you want to create a simple application, it’ll need a lot of boilerplate code. However, tools like StackBlitz make it easier for people to try various code ideas and experiment with them. Developers won’t even have to install anything on their computers.

However, if the developer has to use AngularJS to build something, they’ll have to install different programs, even if it’s a “Hello World” application.

Without further ado, this topic will finally take you to the real thing – The Angular alternatives you can use in 2022.

Most people are familiar with ReactJS and for all the right reasons. It’s a recognized JavaScript library that came out in 2013. Currently maintained by Facebook, the creators of ReactJS designed it to build UIs of applications. Today, however, it plays a crucial role in the entire ecosystem of frontend frameworks.

In short, it’s one of the most reliable Angular alternatives you can pick. Your developers will be able to use it to create user-friendly, functional, and attractive websites much faster.

Also Read : These Are The Top 7 Alternatives To React Native

Aurelia is fundamentally a collection of modern modules of JavaScript. When developers use these modules together, they achieve a powerful and functional app development platform. It’s one of the best Angular alternatives that your app development team can use to build solutions for mobile and desktop devices, other than web browsers.

One exclusive characteristic of Aurelia is that its architecture isn’t monolithic. It contains a collection of oriented modules that aid the process of creating web applications.

Vue.js is one of the most utilized libraries of JavaScript. It’s also one of the best Angular alternatives. Created nine years ago, Vue.js isn’t a framework per se. However, it has innumerable users because of its profound efficiency in creating SPAs and UIs. Vue.js focuses primarily on the view layer.

Business owners may not be familiar with the name of Backbone.js, but developers using JavaScript for some time know of it. It’s a lightweight library of JS that eases the process of SPA creation. It depends on the MVC design pattern, which lets it facilitate communication between clients and servers. It does so through a RESTful JSON API.

The name of this full-stack framework based on JavaScript has a ring to it. However, the name isn’t the only thing attractive about it. Meteor is one of the best Angular alternatives containing several libraries suitable for building apps and websites.

Well, there you have it – an all-inclusive list of the best replacements for AngularJS you can use. They’re incredible for any kind of app you want to build in 2022. Of course, most developers and development agencies favor AngularJS, but there’s one organization that doesn’t hesitate to use these alternatives. It’s called Moon Technolabs – a reputed software and app development firm.

If you have plans to build a digital solution that AngularJS won’t be able to support, you need the services of an agency like the one mentioned above. Such agencies excel in using every substitute of this framework available under the sun.

What do you need to know about AngularJS?
AngularJS is one of the most popular open-source web frameworks created by Google in October 2010 for frontend development.
Why should you use the alternatives of AngularJS?
Every project has unique requirements. Even if AngularJS is one of the best frameworks of all time, it isn’t suitable for every project. What you’re trying to create may benefit from an appropriate substitute for AngularJS.
What are the best replacements for AngularJS?
Some of the most widely used alternatives for AngularJS include ReactJS, Vue.js, Aurelia, Backbone.js, and Meteor.

« The Best Alternatives To The Ionic Framework