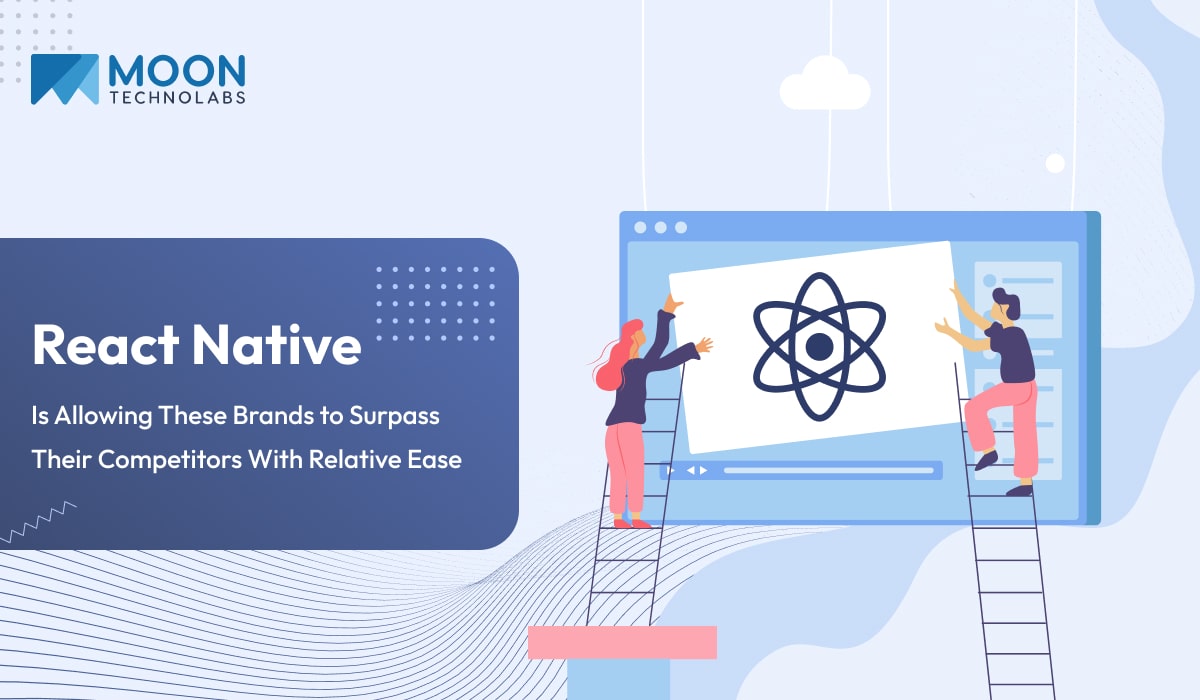 React Native is a framework that deserves your attention for all the right reasons. This write-up will tell you a bit about it and inform you about world-renowned brands that earned the fame they enjoy today with the help of React Native.

When it comes to building the best mobile applications, most developers will suggest building native solutions.

However, about seven years ago, the creators of Facebook saw something others missed. They thought about creating a framework based on React.js specifically for mobile app development. Sooner rather than later, the business owners received the boon of React Native. It allows app developers to design hybrid apps for mobile devices.

In this write-up, you’ll learn about highly recognized businesses that chose a React Native app development company to work on their projects. You’ll also find out why they thought it would fit their brand better than anything else.

It’s best to start with the fundamentals. So, what is React Native anyway?

It’s an open-source framework designed specifically for cross-platform app development. Fabricated by Facebook and launched in March 2015, app developers can use it to create digital solutions for Android, iOS, and Microsoft UWP.

Numerous businesses take too long to decide whether they should build cross-platform apps or stick to the native variants.

The only thing special about native apps is that they have better UIs and UX. Native applications work only on the platform a developer designs them for. Understandably, there’s a disadvantage. If you want your app to be present on various app stores, and if you opt for a native app, you’ll have to stick to one platform only.

Building applications separately for Android, iOS, and also Windows is going to take too much time and effort. You’ll need separate developers and exclusive tech stacks for each platform. Now, Facebook is a brand that has always wanted to deliver incredible mobile experiences. It also wants app developers to go down the same road. That’s why it introduced React Native.

Just two years ago, a survey conducted by Stack Overflow found that React Native was in the sixth position among the most popular frameworks preferred by app developers. React Native achieved fame because it allowed businesses to design applications for multiple platforms without spending as much time and money as they did when they created native solutions.

Here are some of the brands that resorted to the services offered by a React Native app development company for their projects.

Being the creators of the framework, you probably expected this. Facebook is a hardcore user of React Native. The app of Facebook that you have on your smartphone runs on it. In reality, it would’ve been suspicious if Facebook didn’t use its own framework.

The platform called Facebook Ads Manager is a convenient place for businesses and individuals alike. They can manage advertisements for their products and services using it, and React Native is at the base of it.

Despite being cross-platform in nature, it handles the differences in the UI in terms of advertisements and date formats incredibly. The UI transitions and animations meet the same standards.

As Bloomberg is a finance-based company, not everyone is familiar with its name. Still, those who are aware of it will always praise it. It mainly provides tools for analytics and equity trading, apart from a few other enterprise applications.

It also owns another website with the same name that informs the public about business and market trends. If you wish to build a digital platform like this one, a React development company can help because the app of Bloomberg leverages React Native to complete its tasks.

By using this framework, Bloomberg managed to implement the system of automated code refreshing. In short, users will receive the latest updates whenever they open the application.

Travels use Airbnb as a pocket-friendly alternative when they get irked by the exorbitant prices charged by hotels. Homeowners offer their properties to travelers for a few days, sometimes longer, via Airbnb. In turn, the brand lets its users enjoy their vacation with a relatively smaller price tag.

A large group of developers created the mobile app of Airbnb using React Native. The most prized feature of the framework is that it lets developers build apps with reusable code.

Everyone knows that the business of Uber came into existence to transport customers from point A to point B without paying a price that’d burn a hole in their pockets. Almost every yellow cab operating in every corner of the world charges unnecessarily high prices.

Then, Uber extended its business line by introducing UberEats – a food delivery service, just like DoorDash or Seamless. While it may be just a small part, the app of UberEats is thankful to React Native. After all, its creators relied on this framework to fabricate some of the sections of its dashboard.

A React development company gave UberEats the development tools it needed to create an elegant UI, complemented by an equally smooth UX. Push notifications and sound are also useful additions to the dashboard of this application.

Instagram is yet another social media platform. Since 2012, Facebook owns it. Unlike the latter, however, Instagram primarily displays digital photos and a few short videos now and then.

In 2016, the operators of Instagram started thinking about shifting to React Native. Integrating this framework with the existing technology of Instagram was a challenge, but they solved it. Today, they can push features much faster and maintain both Android and iOS versions of the app easily.

Discord is a highly-cherished use case of Voice over Internet Protocol or VoIP. VoIP isn’t anything more than digital communication taking place via the web.

Discord allows friends and even communities to communicate with each other via voice, video, and text to converse over the web. It’s available for free, but it’s a tool mostly used by gamers. Due to React Native, the Android and iOS versions of the Discord app share 98% of the code.

Pinterest is akin to social networking platforms, but it doesn’t facilitate communications. Instead, it lets folks post and pin their ideas on different topics, such as food recipes, interior design, and others.

Just like many other businesses that hire mobile app developers specializing in React Native, Pinterest wanted to choose a framework based on its capacity. They hoped to use something that’ll let them share code from one platform to the other.

In doing so, Pinterest invested in developer productivity constructively.

Skype is yet another VoIP program that facilitates video chatting. It’s the main communication channel offered by this program.

Users can also receive and send voice calls and instant messages through it. You’re probably aware of the fact that it’s a product from the esteemed house of Microsoft.

Recently, the business giant started using Electron after using React Native for a few years for the mobile app of Skype. However, Microsoft didn’t do it due to performance-related setbacks.

Unfortunately, this idea of Microsoft backfired. Most users didn’t like the change as it forced the brand to remove many of the useful features, such as answering messages via the notification bar or syncing with Microsoft Outlook.

When the company started using React Native initially in 2017, users received several upgrades they fell in love with almost instantly. These included the icons and a full-fledged overhaul of the layout. It even improves the consistency between the iOS and Android versions of the application.

Walmart is a superstore. It can offer just about everything one may need, and it operates in almost every corner of the world. Walmart sells grocery items, clothes, electronics, and whatnot.

Representatives of the brand mentioned that they managed to share almost 95% of their digital solution’s codebase between iOS and Android only because of React Native.

They even appreciated the fact that they needed only one team of developers specializing in JavaScript to finish the project. It eliminated every chance of confusion.

Salesforce is a CRM or customer relationship management system built for sales teams. Today, hundreds of business companies use it for sales, marketing, taking care of customers, and e-commerce purposes.

There’s a Salesforce app development platform designed for programming Artificial Intelligence to handle customer services called Einstein. The framework that made it possible is React Native.

In today’s day and age, hiring mobile app developers to build digital solutions is the way to go for nearly every business. If you hope to achieve long-term growth, you need to do the same. Then again, you must also face the age-old question and find an appropriate answer to it – is native app development better than cross-platform or vice versa?

React Native and app development firms like Moon Technolabs give you a chance to build applications for different platforms without working on each separately. Even a decade ago, it was impossible. It’s safe to say that React Native can be your ladder of success if you’re willing to climb it. So, are you?

10 Businesses That Used Vue.js To Get To The Top »