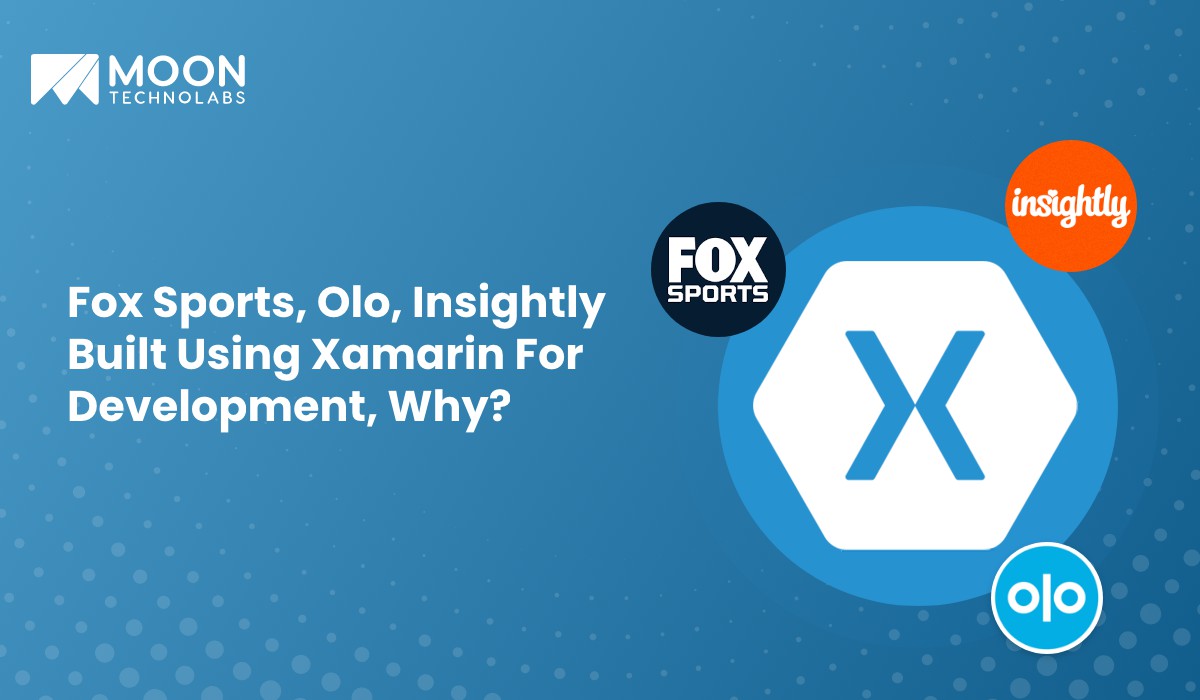 Do you know why companies like Insightly, Fox Sports, and Olo used Xamarin for their applications? It’s precisely what this topic will tell you. So, keep reading.

What makes a mobile application successful in today’s competitive landscape? You need an excellent idea, an incredible piece of technology to convert the idea into reality, an exceptional of both UI and UX, on-time bug fixing & updates, and marketing. Do you think these are enough? They are, at least as far as the basics of mobile app development go.

However, you shouldn’t expect to go far armed with only the basics. The funnel is extremely deep. Just because you see the tip of the iceberg doesn’t mean you can contemplate the depth of the whole thing. Mobile app development is a procedure that incorporates multiple technical processes. If you can bring everything together, you’ll come up with an appropriate solution. The most crucial factor, though, is the technology used.

Today, multiple popular technologies are available, including Ionic, React Native, Xamarin, and more for the development of applications. Developers favour these technologies because of the code reusability feature that allows them to use the same code for both iOS and Android. Code reusability further reduces the overall duration, cost, and time-to-market of the project.

Now, all the platforms mentioned above have their fair share of advantages and disadvantages. You need to select one based on the project you’ll be working on. Due to the perks of Xamarin, it secured its place in the minds and hearts of app developers. Whenever they have to build cross-platform apps, they resort to Xamarin. Apart from its features, Xamarin can reduce the expenses of app development. This write-up will tell you why you should opt for the services of a xamarin app development company.

So, how does Xamarin dial down the expenses of development?

It’s undoubtedly a benefit that you’ll like – Xamarin has the power to reduce app development costs. It does so by providing tried-and-tested solutions to some of the most recognized organizations and brands. The framework first made its appearance in 2011. Then, in 2016, Microsoft acquired it. Owing to its widespread presence, it’s much easier to use compared to other recognized cross-platform app development technologies. Brands like Fox Sports, Olo, Insightly, Coca Cola, Pinterest, and The World Bank already launched recognized apps built using cross-platform technology.

As already mentioned earlier, code reusability is a recognized feature of Xamarin. By providing this feature, Xamarin reduces the expenses you’ll incur when you hire a xamarin app development company. This platform lets developers use more than 75% of the logic of the app, as well as UI for building Android and iOS versions while cutting down the cost and time of development. It’s possible due to the all-inclusive native API coverage of Xamarin. By using it, developers can build two different applications within the same timeframe.

Apart from everything mentioned above, Xamarin can simplify one of the most important tasks of building and releasing an application – app maintenance. You need to keep adding or altering the features you include in your Android and iOS application. As the developers working on the project will use only one codebase, it will reduce your expenses. By using Xamarin.Forms, the providers of xamarin mobile app development services can streamline the maintenance and development processes at the same time while making them focus only on the procedure strategically.

As various apps require different teams for maintaining and improving the performance of the app, which, in turn, will reduce the speed of the development process because one development team will create both solutions. Apart from that, the single codebase reduces the complexities of native app development. Developers will have to work with only one codebase, methodology, language, and toolkit. It goes without saying that if the development process is fast enough, it will take less time to market the application. Using Xamarin will never compromise the quality of the application.

The power of Xamarin is such that it allows the providers of xamarin mobile app development services to share visual elements. During the initial period of the launch, developers can only leverage a specific portion of the codebase for building iOS and Android applications. However, they need to work on the visual aspects separately. The improvements introduced in Xamarin.Forms allow developers to share visual elements too by using a UI toolkit making a recognizable interface.

Finally, it’s the efficiency of the framework that makes Xamarin so popular. It doesn’t require customized components, which further reduces the time required to build an application. The latest version of Xamarin focuses on the development of unique components that will aid developers. It will prevent them from spending more time on building and customizing the elements. Furthermore, the code-sharing ability of Xamarin will allow more teams and folks to indulge in the same to find out what will happen. Finally, when more people dedicate themselves to finding the solution for a specific issue, the outcome will always be the best.

Here are a few recognized apps for which some of the most recognized and reputable business brands didn’t hesitate to hire dedicated xamarin developers.

Olo is an online food ordering application that leverages the power of Xamarin. It’s a custom-brand platform that has over 150 restaurants as its partners. The application makes the experience of ordering food online seamless and effortless. Currently, it caters to over 30 million users.

Storyo is yet another popular app developed using Xamarin. Basically, it lets users create videos using still photographs. Once created, the app will present the images with photo metadata, such as the time, place, and other contextual pieces of information. This app is available on several platforms, and folks from 170 countries are using it.

Insightly won the hearts and minds of hundreds of business owners. Just like the other apps mentioned above, this one leverages the power of Xamarin for startups. At the moment, it holds a record of over 200,000 downloads. From the first day, this app has been helping business owners close sales, earn profits, and keep every crucial piece of business data safe. Insightly used Xamarin to deliver native-like performance while sharing 65% of the code on both Android and iOS platforms.

The app developed by The World Bank serves to conduct surveys. There was a time when this banking firm used to conduct surveys using traditional paper-based methods that were time-consuming and inconvenient. Today, due to this app created by using Visual Studio and Xamarin, The World Bank can gather data from its client base on tablets while maintaining extremely high levels of confidentiality.

APX is all about fieldwork. The brand created an app using Xamarin in a bid to overcome the limitations faced by workers who don’t sit behind a desk. This app is specifically for the field workers working for this company. With this application at their disposal, the workers doing their jobs on the field can manage many things, apart from operating matters via speech and hand gestures.

When compared to the massive plethora of cross-platform technologies currently available, Xamarin will always find its place at the top because of its versatility in offering efficient solutions. If you have been going through this write-up from the beginning, you know that it can save both time and money. After all, developers can use the same codebase to build applications for Android and iOS.

Additionally, with the appearance of the latest and more advanced version of Xamarin, developers can use the same codebase to work on the visual elements too. With it, the process of maintenance will get easier, effective, and efficient that will further reduce the cost of development. Naturally, Xamarin is your best bet at saving two of the most valuable resources known to humankind. It’s also the main reason why brands like Insightly, Olo, and Fox Sports opted for Xamarin to build their applications. So, when it comes to cross-platform development, you should always root for Xamarin and hire dedicated xamarin developers. If you have any more questions, don’t hesitate to contact a reputable app development firm at the earliest.

Protect Your Business App Idea By Patenting It First »

« Onshore, Offshore, Nearshore – Which Outsourcing Model Is Right For Your Business?