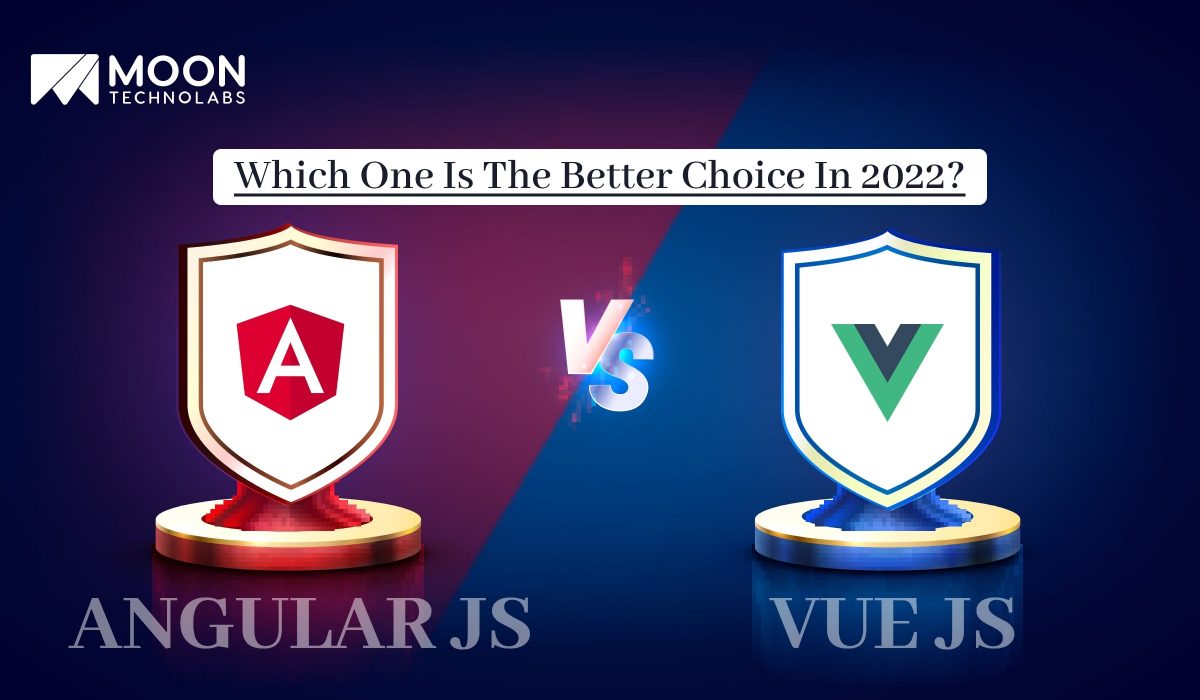 Frameworks for the front-end development of apps have been constantly evolving throughout the last decade and dramatically so. Some of them have altered the sphere of front-end development profoundly. Angular.js and Vue.js are two of the most preferred frameworks of the present day and age. You can pick the right one only after comparing the two.

JavaScript frameworks have been evolving surprisingly fast since the release of jQuery back in 2006 designed for developing interactive web applications. Since then, there has been a rise in the trend for creating organized frameworks for front-end development.

Due to this evolution, it has become possible for developers to introduce single-page applications to the world. These web apps can rewrite web pages dynamically without loading new ones.

SPAs are quite popular these days, and the evolution of front-end frameworks gave the world a stable, long-term web framework called Angular. It came out in 2016, which is a full-fledged, rewritten version of Angular.js. Angular is a standalone framework with several built-in features without affecting speed or size.

Then, in 2014, one of the former members from the core creator team of Angular made a breakthrough by introducing Vue. It’s a progressive framework for front-end development used in building complicated user interfaces used explicitly for creating views.

You may be thinking about working with an angular app development company, but both frameworks have incredible abilities. That’s why you should check out the two before you make a decision.

Angular is a JavaScript framework based on TypeScript that helps developers create scalable web applications. This standalone framework for front-end development has inbuilt tools and libraries. The presence of so many components doesn’t affect the size or speed of the framework.

This one is a flexible and lightweight framework based on JavaScript that offers state-of-the-art tools for web app development. Developers can also use Vue to create modern SPAs. Experts believe that Vue is versatile and progressive as it facilitates change creation in the code of various apps without influencing any of the core features.

If you’re looking for an angular app development company, you need to know how it’ll fare against Vue development for your project. This section of the write-up will focus on the advantages and disadvantages of both frameworks.

Angular has been receiving support from Google for a long time and will continue to receive it. Additionally, the presence of Google adds to the possibilities of the expansion of the framework with enhanced developmental features.

Angular is famous among developers for its incredibly high performance. This performance gets ensured by the Ivy renderer, differential loading, hierarchical dependency injection, Angular Universal support, and AOT compiler.

Even with an architecture based on components, managing them can be somewhat repetitive. That’s why this framework makes front-end development too verbose for the community.

Shifting from Angular.js to Angular can be a challenge for developers. It’s especially true when the application of the framework becomes vast. Additionally, learning the techniques of using each version adds to the steepness of the learning curve.

Due to the necessity of abstractions, boilerplate codes, and other bundled features, even the simplest and smallest applications can become larger than they should.

Transference or integration of Vue is easily manageable because developers can introduce the framework gradually into the code while working on the components. In other words, it prevents developers from wasting time.

With Vue, it isn’t difficult to write boilerplate code, especially when developers use the built-in solutions to produce state support for component and animation management.

When a new version of Vue appears in the market, the framework becomes faster and lighter. Vue’s ability to optimize lets developers prioritize adding more features to an app instead of tweaking codes or debugging it.

The community of Vue suffers from linguistic problems. As it’s primarily popular in locations around China, most of the discussion forums are in the Chinese language. Naturally, native English speakers never get much help from the community.

Vue has a two-way binding nature, and it comes in handy when creating and syncing components across applications. It also contributes to data chunk rendering or features or parts trigged by the DOM.

It’s always beneficial for developers to use a framework that’s flexible and customizable. Then again, too much of a good thing is never worthwhile. The flexibility of Vue is more than necessary. It confuses developers by offering them too many options.

Now, it’s time for you to check out the performance standards of both front-end frameworks.

If you’re willing to hire angular developers, you have to know where this framework stands in terms of performance. Angular has already won the hearts of numerous developers with its superior performance. The Ivy renderer bolsters the ability of the framework, which is the rewritten version of the rendering engine of Angular.

The problem regarding Vue’s performance is that it suffers from uncertainty whenever the creators add a new feature or extend a component. They can make Vue load slower than usual. Fortunately, it has a virtual DOM that serves as the default tool for performance optimization of an application.

Business owners should hire angular developers or Vue developers only after determining the scalability aspect of the framework of their choice.

Thanks to the continuous support received by Angular from Google and several other established corporations, it’s now a full-fledged framework that can help developers create enterprise-level solutions. Such an improved level of scalability is the result of the powerful CLI of Angular.

Vue is a lightweight framework often preferred by developers when creating small applications. These apps, however, won’t be scalable, even if Vue can extend it with the flexible tools it possesses. It’s somewhat unbelievable that this framework can make an app scalable, at least to a specific extent.

What if you want to build a complicated web app? If you hire angular developers from Moon Technolabs, can they deliver what you need? Or do you need to look for Vue developers?

Angular is effective enough for building complicated solutions for commoners and large-scale enterprise apps for business owners. Some of the most renowned apps fabricated using Angular include household names like Forbes, Gmail, and PayPal.

When it’s about creating complicated solutions, using Vue can be more challenging than Angular. The coding aspect on Vue becomes more difficult when developers use it to create complex applications. Developers have to come up with a code that will link all the underlying components, but Vue will make it problematic to standardize the component order.

Angular has been evolving constantly and rapidly with new updates and extra functionalities. These features work together to increase the speed of development. They also facilitate an effortless environment of development combined with a smooth user experience.

Of course, you can always resort to vue.js development services if you hope to create something smaller and non-scalable. Vue displays technological soundness when it’s about building UIs and solving difficult problems. Also, Vue isn’t as popular as Angular, even with a strong backbone.

You mustn’t let the aforementioned statements deter you from vue.js development services offered by Moon Technolabs. None of the statements define the future of Vue because it already has a robust ecosystem and an all-inclusive syntax. Developers from multiple parts of the world want to adopt the framework, even after the presence of platforms like Angular.

How much do Angular and Vue developers charge for their services?
Angular developers charge somewhere between $10 and $150/ hour, but you won’t find too many Vue developers out there. That’s why it isn’t possible to determine how much they usually charge for their services.
Which framework is easier to learn?
Angular is a massive framework for front-end development. Understandably, it has a steep learning curve. However, Vue is the easiest JavaScript-based framework. Experienced developers can contemplate the intricacies of Vue within a short period.
What about code maintainability?
Due to the documentation-style guide and CLI, code maintainability on Angular is higher than Vue.

« What Do You Need To Know About gRPC On .NET?