Android App Development Trends That Grabs Your Attention In 2021 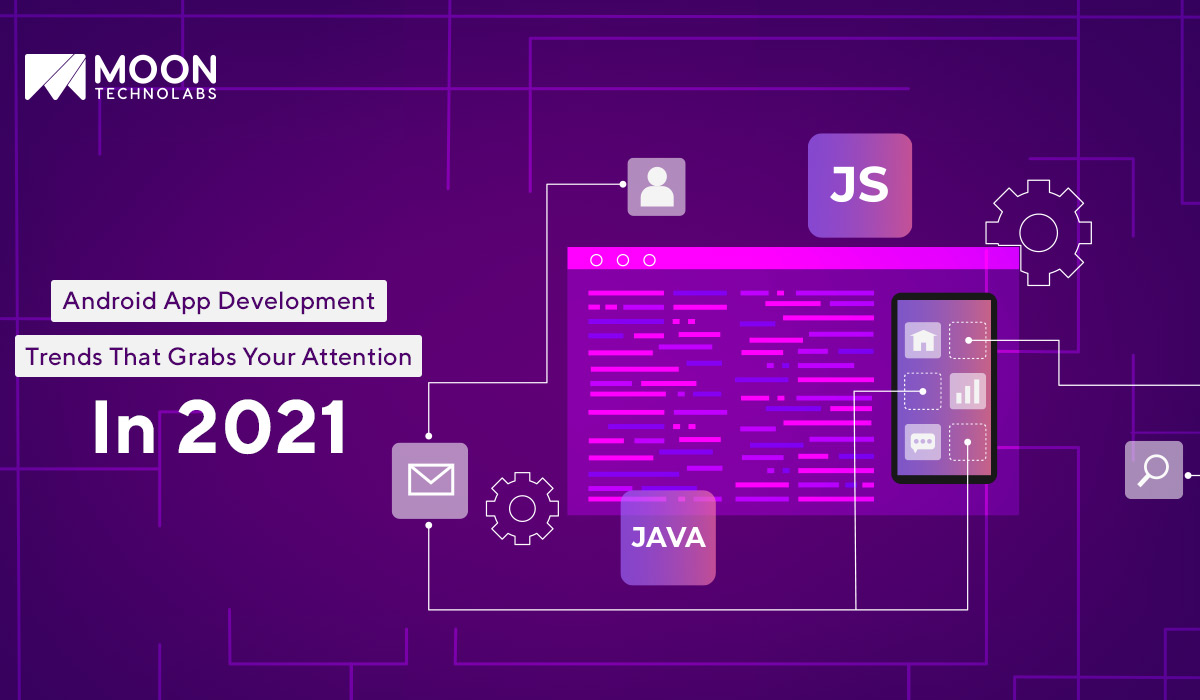 In terms of applications for mobile devices, Android app development usually acquires the top spot. Android apps are exceptionally user-friendly. Naturally, they will rule 2021. However, due to the ever-changing demands of the customers and the supply of products and services, new technologies and trends will frequent this sphere of app development, just like it did this year and the year before it.

Everyone, even a layman, knows that Android is the most popular smartphone OS. It currently holds 85% of the entire share of the market, and the Google Play Store is full-to-the-brim with more than three million applications.

It’s the fame of Android that makes every developer choose this platform to create apps for mobile devices. Every app on the Google Play Store is surprisingly user-friendly. The numbers mentioned earlier prove that Android will lead the entire app development industry.

New trends and technological enhancements keep on appearing with every passing year to enrich the platform even further. So, if you’re going to contact a provider of android application development services in 2021, then you should know about the latest trends of Android before anything else.

Here are a few trends worth mentioning.

(1) Blockchain: You probably heard about the term “blockchain,” but you may not know what it means. It’s a decentralized platform that enhances transparency and gets rid of unauthorized access. It also boasts of having powerful security protocols. Integrating blockchain systems in Android apps is now possible. Business segments, such as banks and currency exchange centers, can benefit immensely from it. Researchers say that around 84% of companies all over the world are already utilizing blockchain technologies.

(2) Instant apps: Despite being a familiar name in the world of Android app development, the popularity of instant apps is continuously rising. An instant app is something that allows a user to explore some of the features of the application without installing it immediately. The speciality of Android instant apps makes them perfect for e-commerce companies and smartphone game developers.

(3) Flutter development: This one is a relatively new form of technology used by the best android app development company. Its immense power can make it the future of developing apps for the Android platform. The framework of Flutter lets a developer create applications using native interfaces for both Android and iOS. The flexibility of Flutter makes it a favourite of many developers all around the world.

(4) AI and ML: AI stands for Artificial Intelligence, while ML is the abbreviated term for Machine Learning. After the arrival of cloud computing, organizations gained incredible computing strength.

Today, they create AI models for augmenting usual procedures or manage tasks that seemed too difficult in the past. According to the experts of a world-renowned company, the presence of AI-powered systems can be influential enough to boost productivity by almost 40%.

(5) 5G: As you can probably imagine, 5G will outrun 4G in terms of speed, just as 4G defeated 3G. 5G is so powerful that it will offer data speeds of 100 GBPS. At the moment, 1.4 billion mobile devices are running on 5G. Make sure that you ask your providers of android application development services to make your application 5G-compatible.

(6) IoT: IoT or the Internet of Things is another buzz-word. A smartphone is the most important gadget for every individual. It stores emails, contacts, and other crucial pieces of information. With the arrival of applications and the ever-rising popularity of smartphones, manufacturers started working on smart-watches, sports bands, smart televisions and specific wearable devices. IoT will keep every device connect, and the user will be able to operate other machines through his/her smartphone.

(7) Beacon tech: Many business companies are using Beacon technology right now because it helps them in targeting their prospects. Beacon devices are primarily for transmission purposes. Whenever a mobile device comes with range, the Beacon machine will connect with it. In doing so, the owner of the business will be able to send notifications and inform the prospects about their presence.

(8) The Kotlin multi-platform: Not every android app development company uses Flutter because they now have Kotlin. The multi-platform projects of Kotlin will make the task of developers simpler. However, it’s just an experimental feature that they can access in Kotlin 1.2 and Kotlin 1.3 only. However, it will become much more accessible in the future.

(9) Jetpack: Android Jetpack boasts of an all-encompassing suite of tools, libraries, and guidelines that can aid developers when they work on technologically advanced applications. The ultimate purpose is to make regular tasks easier for them. Even Google offers structured documentation to simplify it for first-time users. The main elements of this suite include architecture, UI, foundation, and behaviour.

(10) Motion Layout: It’s a unique layout type that the developers can use to handle the task of animating the widgets and their motion. Since it’s backwards-compatible with Android 4.0, it’s an integral part of the ConstraintLayout library. It aids the team of developers in bridging the gap between complicated motion management and transitions associated with the layout. After all, it’s a tool that comes with a never-ending choice of features.

The takeaway
Each year brings something new with it, including ideas, innovations, and trends. Once you take a look at the trends described above, you will understand how crucial they are. You will also realize that Android is striding forward in making the experience of the users as seamless as possible by catering to every demand they have.

Technology Watch: Why Users Are Uninstall Your Apps? »