Xamarin Vs. NativeScript: Which One Is The Ideal Cross-Platform Framework For Your Project? 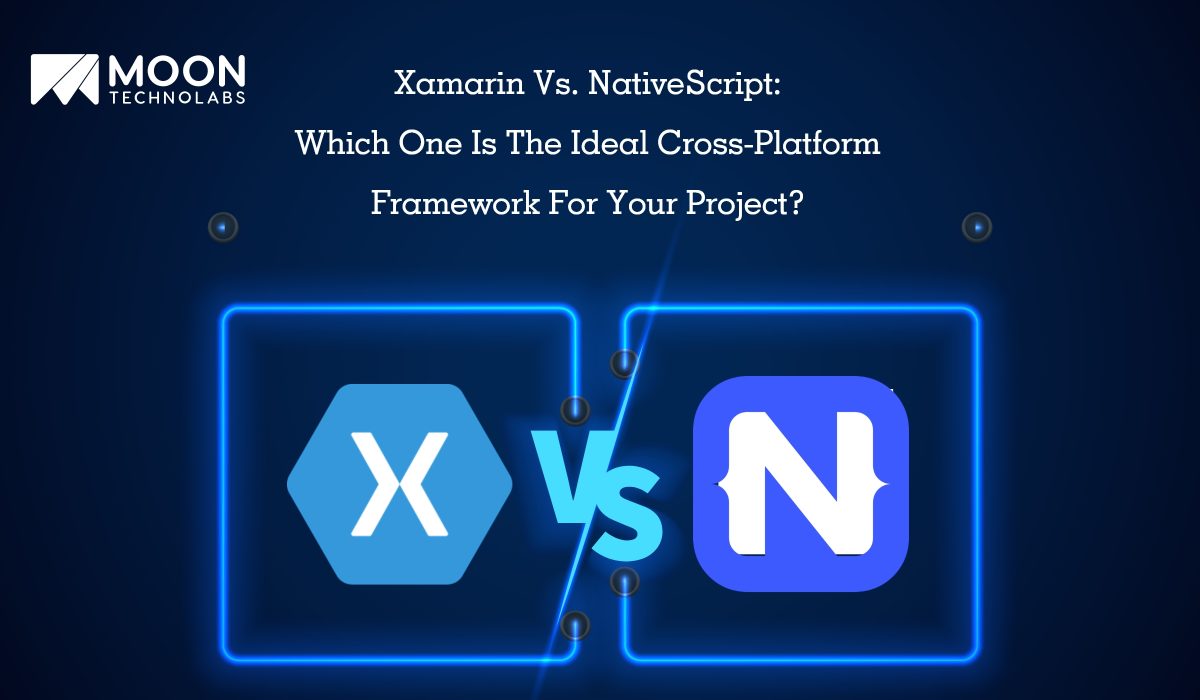 When it’s about delivering native experiences through mobile apps, experts always suggest using Xamarin or NativeScript. Both frameworks are superb in every aspect. Then again, two frameworks may look similar, but they usually have different things to offer via multiple parameters.

Today, everyone wants to adhere to the mobile-first approach, whether government agencies or private sectors. Through this approach, they’ll be able to streamline business objectives, develop agile processes, acquire client feedback, and implement complex functions.

Business firms are now more capable than ever in delivering heartwarming customer experiences via mobile applications. It has been possible simply because of the constant evolution of the various app development frameworks available these days.

Now, you’re wondering why you need to go through this write-up when you’re ready to hire xamarin app developers from a trusted app development agency.

Well, Xamarin isn’t the only cross-platform framework that deserves your attention. NativeScript is equally powerful, and you need to contemplate the differences between the two to find out which is more effective for your project.

Xamarin is a platform used by developers from all four corners of the world. It extends the boundaries of the functionality of a .NET developer platform.

NativeScript, on the other hand, is equally trustworthy and extensible. It’s also quite easy for new developers to learn and master.

You probably know a thing or two about Xamarin. It’s a well-renowned cross-platform framework suitable for developing high-performance apps with native-like features. It started its journey in 2011, but in 2016, Microsoft acquired Xamarin. Soon after that, the SDK of the framework became open-source and is now available to everyone for free.

Before you choose to work with xamarin app developers or NativeScript experts, you should take a look at the pros and cons of both frameworks for a clearer picture.

Xamarin brings down the development time as it utilizes just one tech stack combined with a shareable codebase. Developers simply need to introduce a few simple changes to publish their apps on various platforms.

Xamarin uses native toolkits and APIs to achieve native design and performance standards. As it leverages the APIs associated with the system and hardware, it’s almost impossible to separate a native app from something designed using Xamarin.

Xamarin allows developers to create applications for several mobile platforms using just one language. They won’t have to switch between environments as they can do everything in Microsoft Visual Studio.

Whenever a developer builds an app using Xamarin, they unwillingly add 3 to 5 MBs for releasing it. After debugging, this app can increase by 20 MBs.

Another problem with Xamarin is that it doesn’t allow developers to include rich graphical animations and other elements. Naturally, it isn’t suitable for building games or other graphically demanding applications.

It takes about 1 to 3 days to update the latest Android and iOS releases and integrate the same into the framework’s ecosystem.

NativeScript doesn’t widely support HTML and DOM. As a result, developers have to learn the method of using different components of the UI.

Developers have to be aware of the native functionality of Android and iOS APIs. Only then they’ll be able to access the device’s hardware and all other platform-specific elements.

NativeScript has only a handful of verified plugins. Naturally, there won’t be any assurance regarding the plugin quality used in this framework.

Now that the advantage-disadvantage section is over, it’s time for you to take a look at the performance standards of both frameworks.

Based on the results of a series of tests conducted on Xamarin to determine its performance, experts found significant differences in two of the prevalent environments of the framework. These include Xamarin Native and Xamarin.Forms.

This one presents about 90% code reusability, but in terms of app performance, it lags behind its counterparts. Apps built using Xamarin.Forms couldn’t perform as efficiently as native applications, even the most common functions of mobile apps, such as processing API requests, booting, image loading/saving, and serialization/deserialization.

When the developers of a xamarin app development company like Moon Technolabs use Xamarin Native, they yield something comparable with native apps regarding performance. In specific instances, such as SQL BulkInsert, Xamarin.Android performs better than native solutions.

The performance standard of NativeScript was never too high or too low. It stands at par with most of the cross-platform frameworks of today. Animations created using NativeScript perform perfectly at 60 FPS without any hitches. Additionally, NativeScript can offload specific long-running processes to keep the front-end balanced.

The architectures supported by Xamarin

The environment of Xamarin lets it support several architectural patterns. Unlike most of the other frameworks, Xamarin doesn’t have any limitations regarding architecture. Then again, a few patterns are usually more useful compared to others.

The architectures supported by NativeScript

Just like Xamarin, NativeScript supports MVVM and MVC architectural patterns. However, this framework also functions widely on modules, plugins, and CLI. The structure of NativeScript has several modules, and each of them is in charge of enabling a specific collection of features.

If you have a complicated project in your hand, will you opt for a xamarin app development company or NativeScript development agency?

Xamarin gets compiled natively, which makes it one of the best cross-platform frameworks to create high-performance applications. Anything built using Xamarin will look and feel just like a native application.

Compared to other frameworks, NativeScript facilitates the smooth performance of apps of all kinds, whether complex or simple. However, if you hope to use NativeScript to build an advanced solution, your developers will need additional UI and XML support.

As you can see, the information provided here is useful to every business owner, even if they have plans to hire one of the top mobile app development companies like Moon Technolabs for their project.

Researchers from Gartner describe the future of app development for mobile devices using the term “multi-experience.” With every passing day, adhering to a user-centric method of development is becoming the need of the hour.

The information provided in this write-up will surely help you find one of the top mobile app development companies for your project. Just don’t forget to research service providers to segregate the ones that can handle your project.

When should you choose Xamarin?
Xamarin should be the choice of business owners if they hope to create efficient cross-platform mobile solutions.
When should you choose NativeScript?
Business owners should resort to NativeScript when they want to create fully native apps that won’t incorporate writing boilerplate code for native APIs. If you prioritize strengthening business objectives, NativeScript will help you achieve what you seek.
Where to look for Xamarin and NativeScript developers?
Moon Technolabs is currently one of the best app development companies where you’ll find developers specializing in both Xamarin and NativeScript.

« Should You Choose React Native Or Swift For iOS App Development?