What Makes Cloud-Native The Future Of Software Development? 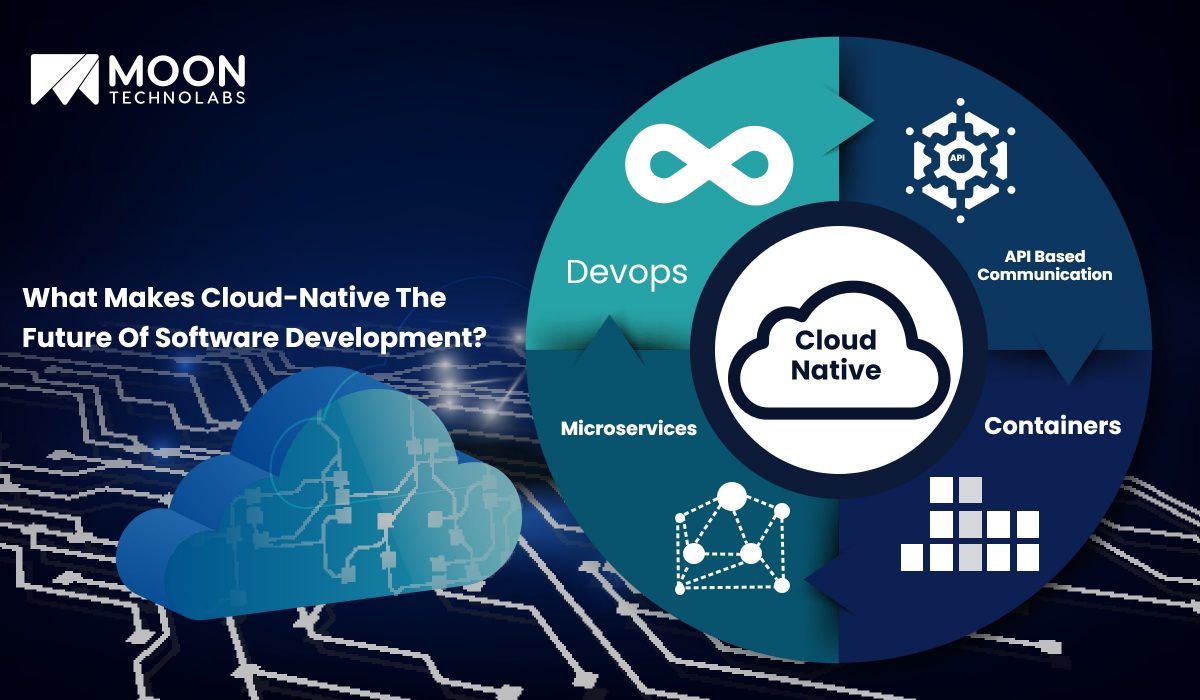 Are you at the earliest stages of transforming your business digitally? Then you still have enough time to learn about cloud-native – a modern system that has the ability to dictate the future of software development. This topic will tell you what you must know about it.

Cloud-native computing is a new-age term that popped up as a buzzword for all the tools and methods needed by software development experts to create, publish, and maintain the software programs on a cloud-based infrastructure. This topic aims to elucidate how a custom software development company utilizes the landscape of cloud-native. Here you’ll find an in-depth description of the term. You’ll also learn about the perks and pitfalls of using cloud-native.

Cloud-native is fundamentally a modern method of building and making a software application operational. It leverages the scalability, resilience, and flexibility of cloud-based computing. This system encompasses all the tools and methodologies the software developers of today to develop applications for cloud systems available to the general public. Unlike traditional cloud architectures perfect for on-premise data centers, this one is perfect for commoners and business owners.

Only the best custom software development company designs and runs software programs using cloud-native systems. According to experts, a group of renowned organizations pioneered it and describe it as something borne by the cloud. Some of those organizations include household names, such as Spotify, Netflix, Uber, Airbnb, and a few others. Since then, the approach of building software programs through cloud-native has become quite popular among numerous other organizations aiming to gain the same level of digital ability and competitive advantage.

CNCF or Cloud Native Computing Foundation explains this system using narrower words. It says that the system focuses on containerizing applications. It basically incorporates breaking down an application into micro-services and packing the same into lightweight containers. After that, the developers will deploy the broken-down application and orchestrate it across different servers.

CNCF further says that cloud-native tech empowers all organizations to develop and run applications that are scalable in new-age, dynamic environments. Such applications will work on every type of cloud system you can think of, including hybrid, private, and, of course, public clouds.

The shift brought forth by cloud-native in software development procedures witnessed an entirely unique landscape dominated by open-source tools. Before you hire dedicated developers with expertise in cloud-native, you need to contemplate the layers of the same.

The uppermost layer of the stack of cloud-native prioritizes the tools developers use to create software programs, including messaging systems, databases, container images, and CI/CD pipelines.

The second layer involves provisioning for the stack of cloud-native. It includes everything needed to develop the environment where the software program will run and securing the environment as well. Ideally, it has to be repeatable. In the sphere of cloud-native, it primarily involves taking care of the infrastructure like the code used in building the program, keeping the images in a depository, automating the build, and taking care of the security requirements of the application via vulnerability scanning, other than policy and key management and tool authentication.

This layer is all about the components that run an application designed on the cloud-native system. One of the runtimes worth mentioning is the container runtime. Usually, it’s always the Docker. Other runtimes include networking and storage.

The layer that incorporates management and orchestration connects the tools needed for deployment, management, and scaling the containerized apps, along with scheduling and orchestration. In most instances, a dedicated software development team resorts to Kubernetes and service proxy, service discovery, service mesh, and API gateway.

Other than the layers described above, it’s vital for developers to implement practices concerning the ability to observe. That’s why they monitor the services as effectively as possible. A few organizations even choose to bring all stacks together to create a self-serving internal platform for developers. They even do it to buy opinionated PaaS from vendors to ease the adoption process for the builders of the software program.

Developing cloud-native software programs require an entirely different architecture compared to the one needed for developing conventional business applications. The latter mostly runs on a data center that exists at the business premises. If you continue reading, you’ll find the differences and perks that make cloud-native software programs better than their traditional counterparts.

On-premise software programs designed to run on the servers based at the office of the business utilize traditional programming languages, such as enterprise Java, C, C++, C#, and other similar ones. Cloud-native programs, on the other hand, utilize web-centric languages, including CSS, HTML, JavaScript, Node.js, Go, .NET, Python, PHP, and Ruby on Rails. Using modern platforms and programming languages can prove to be exceptionally beneficial, especially if you want to invest in HIPAA compliant software development services.

Cloud-native programs are popular for their availability, resiliency, and ease of updating. On-premise programs, on the other hand, usually receive updates only one or two times every year. To do that, developers use the waterfall methodology. The ease of updating these programs gives you a significant boost in terms of productivity. The same goes for the development team working on the project. Every member of the team will be able to focus on competitive advantage and deliver the latest features to every customer in greater frequency.

Among all the advantages of cloud-native systems, one is the elasticity it possesses. It can flex the consumption levels based on demand. On-premise programs, on the other hand, will need provisioning in the form of extra infrastructural enhancements, and the developer team has to do it physically to ensure it becomes more scalable. As you can probably imagine, it results in extra expenses. After all, the cloud asks users to pay for whatever services they need. You can avoid this expensive over-provisioning with cloud-native.

When you use a cloud-native software solution, you’ll find that it works seamlessly in every virtualized space. It can share resources with one or more programs due to its multi-latent model. This feature boosts the efficiency of the team in charge of developing the software program.

If you know a thing or two about cloud-based systems, then you’re probably aware that it always provides greater redundancy because of its geographical spread and scale. Hyper-scale cloud vendors are in charge of managing the datacenters. Understandably, if there’s an outage, cloud service providers can manage the issue quickly by redirecting web traffic to an entirely different region. It means you won’t have to worry about dealing with expensive downtimes.

With cloud-native software programs, you’ll get to open more paths of automation opportunities for your business. Even the engineers working on your project will be able to leverage the perks of this feature. They’ll build the program and focus on other pressing challenges almost immediately.

All applications built using cloud-native systems are stateless. It just means that they won’t carry previously saved information from one session to the next. This feature bestows upon you the opportunity to scale across several servers with ease. It’ll even allow you to cache easily to get a profound boost in terms of performance. Store space won’t be a problem, either. Furthermore, you won’t need to bother with vendor lock-in problems – an issue that scares every business owner like you.

Of course, a few challenges do exist in the sphere of cloud-native software development. For instance, many business owners make the mistake of lifting and shifting an on-premise software program to a cloud-native system without changing the architecture. Then again, tampering with existing architecture in a cloud-based software solution comes with a new set of issues.

You need to seek out the best specialists with expertise in HIPAA compliant software development. Only these people possess the skills needed to perform the task described above. They can help business owners like you to adapt to security models appropriate for cloud-based systems.

All the concepts and ideas associated with cloud-native computing brought forth new ways of implementing complicated yet scalable systems. Even if you aren’t thinking about hosting your customized software program on a cloud-based platform at the moment, the cloud-native system will eventually influence the way you and other business owners like you invest in software development in the future.

10 Most Heavily Used E-Learning Apps In The USA »

« Laravel Vs. Node.js: War For The Backend