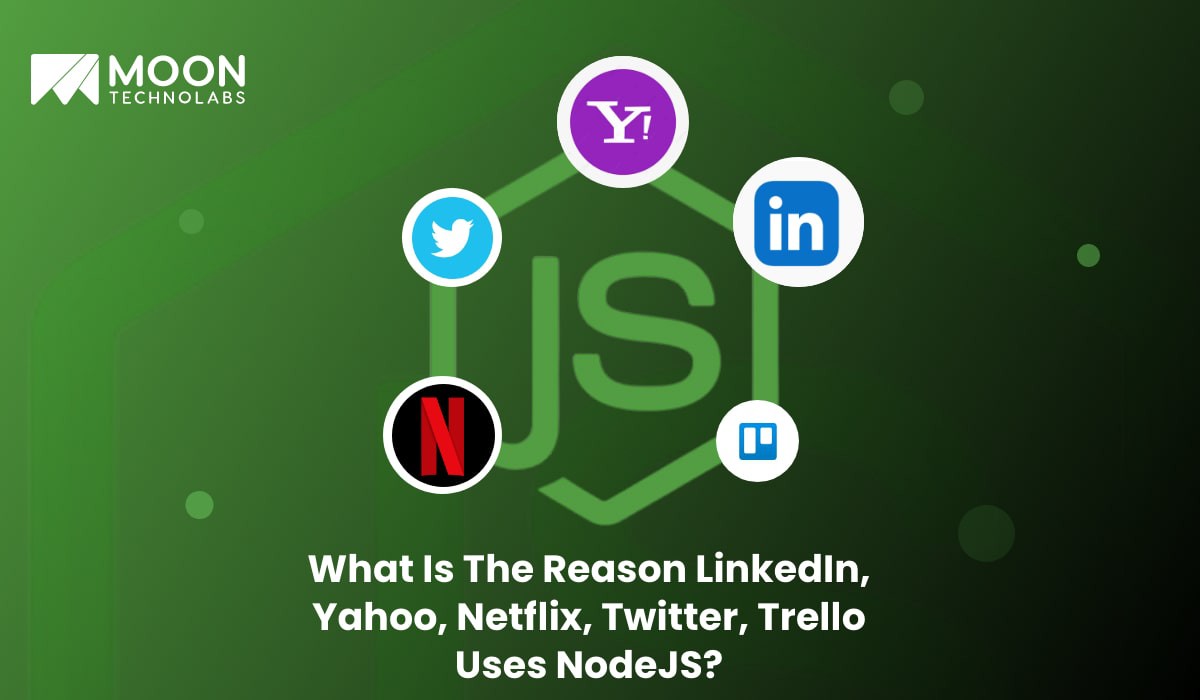 Node.JS first appeared in 2009. Since then, its environment has managed to carve a niche in various enterprises. Some of the most renowned and recognized brands are using it for their applications and websites. This fact is proof of the genuineness of the hype that surrounds Node.JS. Here you’ll learn why it’s popular among brands.

Node.JS is nothing but a server environment for JavaScript that can run code outside a browser. This feature of Node.JS makes it perfect for hundreds of websites, particularly games, social media apps, video streaming, time trackers, etc. Node.JS can offer a scalable yet fast solution for all real-time applications.

Today, this technology has become exceptionally trendy. Numerous companies adopt it, including some of the most recognized players, such as Yahoo, LinkedIn, Trello, Netflix, and Twitter.

Not just a leading node.js web development company but trustworthy market researchers have evidence to prove that Node.JS is the foremost leader in the field of technology. It holds about 50.4% of the market share. So, what’s the reason behind its popularity?

According to the newest report generated by the creators of Node.JS, this technology can substantially affect businesses. It can increase the productivity of the developers by 68%, application performance by 48%, and customer satisfaction by 13%.

A favourite of developers

You don’t need to look for a leading node.js web development company just to find out why the developers there love to use it. Almost every development agency has specialists who favour Node.JS over everything else because this environment is easy to worth with. It even enables code execution on the server-side. Apart from that, it facilitates high scalability and fast development cycles. Finally, it’s the go-to tech that has a robust open-source community.

Which companies resorted to node js development services for their products? Here’s a list of those brands and how they benefitted from Node.JS.

In the beginning, developers working with Yahoo were using it for insignificant purposes, such as uploading files. Sooner rather than later, the brand decided to make a big investment. The primary challenge faced by Yahoo was about maintaining the same codebase on both the server and client sides. In that regard, Node.JS became the perfect solution. It allowed the company to release Cocktails, a project aimed to eliminate the multi-language scenarios, which, in turn, simplified the developers’ lives. The project primarily uses Node and JavaScript to run one codebase on the server and client-side with an environment hosted by Node.JS.

LinkedIn is a networking platform for professionals, and almost everyone knows of it. It’s among the brands using Node.JS. For instance, they used it to build the server-side of the platform’s mobile application. LinkedIn shifted the backend of the app from Ruby on Rails to Node. Why did they make this transformation? They did it because they wanted better performance and scalability. The app designed using Ruby on Rails was synchronous. Clients had to make multiple calls for just one page and all those calls took place sequentially. Each thread had to handle one request at a time. Node.JS, on the other hand, allowed the developers working with LinkedIn to transition to an asynchronous event system where a client will make a single request for every page. It resulted in the company using four servers instead of fifteen. Also, the traffic capacity became double of what it was before. Finally, due to Node.JS, the app now works two to ten times faster.

Back in April 2017, Twitter released a different version of its social networking app with minimum functionality and named it Twitter Lite. The speciality of this application is that it can work even if the user’s internet connection is slow. Moreover, it can reduce data usage, increase resiliency on undependable mobile networks, and occupies less than 1 MB on any device. To create such an app, the team of Twitter used Node.JS to create, test, and deliver this application. Before using Node.JS, the company used another piece of technology on the backend. As a result, it had to spend a lot of time resolving operational problems. Node.JS allowed Twitter’s engineers to use the same tech while increasing productivity. They spent more time building the app instead of fixing issues.

By now, you can probably acknowledge the reason why you should hire top nodejs developers, but this list isn’t over yet. The next company using Node.JS is Trello, a project management tool that has a client base consisting of 25 million users spread across the world. It has to depend on event-driven technologies that can manage several open connections simultaneously. Trello is one of those brands using Node.JS for its server-side, as well as a tool for prototyping for building single-page web applications.

Not many people can claim they never heard of Netflix. It’s the world’s provider of constantly flowing television and broadcast, and it earned fame and popularity because of Node.JS. Previously, Netflix resorted to Java to create the backend and JavaScript for the frontend. Understandably, it required developers to be proficient in programming languages. It even forced them to do more work to track activity, solve errors, and debugging purposes. At the moment, Netflix is one of the numerous companies using Node.JS for the following reasons.

The next company worth mentioning is PayPal, the world’s most favoured online payment platform. In reality, it’s one of the first companies that used Node.JS in production. Like Netflix, they were using Java and JavaScript for the back and frontend respectively. In a bid to test the technology, PayPal started with an attempt to develop a prototype. The firm allocated this task to two different developer teams. One of those teams was using Node.JS, while the other resorted to Java. The Java team had five developers, while the Node team had only two. Within a short period, the Node team caught up with the Java team even after having just two members.

The matching system of Uber creates an incredibly large amount of supply notifications for drivers and demand requests for passengers. Ride requests help in choosing the driver via the matchmaking procedure. The drivers remain in a geospatial database that gets updated constantly by each driver active on the network while commuting around the city. Uber direly needed a system reliable to the passengers and drivers. The company pointed out a few reasons for picking Node.JS. As soon as they hired the providers of node js development services, they started processing huge amounts of data swiftly and reliably. Additionally, Node.JS made error analysis and code deployment convenient and fast. Finally, it benefitted significantly from the ongoing improvement of the tech due to its open-source community. Now, Uber has the power to process more than two million remote procedure calls every second.

Even NASA belongs to this list of companies, but unlike others, they utilize Node to ensure the safety of the astronauts during cosmic expeditions. NASA realized it needed something better when an incident happened. The safety of one of the astronauts was jeopardized due to unreliable data hosting in multiple locations. After that, the engineers of NASA decided to take appropriate measures and develop an end-to-end data system. They transferred their data concerning EVA spacesuits to one unified cloud database. The results of their choice include the following.

If you found these stories of incredible success tempting, then you shouldn’t hesitate to hire top nodejs developers. With this system, you get superb performance, scalability, versatility, proxy server ability, smooth implementation of changes, super-fast development process, non-blocking I/O paradigm, fantastic processing speed, data streaming, the ability to handle numerous connections, the possibility to build both frontend and backend of applications, an uninterrupted connection between app and server, and more. So, what are you waiting for? Get in touch with a reputable development agency right now.

Why Are Grocery Stores Suddenly Digitizing Their Business With Mobile Apps? »