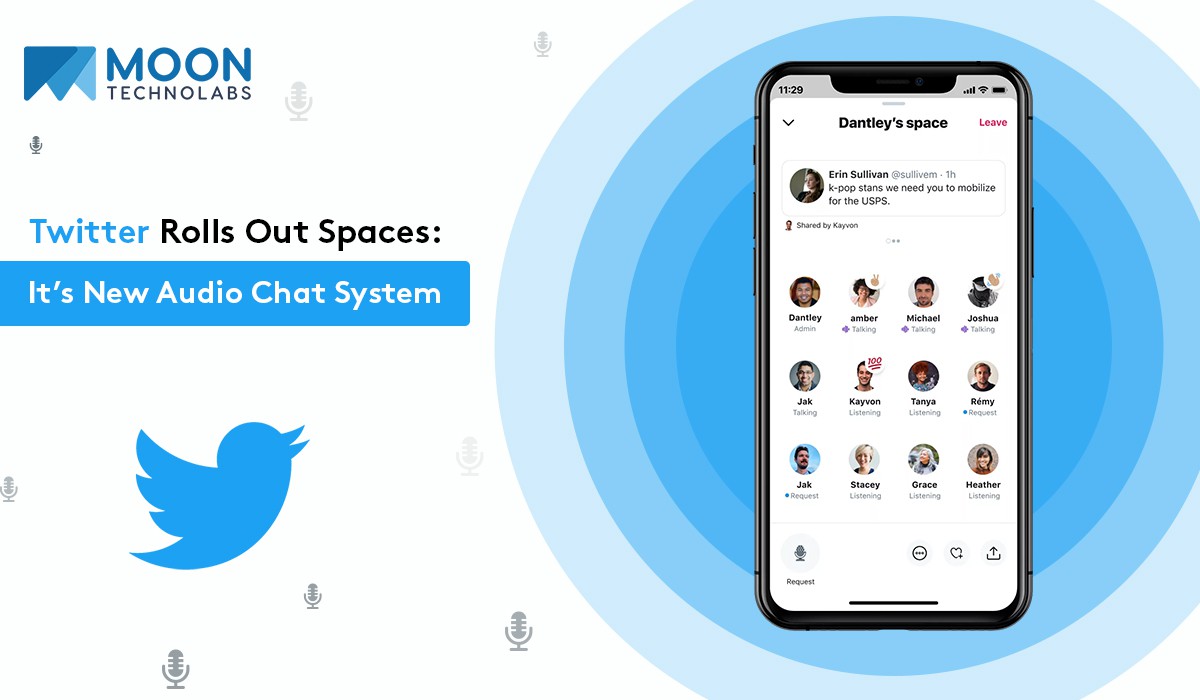 Twitter completed all tests and released its Spaces system, a voice-based chat room that it announced to bring last year. They even informed that only a handful of users will get a chance to use it, but, theoretically, anyone can join them. Here you’ll learn about Spaces and what it’s all about.

If you’re about to hire an on-demand development team to undertake an ambitious project like creating a Twitter clone, you need to stop for a moment and go through this write-up. Of course, if you’re well-aware of this social media giant’s voice-based chatting system, you can save yourself the trouble. However, if you never heard of it, this topic is extremely important to you.

Twitter Spaces is this company’s latest audio-based chat room system. A version of it was available to iOS users, but not to Android device holders. Today, however, even they can use it. The creators of Twitter and Twitter Spaces launched it for Android users some time ago. It’s a Clubhouse-like system where folks can host a parley in this voice-based chat room, or join one.

You can always hire an on-demand development team, but if your clone app doesn’t have a system like Spaces, it may face difficulties in attracting users. Twitter creators started beta testing of Spaces back in December 2020. Up until the early days of this year, this audio-chatting feature was available to only a small group. The people of that group had to provide feedback on what it’s like and how it feels.

As already mentioned earlier, Twitter Spaces will bring forth voice-based communication systems on the Twitter platform. It will let users join host voice-based conversations on Twitter. Basically, a user can create a personal “Space” that his/her followers can join and participate in conversations. However, it’s worth mentioning here that only 10 people can partake in one such group discussion at a time. If you hire dedicated and experienced developers, make sure you include something similar in your application. You also have the opportunity to increase the number of users that can join the room and eliminate the limitations preventing Twitter from including more participants.

Based on what Twitter released on one of its support pages, Spaces is where people can come together. Its pillars are nothing but the voices of the folks using this social media platform and their communities. Spaces will be live for as long as there’s a participant. After ending it, the conversations won’t be available to the users of Twitter.

Twitter Spaces bears a striking resemblance to another audio-based social media platform called Clubhouse. Clubhouse, however, is available on iOS devices only. It also works by following an invite-only basis.

Today, Android users can use Twitter Spaces, now that the testing procedures are over. Testing began some time ago, but it’s over. During the earliest days, Spaces was available to iOS users only. When you hire dedicated and experienced developers, you’ll have the opportunity to build it in such a way that it’s available to both Android and iOS users. Then again, if you want to make it available to Windows phone users, don’t forget to weigh the pros and cons of such a move.

At the moment, Android users will experience functionality-related issues. For example, they can’t create their chat room or “Space” as of yet.

The methods of using

Now, it’s time to take a look at the process of using Twitter Spaces.

You can initiate Twitter Spaces by pressing and holding the compose button. After that, you need to tap the Spaces icon that will appear on the far left.

You can start Twitter Spaces in another way. You just have to tap on your profile picture in Fleets and make your way to the far right. There, you’ll find Spaces.

As of now, you can invite just 10 people to join your “Space” to discuss things, share information and thoughts, send emojis, etc.

A user who initiates “Space” can choose the people who can join it. The same user will determine the participants who will enjoy speaking privileges. He/she can fiddle between options to include “People you follow,” “Everyone,” or “Only people you invite to speak.”

Once everyone joins, you can tap on Start to initiate the “Space.”

Just keep in mind that Twitter Spaces will be available to the public for now and will appear in a user’s followers’ Fleets. Every “Space” will have a public link the user can share. While anyone can join a “Space” as a listener, nobody other than the user can control the speakers. Additionally, it won’t be possible to remove, block, or report any of the speakers. One last thing you need to know is that the accounts protected by Tweets won’t be able to build a “Space,” but they can participate and speak in another individual’s “Space.”