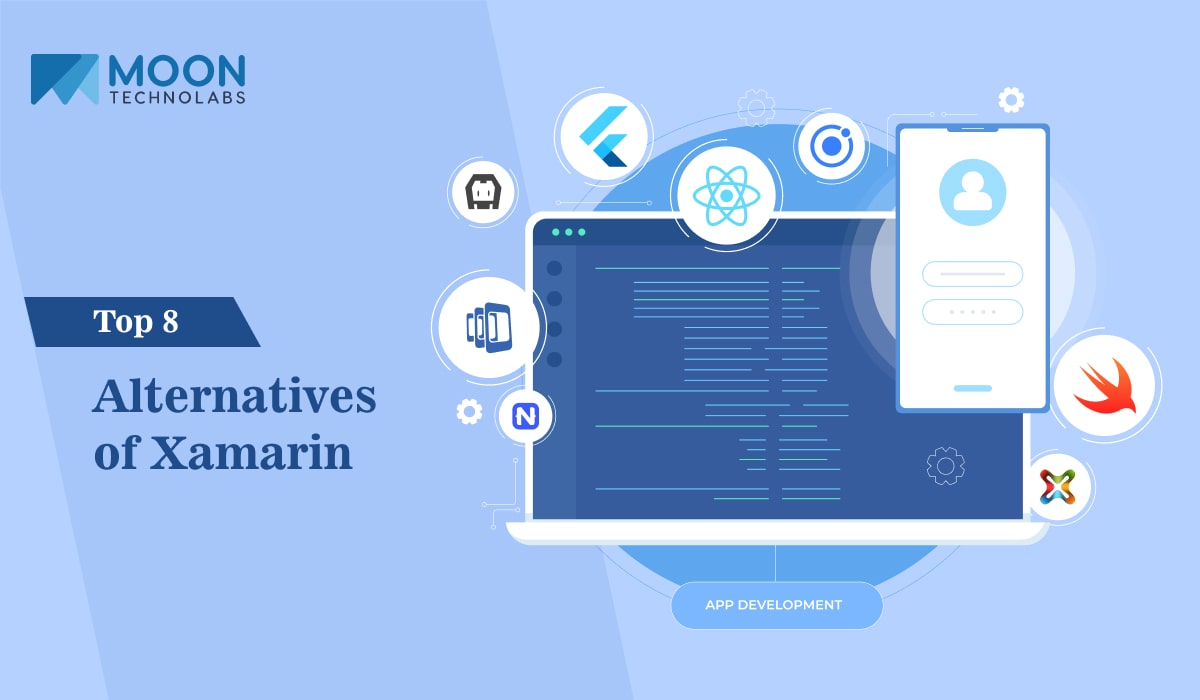 This write-up contains information about the best substitutes for Xamarin. You may need to use one of them if your preferred platform fails to accommodate your project.

This topic discusses some of the best Xamarin alternatives currently available. It also contains the advantages and disadvantages of each framework.

Since the arrival of mobile technology, the lives of people have become easier. Folks who own a smartphone can access the internet whenever they want or need to. A more specific statement would be that mobile technology gave rise to innumerable applications. By using them, you can manage various activities, including ticket booking, banking, watching live telecasts, etc.

Mobile apps are mostly available on two platforms – iOS and Android. Xamarin is a cross-platform framework of mobile app development that reduces the expenses of development. As the owner of a business, you can invest in a digital product for your organization or your customer base.

While the cross-platform feature of Xamarin makes it attractive, it may not be suitable for your project. Of course, only trained and experienced developers can decide whether you’ll benefit from this framework or not. If they feel that it isn’t the best choice for your digital solution, you can use one of the Xamarin alternatives described here.

Before you explore your choices, here’s a basic explanation of what Xamarin is all about. It’s an open-source app development tool for building apps for both iOS and Android. It comes from the esteemed and world-renowned house of Microsoft. Xamarin uses C# and .NET to manage the proceedings of app development.

.NET works as the base platform of app development, but Xamarin brings prowess to a project, particularly when building specific types of applications. The framework leverages an extra set of tools and libraries to increase the limitations of the .NET platform for app development.

Now, Xamarin is powerful enough to extend the functionality of .NET, but various substitutes are available these days. A few of these alternatives allowed developers from all four corners of the world to belt out incredible results. In reality, some of these results were much better than the ones yielded by Xamarin.

Without dilly-dallying any further, this topic will delve directly into the Xamarin alternatives that deserve your attention. You can always choose Xamarin if you prefer. Then again, if it fails to accommodate your project, the following options deliver what you seek.

React Native doesn’t need an introduction. It’s an extremely popular JavaScript framework with an open-source nature. Developers use it to create apps for Android and iOS devices. Instead of targeting the browser, apps built using this framework prioritize the platform for which the developers create them.

As it’s an open-source platform, it’s possible for developers to share the code easily between platforms. That’s why it’s easier to build apps for several mobile operating systems at the same time. Developers use JavaScript and JSX to write codes. JSX is an XML-Esque markup language.

The next option among Xamarin alternatives for you is Cordova. Just like Xamarin and React Native, it’s an open-source app development framework. It uses JavaScript, HTML, and CSS. Cordova is perfect for building apps that use the hybrid features of mobile devices, such as the file system, geolocation tagging, camera, etc.

Flutter is yet another open-source framework that also happens to be one of the best Xamarin alternatives. Developers speak highly of Flutter because it comes from Google and they can use it for free. Of course, these aren’t the only plus-points of this framework.

By using Flutter, app developers can build native solutions for iOS and Android devices. They can also be more expressive about it. Flutter providers reactive app development styles without using any JavaScript bridge. This feature makes it the only option with a mobile SDK.

Many individuals compare Flutter with React Native. However, these folks should never forget that the former uses only one codebase. The latter, on the other hand, needs HTML, JavaScript, and CSS to build applications. Flutter also boasts of numerous customizable widgets that can support a new-age reactive framework.

It’s possible for talented app developers to use PhoneGap to create mobile solutions for various mobile operating systems and devices, including Android, iOS, Windows, and even BlackBerry.

Despite the presence of other open-source app development frameworks, PhoneGap possesses cross-platform abilities. It also provides developers with access to native APIs. Furthermore, the backend support offered by the framework is robust. Naturally, it brings down the efforts developers have to make to achieve worthwhile results.

Ionic is popular enough to earn a place in this list of Xamarin alternatives. It’s perfect for building the front end of mobile applications for iOS and Android devices. By using it, developers can easily belt out native UIs for applications.

However, there’s something you should know about Ionic – it needs a native wrapper. Once developers have it, they can utilize this framework to run an app on a mobile device. Ionic is fundamentally a crossover of AngularJS and Cordova.

If you want your app to have slick animations combined with an attractive design, Ionic should be your choice. It’ll also allow your developers to build hybrid solutions.

Also Read : The Best Alternatives To The Ionic Framework

Swift is an open-source app development framework is a product of Apple. Launched about eight years ago, Swift is a general-purpose, multi-paradigm, and appropriately compiled programming language.

The most noteworthy feature of Swift is that it can interoperate with various types of codes created using Objective C, and it does so correctly. Swift even combines immaculately with the Cocoa Touch frameworks of Apple, and its creators designed it with the LLVM Compiler framework.

This list of Xamarin alternatives will be incomplete without mentioning NativeScript. If you ask experienced developers, they’ll say the same thing. It’s an open-source framework used by developers to create native mobile solutions. NativeScript focuses mainly on leveraging JavaScript for the process of development.

It also supports the frameworks based on AngularJS and Vue.js. If your developers use NativeScript, they’ll have to rely on third-party libraries, such as Maven, np.js, and CocoaPods. They won’t require wrappers, either. This framework uses the “reflection” feature to handle the endpoints of native APIs.

The last option on this list is called Apache Flex. It’s a stable and profoundly effective framework with an open-source native. By using Apache Flex, developers can build mobile apps for Android, iOS, and BlackBerry devices.

They can also use the abilities of this framework to create conventional software programs for desktops and web browsers by using the same programming model, tools, and codebase. This particular framework makes it easier for developers to build applications.

Developers have to use only one codebase to build different versions of an application using Apache Flex. It’s one of the most lauded advantages this open-source framework has to offer. Every piece of code created in it is deployable and reusable, regardless of the platform your developers use.

For an application to be the best in its class, you need to pick an equally stupendous framework. It’s safe to say that Xamarin is one of the best in its category, but every digital solution has an exclusive set of requirements. You need a framework and tools that can fulfill those requirements. Besides, the options described above are equally powerful, if not more.

Apart from the development platform, you need the services of the best developers and an experienced agency. Moon Technolabs is an organization that fits the description. You can also rely on any other app and software development firm. After all, it’s your project, and the choice is only yours to make. Just remember to research service providers thoroughly before hiring.

What do you need to know about Xamarin?
Xamarin is an open-source framework for mobile app development that comes from Microsoft. It uses C# and .NET to facilitate app development.
What are the problems of using Xamarin?
App overhead expenses, insufficient open-source library access, and developer availability limitations are just a few of the problems of choosing Xamarin. Also, Xamarin may not be able to support the project you wish to undertake.

How Fitness And Wellness Apps Are Transforming The Healthcare Industry In Los Angeles? »

« What Are The Best Alternatives Of Angular?