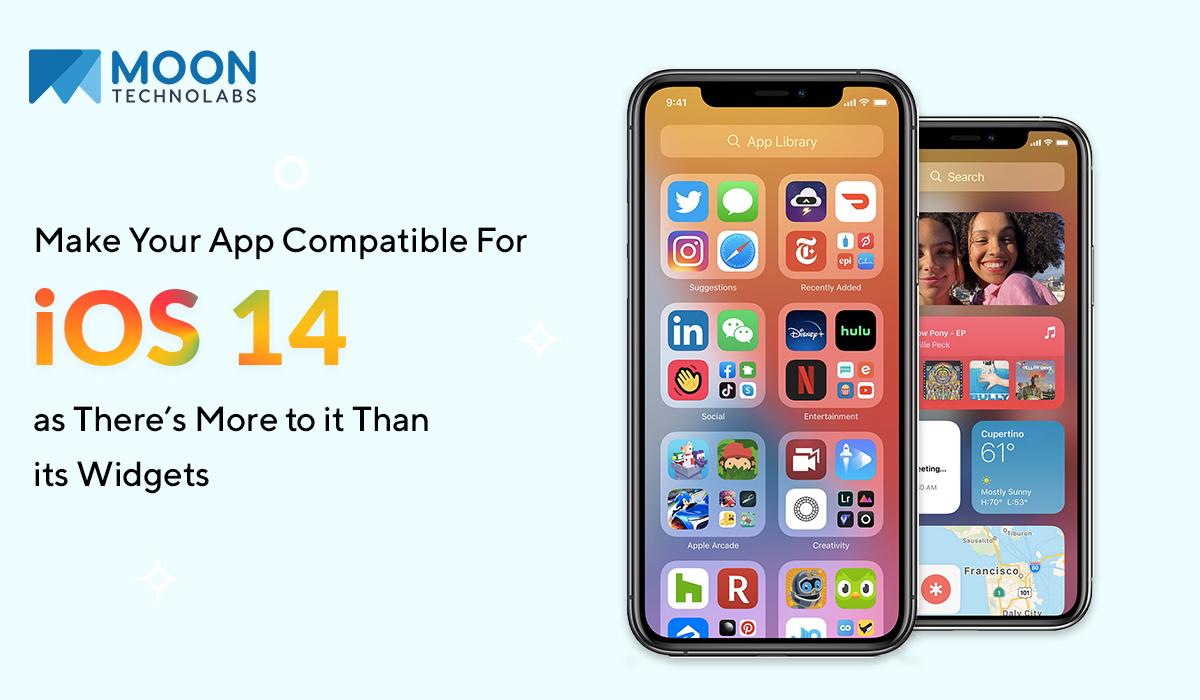 If you created your app before the arrival of Apple’s iOS 14 for iPhones, then you should know that it won’t work on the already-updated devices. Now, you may argue that there are a lot of people who aren’t using iOS 14 yet. These individuals have no problem in using your app. So, why should you bother with making it compatible with the new OS? Well, the widgets of iOS 14 and other features are already attracting hundreds and thousands of iPhone users. They will surely find a replacement for your app if they notice that it doesn’t work on their phone. Do you wish to take the risk and leave your app unattended?

Since the new operating system of Apple’s iPhones, called iOS 14, is here, you should consider revamping your app. In doing so, you will ensure that your app runs smoothly on it. Due to the high adoption rates of iOS, most users will update their devices as soon as they get an opportunity. Therefore, the sooner you hire experienced ios developers to make your app compatible with the new OS, the better it will be for you. Additionally, if you do it as early as possible, then you will get more time to address the problems and bugs that your app suffers from. Compared to Android users, iOS users are pickier. They expect every app to work flawlessly with new iOS updates.

The most significant reason to hire experienced ios developers is to ensure that your app works as your customers expect it to. App development specialists will also ensure that it doesn’t sustain outages or failures. Apart from new features, there are several other things to consider when it comes to updating an app, including compatibility, testing, and mandatory updates.

Here are a few features that your app needs. Without them, your app won’t succeed on iOS 14.

(1) App clips: If you rely on app developers, then you must remind them to add app clips. They allow users to check a few functionalities of the app without downloading it. App clips are much more discoverable, and they launch faster. Users should be able to view app clips from Messages, Maps, and Safari. They are also visible via NFC tags and QR codes. If you want users to install your app, then they can do it via the app clips.

(2) Widgets: Widgets are the main reason that made iOS 14 popular among people. Just like app clips, widgets provide users quick access to information on apps on the home screen. The widget experience of iOS 14 passed through a transition phase that allowed them to appear in many customizations and sizes. They even allow for interactive features and can update the content at opportune moments.

(3) SwiftUI: SwiftUI came out with iOS 13, but in iOS 14, it can support new view layouts, including grids and outlines. SwiftUI also has a new selection of built-in views, including a text editor and a progress indicator. There is even a new, lazy version of stacks that can load items as needed. If you hire professional swift developers, then remind them about SwiftUI integration.

(4) Picture in Picture: Apple introduced a Picture in Picture mode with the iPad in iOS 13. Understandably, it isn’t anything new. However, it wasn’t available on iPhones until the iOS 14 came out. Users can watch videos and take Facetime calls at the same time while doing other things on their phone. Additionally, users can customize the size and position of the Picture in Picture system. It applies to almost any app or while on the Home Screen. Of course, if you hire professional swift developers, then they have to implement support for the feature as it doesn’t apply to third-party apps. Nevertheless, it always works on the ones that play video content.

(5) MetricKit: This particular framework can prove to be of use to you. It adds Diagnostics, which is a new version of payload that tracks specific app failures, including disk-write exceptions or crashes. MetricKit can also analyze power and performance metrics and capture the same. By registering your app, you will receive reports containing information about the previous twenty-four hours, at most one every day. The data thus gathered will improve the performance standards of your app.

Things to consider
Providers of ios application development services are only as good as they know. Maybe they are aware of everything, but you shouldn’t remain underprepared. Go through this section thoroughly as it will provide information on how you can update the app for iOS 14 as well as newer versions once they appear.

(1) Checking compatibility: The first point of consideration while updating the app is its compatibility with iOS 14. iOS 14 works on almost every smartphone and tablet that runs on iOS 13. However, a few devices won’t be able to make the cut. For instance, the iPad Mini 4 and iPad Air 2 aren’t compatible with the new OS. As these devices hold a significant share of the global market, you need to make sure that any new features added to your app will work with iOS 13.

(2) Testing the app: Companies that provide ios application development services always test the app to check their performance. They won’t declare that their work is over until they conduct the testing. Nevertheless, you should ask them to keep an eye out for potential regression defects. Since the adoption rates of new iOS platforms are so high, it’s better to start sooner rather than later. The UI of iOS 14 will require alterations to the XCUITest suite. Testing teams should come up with maintenance auditing plans so that they can make corrections as soon as they start working with iOS 14 to ensure continuous stability.

(3) Privacy: Finally, you need to ponder over maintaining high privacy standards. Apple already stepped up its privacy protection clauses. With new privacy-related data in the App Store, users have more control and transparency regarding personal info. Your app will inevitably ask users for permission to track them across apps and websites owned by other business companies. Later in 2020, the App Store will aid users in understanding apps’ privacy practiced. You also have to enter your privacy practice details into the App Store Connect to showcase your App Store product page.

Final words
As already mentioned earlier, it’s best to start as early as possible. Furthermore, you should test your app frequently to see if anything requires an update or if you rework the app from scratch to make it work on iOS 14.

« Why You Should Hire ETL Developers To Get Quality Development?