The Best Alternatives To The Ionic Framework 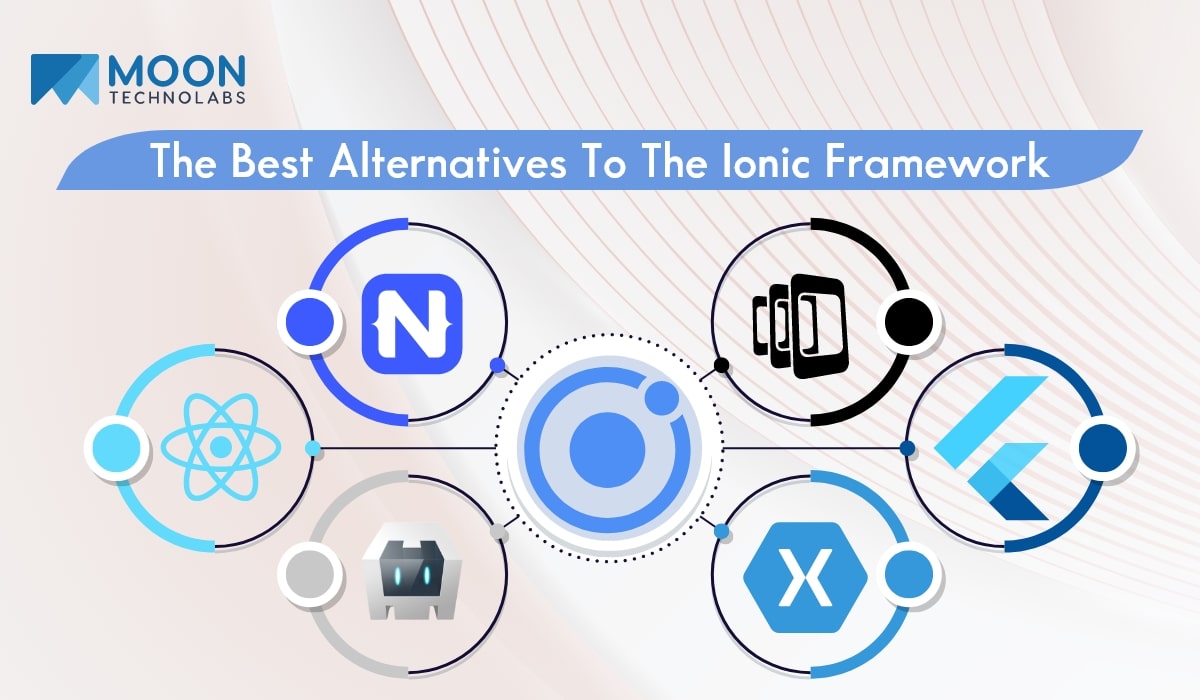 H ave you been thinking about investing in desktop app development? Then you’ll inevitably have to use the Ionic framework. However, it isn’t the only option you have at your disposal. In reality, it suffers from a few disadvantages that’ll affect your project. Instead of Ionic, you should consider leveraging one of the other frameworks you’ll read about here.

Every business company has to build a system that’ll aid brand valuation and integrity across multiple channels, apps, and devices. As the notion of globalization is constantly growing, it’s of the utmost importance for you to connect through apps to the four corners of the world. Your clients are everywhere. Naturally, you’ll need appropriate apps and software to stay connected and updated.

Creating the right kind of applications is now mission-critical for every business. Only these apps will perform on every system, device, and platform. The key to the future lies in reusability, and Ionic framework is one of the most widely used frameworks. It accelerates app development projects efficiently.

However, Ionic suffers from a few disadvantages. If you search for information on the effectiveness of this framework, you’ll find more write-ups telling you to avoid using it. Of course, it depends entirely on your project, and Ionic may not turn out to be the right choice. Nonetheless, these alternatives require your attention.

So, what is Ionic anyway? It’s an open-source, cross-platform desktop app development framework. You can also use it to create mobile applications for iOS and Android. The cross-platform ability of the framework makes it suitable for building apps for various platforms using the same codebase.

Ionic makes it easier for trained developers to create hybrid applications for smartphones. They usually combine the framework with different programming languages and web tools, such as TypeScript, Angular, JavaScript, CSS, and HTML.

Furthermore, Ionic has an inclusive library consisting of functional components that your developers can use and add to the app they build. Ionic even promises a low level of DOM manipulation without affecting the performance standards of the application. It has an exceptionally efficient CLI that saves app development time and coding efforts.

The problems with Ionic

In terms of the performance level of heavy apps, Ionic fails to deliver suitability. By using WebView for app rendering, it shows better results for common functionalities of a mobile application. However, resource-hogging apps or apps with enhanced systems won’t work seamlessly if created using Ionic.

The reason behind this problem is that the framework renders all graphic elements through a browser. It takes multiple steps to show the image on the device’s screen. The more functionality you put in between, the more time it’ll take to load.

Whenever your developers create an app with Ionic Framework, you’ll have to use plugins to gain access to native functionality. Thanks to all the readymade plugins available on the internet, you can find packages to implement the functionality you want with relative ease. Then again, you won’t find an appropriate plugin every time.

If your app has a highly specific feature, or if it has to gain access to an exclusive piece of hardware, you’ll have to develop a plugin for it. Ionic is incapable of implementing native plugins without converting them into JavaScript. While you can go all-out with the web, you can’t use even the least bit of native code. It’s entirely impossible.

Developers can use a few techniques to add changes to the code. In the field of software engineering, hot reloading isn’t just a necessity but a usual standard. Hot reloading lets you change things in the app without reloading it from scratch. You can refresh the app and continue to work on it and implement changes in live mode.

Ionic doesn’t have hot loading. That’s why the developers of today need time to get used to it. Instead of hot reloading, it has live reloading. As a result, whenever they apply one or more changes, live reloading will refresh the entire app to make the changes active.

You shouldn’t think that this disadvantage affects Ionic. It’s a pitfall that’ll affect you if you choose to work with it. Whenever you build hybrid solutions, you’ll have to deal with security-related problems; at least as long as a developer can reengineer it. With version 4, the CLI of Ionic doesn’t provide the in-built code uglification.

In short, you’ll run the risk of dealing with cyber-attacks if you use the Ionic framework to build your application.

So, what are your choices? What should you use in place of Ionic?

React Native is one of the appropriate substitute for Ionic. It’s an open-source framework for app development, and it comes from the world-renowned house of Facebook. By using React Native, experienced developers can build apps for Windows, Android, iOS, Mac, and even web applications.

From the first day, React Native has been an excellent option for large and small businesses alike. It’s suitable for creating performance-based iOS and Android applications through already-written codes.

Also Read : These Are The Top 7 Alternatives To React Native

Flutter is the next-best choice – an exceptional product from Google. It’s a practical choice for developing applications for the web and mobile devices. This open-source SDK is a combination of a massive collection of widgets developers need to create striking user interfaces.

It’s worth mentioning here that this framework doesn’t use OEM widgets. Instead, it prefers readymade variants with a native touch for Android and iOS applications. Developers will even have the option to build exclusive widgets of their own.

At the moment, Flutter is the only framework that can provide reactive views without resorting to a JavaScript bridge.

NativeScript also makes it easy for them to access the APIs of Android and iOS from TypeScript, Angular, and JavaScript.

Xamarin should’ve been above Native Script. Nevertheless, it owns a spot on this list, at least. Xamarin is a suitable alternative to Ionic and it works through a managed environment. Your developers can use it to create apps for Windows, Android, and iOS platforms.

It’s an open-source app development tool that makes the tasks of developers easy when working with pre-used codes across multiple platforms. One significant benefit of Xamarin is that it features code structure reusability. As a result, app developers can use one language to write app business logic for various platforms without any performance hindrances.

Another advantage of Xamarin is that a developer can write apps on PC and Mac. After that, they can compile the same into native IPA and APK files.

Cordova is a framework from the house of Apache. Developers use it to build native apps using CSS, JavaScript, and HTML5. Experts describe Cordova as a container used in running mobile and web apps written in HTML, JS, and CSS.

By using this framework, developers will ensure that an app will use device functionalities like the camera, accelerometer, GPS, contacts, etc. In technical terms, the UI of an app created using Cordova is a WebView that works in a native container and occupies the entire screen of a device.

It suggests that the web pages will remain the same internally. On the other hand, the native containers will change depending on the scenario.

PhoneGap is a product from Adobe Systems, and it’s suitable for developing open-source apps for mobile devices. By using it, developers can stick to a systematic process to create apps from scratch. It leverages JavaScript, CSS, and HTML for app development.

PhoneGap provides a common codebase to make the work of the developers a bit easier. Coding becomes relatively simpler with Phone Gap too. Developers can open, modify, and reapply an app’s code across various platforms.

Ionic is an extremely powerful open-source cross-platform SDK that your developers can use to build platform-independent applications for the web and mobile devices. The apps created using Ionic will run on WebView with JavaScript while interacting with various native features using the plugins of Cordova.

While Ionic is good enough, it isn’t suitable for specific projects. Depending on the requirements of the app you want to create, you may notice that this framework lags behind when compared to the others explained above.

Besides, Ionic has a massive list of imperfections. If you’ve been going through this write-up from the beginning, you already know about them. You won’t have to look far if you require app development services, either. Moon Technolabs is an agency that excels in using all the frameworks explained above for building applications for different platforms.

What do you need to know about the Ionic framework
Ionic is an open-source, cross-platform app development framework. With this SDK, app developers can create various applications for multiple platforms, including Windows, Android, and iOS.
What are the benefits of using Ionic?
The most recognized advantages of Ionic include its cross-platform approach, open-source nature, and frontend agnostic behavior.
Which alternatives of Ionic are the best?
The best replacements for Ionic include React Native, Cordova, Flutter, Xamarin, Native Script, and Phone Gap.

What Are The Best Alternatives Of Angular? »