Angular: A Most Popular Platform To Develop Attractive Web Design And Development 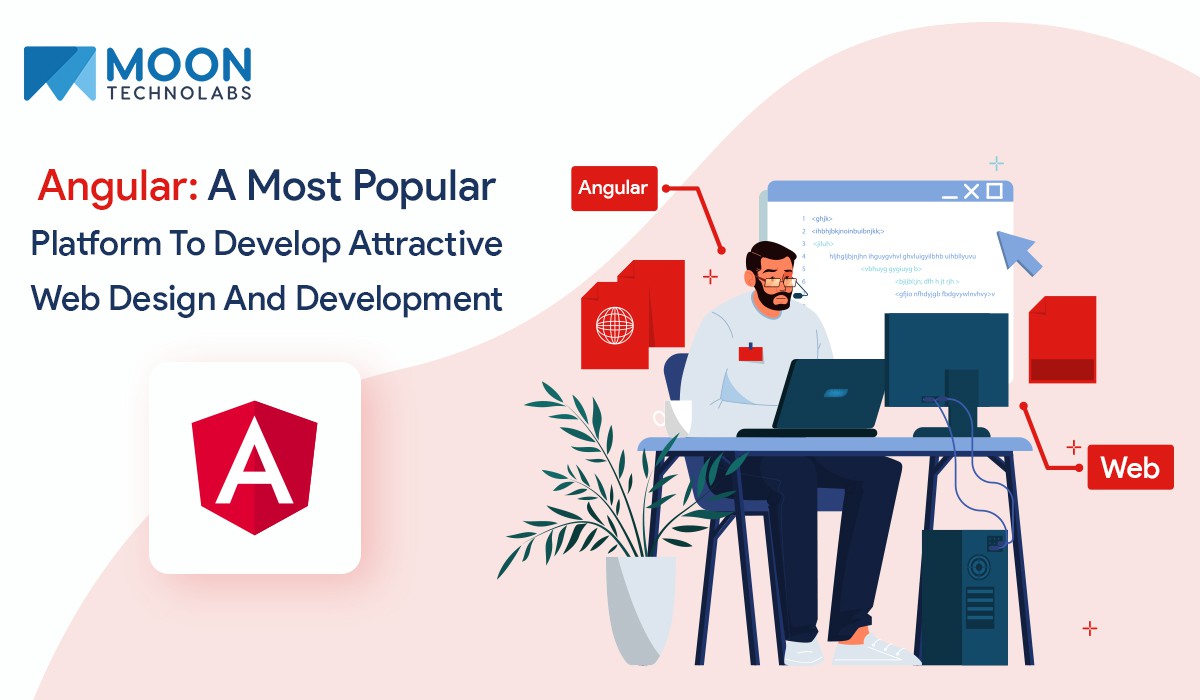 Are you wondering what frontend framework you should select for your web development project? If you ask the experts, they will surely suggest AngularJS. It utilizes MVC design and encourages the enhancement of intuitive and powerful web applications. If you continue reading, you’ll find several compelling reasons in this write-up as to why Angular deserves your attention.

Angular is an incredibly famous instrument for software development tasks today. It appeared in 2010, and since then, it became one of the most popular names among frontend JavaScript frameworks. According to researchers, the framework of Angular is the most used web framework right after jQuery. So, what’s the big deal? Why do web developers love Angular? This write-up will elucidate the reasons behind the popularity of Angular and why you should use it for your web development project.

Selecting the perfect tech stack for web development requires you to customize one or pick a commonly used stack. Angular has been among the most preferred development stacks due to the ease of development it brings.

Here’s a detailed list containing the top features of Angular and how it will benefit your web development project’s processes and performance standards:

(1) The structure: Angular boasts of having a modular structure with which it organizes the code of the application into various modules. This feature helps to keep all pipes, components, services, and directives organized into individual modules as and when developers build them. That’s why when you hire skilled Angular developers; they segregate the functionality of the application into several exclusive features and reusable code chunks. It makes things incredibly easy for them to divide the work among the developers. Furthermore, the modular structure facilitates lazy loading. With it, the browser loads various features of the application in the background, which allows users to notice and use them whenever they reach the viewpoint.

(2) Angular CLI: The surprisingly efficient CLI or Command Line Interface of Angular gives it a superb advantage. When you hire skilled Angular developers, they can automate various processes, such as app configuration and initialization with just a few simple and quick commands. This automation feature simplifies the overall development process and improves the quality of the code. By using Angular CLI, developers can build new projects and add or remove specific functionalities simply by running a few simple commands. Apart from that, it lets them run unit tests as end-to-end tests for the app quickly.

Developers can compress the elements with the same functionalities into perfectly defined components. As these components remain independent, developers can reuse the same components for every section of the UI that will work in the same way. Furthermore, the components of Angular remain loosely coupled. As a result, developers can decouple the ones you don’t want with every other component. It makes app maintenance easier and less time-consuming. Finally, the independence of all components lets developers test even the smallest sections of the application while keeping things organized.

(5) The Dependency Injection: This term refers to a specific design pattern in which one object delivers dependency to another. When the providers of Angular development services use this framework for web development, it runs every dependency parallel to each component so that the classes can derive dependency from external sources instead of acquiring them from within. This system creates a dependency tree injector that the developers can change without worrying about reconfiguring the components. It’s nothing less than a boon, especially when building enterprise applications. The dependency injection’s hierarchical structure further defines certain connections existing between every element and organizes them into unique classes. In doing so, it builds a clear relationship defining how the changes in one element affect the functionality of the others.

Angular has many other features worth describing, but it isn’t possible to include everything here. Rest assured, opting for Angular development services is the best possible decision you can make. Due to the component-based architecture of this framework, it’s the best choice for developing enterprise-scale applications. Also, the dependency injection gives it an edge, particularly when used in creating dynamic, single-page applications. However, Angular isn’t without limitations. For instance, using this framework for lightweight or static applications won’t bear fruit. Instead, it will simply make things difficult in terms of technicality. Therefore, if you’re planning to build an enterprise-level application for your business, you should go for Angular without hesitation.

How Much Will It Cost You To Hire Laravel Developers From India? »