Which Version Of Laravel Can Facilitate Faster Development? 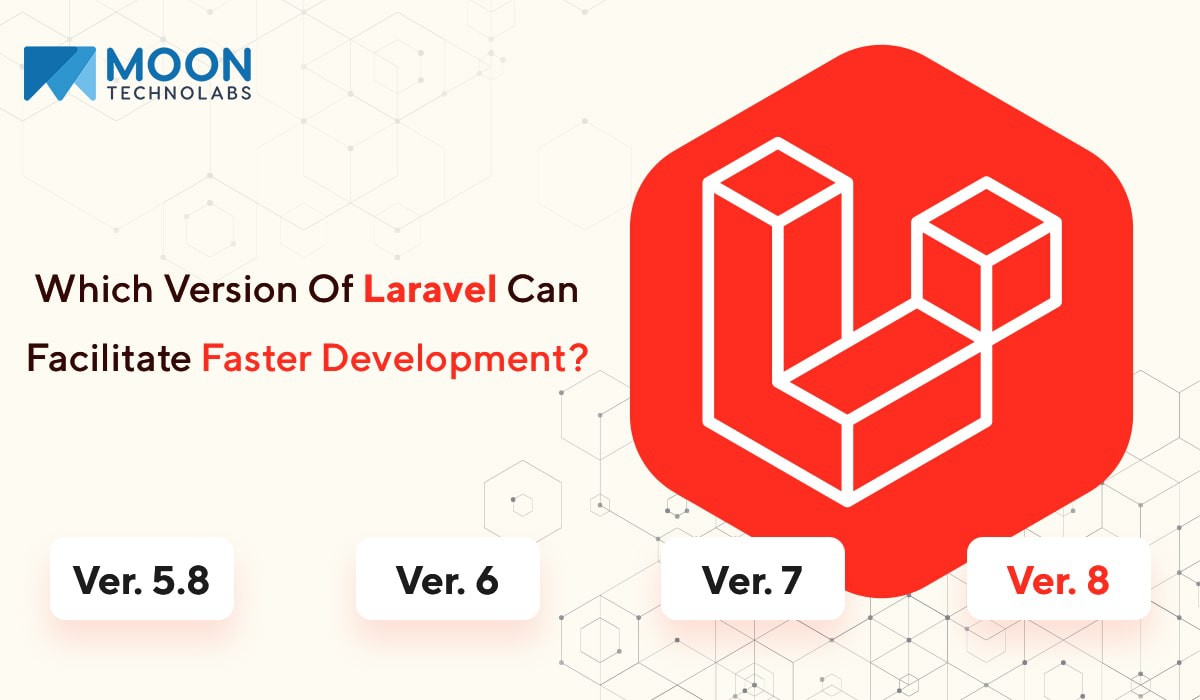 Laravel boasts of having a unique ecosystem of tools that can increase the overall speed of development, as well as the effectiveness of the apps created. The creators of Laravel designed its architecture in such a way that it became exceptionally effective for business logic and data presentation. Here you’ll learn how those tools can facilitate faster development.

Laravel happens to be one of the simplest PHP frameworks. Yet, it managed to become the most robust model-view-controller or MVC framework for the development of PHP-based web applications. Today, Laravel is one of the most favoured and cost-effective frameworks because of the functionalities it brings to the table, apart from the ease of optimization of the development process. The environment of Laravel ensures faster development cycles. As a result, it can deliver business value quicker than any other PHP framework you can think of.

If you hire a top rated laravel application development agency and ask the specialists working there about this framework, they’ll say that its architecture makes it perfect for MVC web applications. They also believe that it’s the most powerful framework in terms of data presentation and business logic. Even the development team in charge of building your app will benefit from the vast inbuilt functionalities of Laravel, as well as its extensive document and optimization facilities.

The source of power

So, what’s the source of Laravel’s immeasurable power? The developers’ tools of Laravel wouldn’t have been as popular as they are now without the extensive community support they get. Once you hire a laravel application development agency, you should ask them about the kind of help they receive from the community. They’ll say they get just about everything from learning materials, such as Laracasts, to hundreds of tools that make the process of development faster and more efficient.

Developers will have the freedom to pick from a massive variety of open-source and commercial libraries and tools. The following tools are part of the Laravel ecosystem. According to Taylor Otwell, the individual who created this framework, they can be a good place to start from.

The first tool worth mentioning goes by the name of “Forge.” It can automate the configuration and development of web applications using PHP servers. This statement should be clear enough to help you understand why everyone praises Laravel’s development speed. The creators of the framework developed it to streamline server management by offering an easy-to-use control panel that can help developers configure as many domains and sub-domains as they want to. They can also build several websites on one server or handle SSL certificates. This feature gives the developers enough space to prioritize business logic and deliver the users’ functionalities instead of spending time and money on managing services. There’s a monthly subscription price against which a developer will get the opportunity to use this particular tool. The price also dictates the number of servers that will be available for managing.

2. No downtime deployment with Laravel Envoyer

If you’re going to hire laravel developers, remember to keep your eyes open for specialists with experience in using “Envoyer,” the next Laravel ecosystem tool you’ll learn about. Why should you root for it? Well, this particular tool enables app deployment with zero downtime. It simply wants to offer a functional application to the end-users. At the same time, it performs PHP deployments. It’s a tool that can support an unlimited number of customizable deployments to several servers together with app health inspections. As the owner of a business, you’re perfectly aware of the losses you’ll incur if you have to put up with long downtimes. It can also affect the user experience. This tool will make it certain that a user never ends up on the maintenance page when you release an application. It will also stop all fatal errors in their paths when installing Composer updates. When it comes to getting the best server performance in the environment of Laravel, it’s better to use both Envoyer and Forge. Developers can build and manage PHP servers in Forge and release the code using Envoyer without any downtime.

“Horizon” is a queue manager for the projects created in the environment of Laravel. When it’s configuring and working with the application, the process should be extremely simple. It should also provide control over the Redis queues. With this particular tool of the Laravel ecosystem, the developers can configure and monitor the way they’re processing the queues and accessing the relevant metrics. In reality, this tool makes the task as easy as it can be. If you’re a purist in terms of the user experience, then you should definitely hire laravel developers. After all, by using this framework, they’ll gain access to the exquisite user interface of this tool. Furthermore, you can rest easy at night knowing that this product is entirely free to use. It’s an open-source project built by the creators of the Laravel framework for the development community.

Here’s another tool from the Laravel ecosystem called “Lumen.” It’s a micro-framework that allows the providers of laravel web application development services to create micro-services in the environment of Laravel. In simple terms, it’s an entirely different version of the original framework that’s faster and lighter. The foundation of the two frameworks is the same, as well as the components.

Lumen, however, features the convenience and power of the parent framework, but with an augmented response time and increases the performance and speed of the components. There’s a catch to it, though. What it makes up for is performance and speed, which it sacrifices in terms of configuration features. For instance, it won’t be compatible with any of the additional libraries of Laravel, such as Scout or Cashier. Nevertheless, the best developers always choose the lighter and faster version of the framework whenever they need to work on smaller components that will support the core project.

One more tool worth mentioning is “Nova,” an administration panel crafted specifically for Laravel projects. It’s surprisingly customizable and offers intelligent and unique configuration options. If you want something different from the ordinary, this tool should be your choice. Each model in every Laravel project has a corresponding resource. This resource dictates the actions, fields, cards, and filters. The configuration receives power from the simplistic classes of PHP so that the tool doesn’t end up storing the configuration settings in the database. This tool has three standard inbuilt metrics, including trend, value, and partition. The robustness of Nova is unparalleled, especially when it comes to technical features. It’s also exceptionally user-friendly. It can make resource management astonishingly simple. Just remember that this tool isn’t free.

6. Use Laravel Spark for SaaS projects

This Laravel package includes “Spark,” a tool designed for building SaaS applications. Its primary objective is to simplify the billing system scaffolding. It handles user management and billing by offering specific functionalities, such as password resetting, two-factor authentication, subscription billing, and invoicing. In terms of the development process, the providers of laravel web application development services can spend most of their time working on the exclusive functionalities of an application while saving time on the more tedious and repetitive elements of SaaS applications. Just like the last one, Laravel Spark isn’t free. You have to pay per license, and the price will increase significantly if you opt for the unlimited plan. The license will serve its purpose only after your development team deploys the site on a server.

The last tool is called “Shift,” an automated upgrade service for projects based on Laravel. This tool makes the task of upgrading outdated Laravel apps easier. The developers simply need to log in to their Bitbucket or GitHub account, purchase the upgrade package, and include the account as a collaborator to your repo. You’ll hear from Shift once again when a new back with the update gets pushed to your repo with a pull request that you must review. As soon as you feel certain about the PR, you can merge it and finish your task.

As you can see, it isn’t much about the version of Laravel used. Everything boils down to the choice of the tools of the development team. It’s also worth mentioning that the developers’ tools described above are just the basic ones. The Laravel ecosystem has many more. The popularity of the framework has been constantly rising, which results in the appearance of more and more tools. If you can find and work with a team that remains updated with the new tools and packages, the development process of your project will be significantly faster.

« Protect Your Business App Idea By Patenting It First