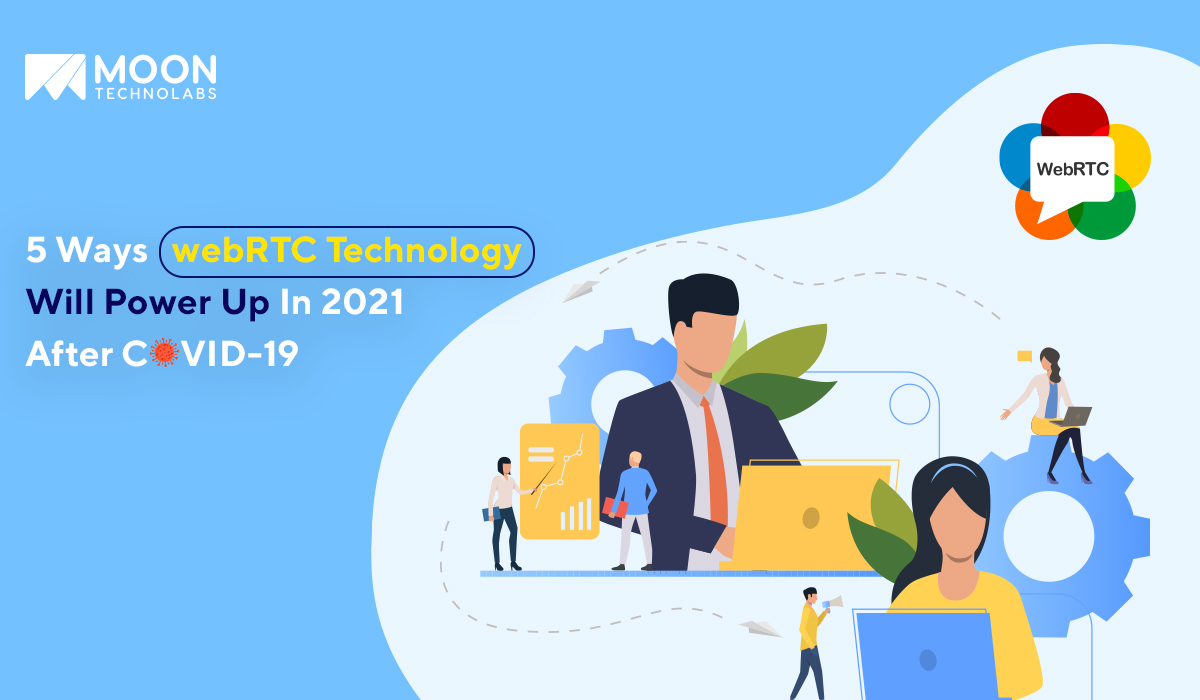 At the moment, WebRTC is an incredibly popular topic among technology enthusiasts and business organizations. Even a couple of years ago, people were wondering whether WebRTC is worthwhile enough for business purposes or not. The pandemic that hit the world this year proved how beneficial WebRTC could be! In fact, it will become much more crucial to businesses in 2021.

It’s the world of personal computing and digitization. However, it’s not unusual if you run into a specific form of technology that has been around for some time but didn’t receive recognition until recently. People have been using LCD screens on their computer monitors and TV sets for over three decades, but the technology appeared during the 1960s. When you see an iPod, you feel nostalgic knowing how that small device changed the world when it first arrived. Then again, most people aren’t aware of the fact that the underlying tech that powered this device was already there in the mid-1970s.

In that regard, Web Real-Time Communication or WebRTC is one of those revolutionary technologies that seem fresh to you. It arrived back in 2008 with HTML5. It has the power to control the future of both business companies and personal communication systems. After the World Health Organization declared the outbreak of the SARS-CoV-2 virus as a pandemic, this technology gained the recognition that it deserved. Those who used it didn’t even know how it worked. Nevertheless, they used it to stay home but remain in touch with their colleagues and superiors. After all, the world stood in its tracks for a few months, but due to WebRTC, businesses started rolling again. It even supported youngsters by helping them join virtual classrooms.

Experts have reason to believe that every WebRTC technology development company will receive more projects in 2021 than it did this year. What are those reasons?

(1) Full-fledged integration: There was a time when WebRTC wasn’t anything more than a pet project of Google with a small base of users. During 2020, it probably became the most integrated system in every existing platform and technology. When developers integrate WebRTC into existing PBX platforms, they gain access to already-existing networks of the user agents to power their WebRTC apps. As a result, these people reap the advantages of the features of WebRTC on an incredibly scalable level. It means that a user can make and receive video calls without leaving their internet browsers.

(2) The cost: The pandemic and everything else it brought forced the whole world to rethink the importance of money. Today, every business owner will think twice before making a move that incorporates expenses. However, hiring a WebRTC technology development company is something that no business owner should avoid. With its open-source standard, WebRTC remains to be one of those technologies that don’t require an expensive licensing fee. The mechanisms developed by the builders are free to use. The open protocol of WebRTC lets developers create platforms that won’t force the customer to put up with additional costs. With every passing day, this technology is becoming much more tolerant of the video codecs used for proprietary purposes. It further adds to the versatility of the options available for development. With this tech, developers can utilize free to use tech that ultimately allows the development agency to charge reduced prices for their products and services.

(3) The competence: The level of efficiency offered by WebRTC is unparalleled, and developers know it. As the consumer, you only need to try it once to gauge its competence. Developers had a hard time capturing and passing data in real-time from the webcam and microphone of a computer to another browser. After the arrival of HTML5 and WebRTC, things underwent significant augmentations. The “getUserMedia()” command lets browsers retain and transmit complicated pieces of data to their peers. The power of one JavaScript command reduced the complicatedness of capturing real-time data and condensed everything within one line.

Naturally, developers don’t need to worry about crafting media engines elaborately to run their applications. WebRTC will do the heavy lifting while developers focus on the unique aspects of the apps. For consumers, this technology doesn’t require you to download it or use plugins. It will operate normally on Opera, Chrome, and Firefox.

(4) The quality: Providers of WebRTC application development solutions use VP8 as the open-source video codec. It doesn’t have any frame or rate limitations. The measurements in terms of height and width pop out as 14 bits each that allow users to achieve a resolution of 16384 by 16384 pixels. The quality standards of VP8 match H.264, and quite favourably too. You will realize it when you consider the fact that the latter requires you to pay a significantly high licensing fee.

(5) High adoption rate: As already mentioned earlier, business companies from all over the world rediscovered WebRTC. While there’s nothing to thank the pandemic for, it did shed light on a system that has the power to keep the world of commerce afloat during situations like these. Of course, this adoption rate of WebRTC application development solutions will increase in 2021, but it wasn’t as low in the past as you think. Back in 2014, search engines, including Chrome, Opera, and Firefox, adopted it. Even Microsoft chose to rely on it soon after. Apple is the only company that doesn’t have anything to do with WebRTC as of yet.

The points elucidated above prove that WebRTC will prove to be indispensable in 2021. Not every business company will allow its employees to work from the office. Even if they do, they will adhere to rotational measures to ensure that no one becomes a victim of COVID-19. During times like these, WebRTC tech can prove to be the answer to all problems.