What Happens If Angular And Vue Lock Horns? 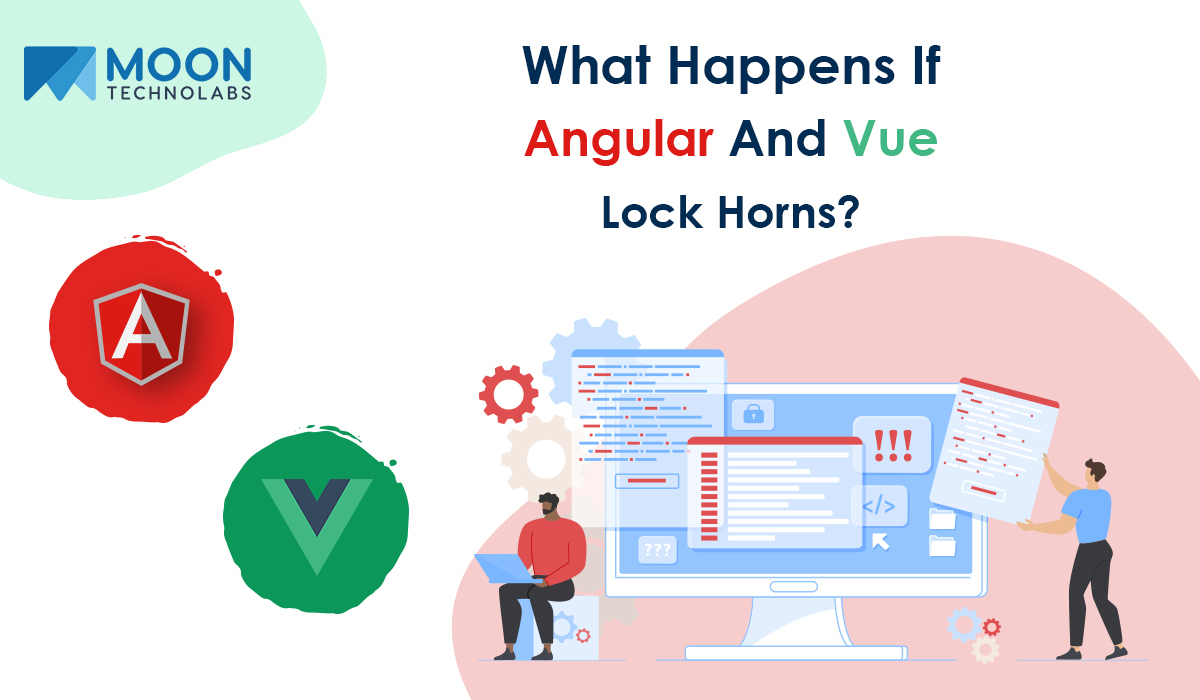 Specific front-end frameworks passed through dramatic evolutionary phases over the past decade. Some of those frameworks emerged as game-changers. Every CTO wonders which framework he/she should use in his/her next project. If you’re pondering over the same thing, then this topic is a must-read for you.

Google introduced Angular as a mature and advanced framework of JavaScript. It’s one of the most useful and practical platforms that you’ll find. However, you’ll need to invest a significant amount of time to create an application.

The main reason why Vue app development companies use Vue is that it’s perfect for less demanding apps. It’s exceptionally useful when it comes to releasing a prototype as early as possible.

Even after the incredible reputation of Angular, Google utilized Vue in the development of a library of Google Charts, a reactive wrapper.

A massive number of companies have been using Vue for some time. As a result, it became one of the best frontend tools of today.

At the moment, a lot of people wish to find out what would happen if Angular and Vue were to lock horns in a battle. If you go through this write-up, then you’ll learn everything.

Google created Angular and released it in 2010. This JavaScript framework is primarily of the TypeScript variety, and its users declare it as the most preferred programming language.

Vue.js, on the other hand, is a framework created by an ex-employee of Google in 2014. Despite its massive growth rate, it doesn’t have the support of an organization as profoundly popular as Google.

Where they stand now

Software development trends prove that Angular has been the second-most popular platform after React. However, it couldn’t stop Vue.js from growing. Why else would you be searching for Vue app development experts now?

Then again, siding with Vue may not be the right thing to do, especially for specific projects. If your application is going to be bulky, then you should resort to Angular.

Despite everything else, both platforms earned fame, but there are differences between the numbers. If 30% of developers choose Angular, then 15% will select Vue.

(1) Binding data: Angular makes use of two-way binding among scopes. It even has support for asynchronous services that prove helpful for developers while attempting to include elements created by third parties. Vue works with a one-way flow of data among the elements. Apart from facilitating effortless data flow, it eases the task of developing non-trivial applications. In terms of data binding, Vue and Angular are the same.

(2) Declaring variable syntax: Since Vue.js works on the same standard of TypeScript, you can use the variable types that you do when working on Angular. When it comes to creating objects, singular variables, arrays, and arrays of objects, the method is the same one that you use in Angular.

(3) Integration: It’s simple enough for Angular integration with third-party elements and other libraries of JavaScript. When working on the creation of Vue.js native app solutions, Vue makes things easy for you to integrate many of the preferred libraries for frontend development, even if you have already been working on it for some time.

(4) The level of complicatedness: As you can probably imagine, working with Angular is much more complicated than working with Vue. After all, the former is good for big-sized applications with loads of functions, while the latter is for the simpler ones. Another problem with Angular is that it takes too long to finish a project on it. The documentation is equally complex. You have to spend some time studying the documents to contemplate the most critical concepts. In short, novices will experience challenges in working with Angular. Vue is comparatively easier to work with, both in terms of API and design. One can use it effectively if he/she knows CSS, HTML, and JavaScript to create a one-page app in one day.

(5) The flexibility factor: With Angular, you’ll get a lot of support on a massive range of systems without worrying about restrictions in the structure of the project. Developers are in love with it for this flexibility. Even then, opinions tend to vary. You have to stick to the overall structure and adhere to predetermined design patterns. Vue doesn’t have such an enhanced level of flexibility.

(6) The standard of performance: Angular has been around for a decade, and it never disappointed developers regarding performance. Regardless of the number of watches, its pace always surprises everyone. Of course, if the scale of the project undergoes alterations, watchers have to go through the project from scratch. However, it doesn’t affect the performance of Angular on several benchmarks. Vue has the same capability that makes it easy to create Vue.js native app solutions.

(7) In terms of TypeScript: The TypeScript of Angular steepens the learning curve of Angular. If you know how to handle JavaScript, then you shouldn’t have a problem. Beginners, however, can’t say the same thing. They must learn and understand TypeScript to use Angular. After all, its knowledge resources, as well as documentation, are all on TypeScript. The speciality of TypeScript lies in the fact that it offers static-type checking for applications that you already scaled. It means that you’ll enjoy type-safety during the entire development process. You will save time and reduce your chances of encountering errors on a runtime basis. Vue comes with TypeScript support too, but nobody uses it extensively. There’s always a possibility that it will become a platform that uses TypeScript inherently in the future.

In the end, there’s nothing more than the same thing to say. Angular is what you need for large-scale and complex projects, and you’ll require Vue if the project is small.