React Native vs. Ionic – Which One Is Better And Why? 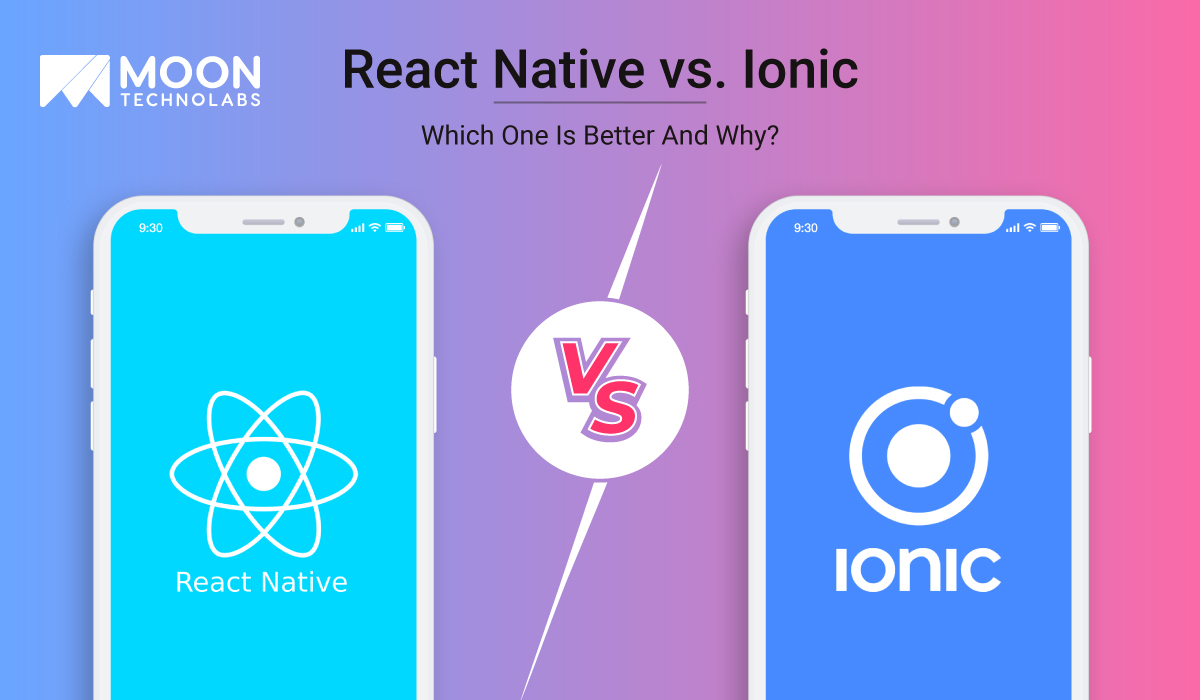 Are you trying to gather information about cross-platform development frameworks for your project? Your exploits will inevitably lead you to React Native and Ionic. At the moment, both frameworks stand out from all others. However, one of them is better than the other in some ways. So, which one should be your choice?

If you’re planning to develop a mobile app, you should take a look at this write-up. Choosing to build an app is an excellent decision, considering the fact that almost everyone uses smartphones these days. There isn’t anything better than an app for a business to engage its uses and enhance their lives.

Studies conducted by the experts of Gartner prove that about 70% of all interactions on business software solutions will take place via mobile devices within this year. Then again, the ecosystem of mobile devices is a complicated one. To get your app published on both Apple App Store and Google Play Store, you may require two native development teams.

As you can probably guess, building applications for two different platforms separately will ultimately contribute to your expenses. It’s one of the main reasons why app development maestros created cross-platform development frameworks. Among them, React Native and Ionic stand out from the rest. This topic will try to establish differences between the two.

Which one of the two is more popular? It’s the first question that comes to the minds of business owners attempting to get an app created for their entrepreneurial ventures.

Both frameworks receive support from a massive community spread throughout the world. Both frameworks have also won the trust and respect of some of the largest enterprises. These business firms utilized their React Native and Ionic apps to accumulate massive volumes of customer data. Also, end-users have been using apps designed on these platforms for years.

Here’s a graphical representation of the trends concerning Ionic and React Native usage.

As you can see from this graph, people resorted to Ionic app development instead of hiring a react native app development company back in 2017. It happened mainly because of the age of Ionic being more than React Native. In 2017, Ionic was more mature and facilitated stable, bug-free mobile app development.

Then, in 2019, Facebook worked hard on making React Native better than it was by introducing a more stable library. Facebook even kept on updating it regularly while incorporating it into its exclusive digital products and displaying more success stories.

Here are some results of popularity surveys conducted by market researchers in 2020.

Just because React Native won the round of popularity doesn’t mean you should go for react native app development services. There are a few other factors worth paying attention to. The next point of comparison is the functionality of each framework.

The creators of React Native wrote the framework using JavaScript. The code of JavaScript communicates with Android and iOS with the aid of a mobile JS API. This API transfers the necessary functions and data calls to the native platform API as the two remain connected by a bridge.

React Native depends on the Dynamic Runtime approach, but Ionic is all about Cordova that piggybacks on a WebView component or a browser view devoid of chrome. The component of WebView leverages an HTML layout engine for rendering HTML/CSS user interfaces.

Both frameworks have a core SDK comprising JavaScript, but there are differences. The fundamental flex layout of React Native lets developers obtain the necessary components with ease. There is one limitation, though – a developer has to get familiarized with CSS. They may even need to learn Flexbox, Redux with React, Axios to call APIs, ES6, and more.

Conversely, Ionic is easy to install via npm commands through Cordova. The ngcordova component provides developers with a powerful collection of all services and extensions of AngularJS. Furthermore, Ionic even has an Ionic Academy, which is an online education establishment. It offers step-by-step courses for developers of various levels to ease learning.

Now, it’s time for you to look at the frameworks from the perspective of the tech stack. It’ll help you to determine whether react native app development services are better than Ionic or vice versa.

You already know that React Native establishes communication between native and JavaScript components by bridging the gaps between the two correspondences.

The most attractive feature of React Native is that a developer won’t be able to do anything using the JavaScript aspect. They can offload it to the native section of an app only. In other words, developers will create some parts of the app in React Native and the rest using full-fledged native components.

As the name of this framework has the word “native,” you may be wondering whether it can facilitate cross-platform development at all. Well, it can, but it isn’t a hybrid platform per se. Developers can’t use it to build one codebase that’ll run on both mobile operating systems.

The stack structure of Ionic has three different layers.

Ionic as the user interface framework

One of the primary functions of this framework is to offer UI components that don’t exist in the web app development ecosystem. It also has a CLI tool to make building, creating, and launching Ionic apps easier.

Cordova as the hybrid app framework

Cordova delivers a web interface to work between a device’s WebView API and native API. The main feature of Cordova is to cover the gap between the two tech stacks of Native API and WebView HTML.

Angular as the web app framework

Ionic depends on AngularJS to build its customized UI components. Furthermore, Angular also simplifies things for Ionic to leverage one of the necessary framework powers, such as MVVM, MVC, or MVP.

If you have to evaluate cross-platform development frameworks like Ionic and React Native, you must consider the size of the platforms. For react native app development, companies like Moon Technolabs have to spare about 8.5 MB of space for the framework.

On the other hand, Ionic needs only 3.2 MB. Ionic is also the better platform when it comes to building smaller applications.

Even the best developers can take almost a month to build the simplest applications using Ionic. However, the same developers need about one and a half months to complete their work on an app using React Native.

If you want to publish your mobile business solution as fast as possible, you should put your faith in Ionic.

App security is one of the most crucial determinants of today. What can Ionic and React Native offer in terms of security?

When working on an iOS app on Ionic, developers can add encryption features on their devices using the secure storage plugin of Cordova. On Android, they need a screen lock or swipe system on the device for encryption purposes.

Several other factors require your attention if you hope to make an informed decision. Unfortunately, it isn’t possible to include any more information in this write-up. Nevertheless, you should stick to react native app development offered by Moon Technolabs if your project fulfills the following criteria.

Ionic should your choice if your project adheres to the following criteria.

If your app is about P2P marketplaces, video streaming, fitness, social media, or something similar, Ionic will be perfect.

Conversely, React Native would be the better choice if you hope to create a powerful solution with higher performance standards and responsiveness. Those who choose React Native don’t have to worry about budget or time-related restrictions.

Which of these two frameworks is more convenient for developers?
According to experts, Ionic is more convenient because of the conventional WebView-type cross-platform development approach.
What about maintainability?
In terms of maintainability, both Ionic and React Native come out as winners. However, with React Native, developers have to work on two codebases instead of one.
What if a business owner wants to leverage the power of IoT?
If you want to utilize the power of the Internet of Things, an app built using Ionic will serve you better as it’s easier for developers to interface Ionic apps with IoT devices compared to React Native solutions.

Flutter Vs. NativeScript – Which One Is Better And Why? »

« How To Add AR Effects To An Android App Using VrFace Library?