Flutter Has Become A Trendsetter In Mobile App Development 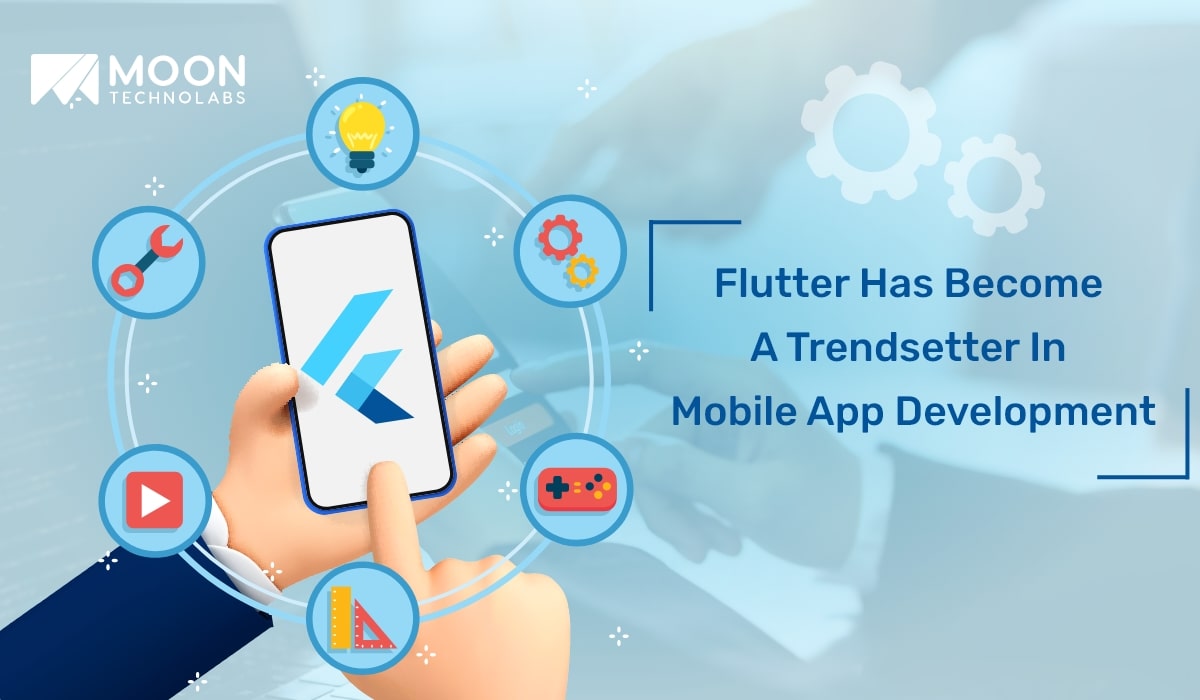 If you’re looking to build a mobile application for business purposes, you probably wouldn’t want to follow the latest trends. It’s perfectly natural as mobile app development isn’t akin to fashion or house renovation. App development demands specificity, but if you select Flutter, you’ll pick a trendy platform without worrying about unwanted results.

Whether you’re an entrepreneur about to launch your business or an already-established business owner, you’ll benefit from creating and publishing a mobile application. Today’s customers expect digitized solutions. Besides, digitization will also facilitate business process automation.

In the competitive environment of today, a technologically augmented ecosystem is constantly evolving. In reality, almost every startup, in particular, faces a high failure rate because of choosing the wrong mobile app development platform.

Now, the problem with following the latest trends is that they work well in terms of fashion, home remodeling, etc. For mobile app development, you need to be more specific. One framework, library, programming language, or tool will work better than others for your specific project.

However, Flutter is a UI toolkit from Google that has been trending for the last few years. It’s one of the few platforms you can choose. You’ll be following a trend, but it’s a trend that you won’t regret following.

So, what is Flutter? If you wish to hire dedicated flutter developers, you have to know what it’s all about first. As mentioned above, it’s a UI toolkit from the esteemed tech giant Google. App developers use it to create native applications and surprisingly engaging UIs for the web and mobile or desktop devices.

Flutter is extremely popular as a platform that increases the speed of the development process while cutting down development expenses. It also allows developers to build superb user experiences that will be aesthetically pleasing. Small businesses, entrepreneurs, as well as MNCs prefer to use Flutter.

Here are a few pieces of information that’ll prove to be persuasive enough for anyone to hire dedicated flutter developers from agencies like Moon Technolabs. 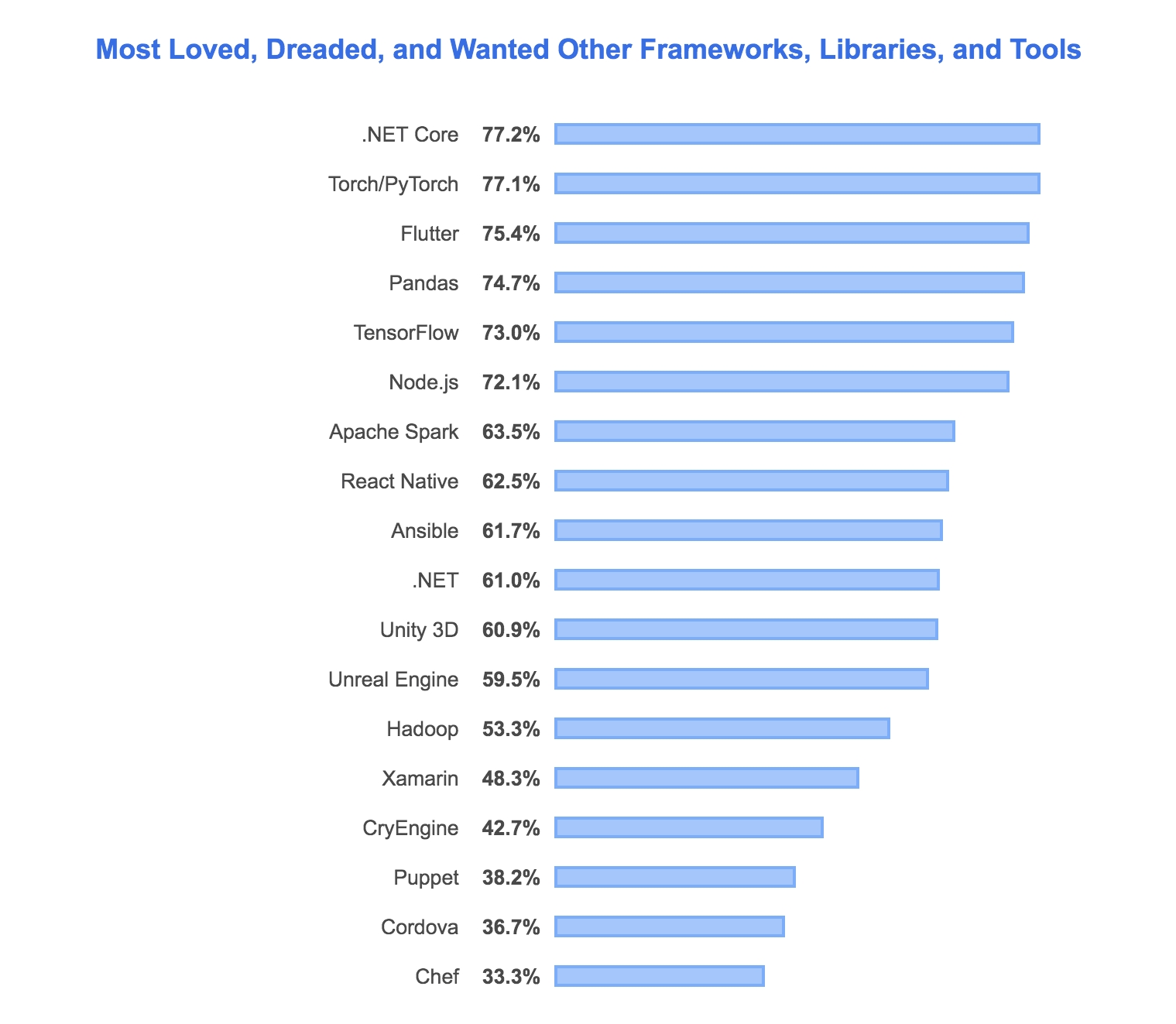 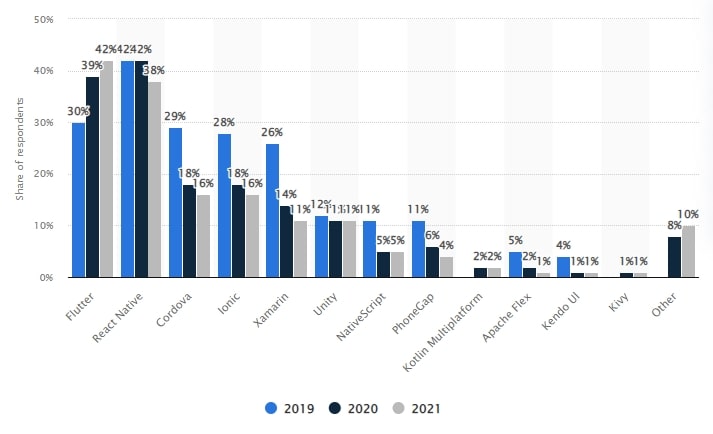 The rate at which Flutter is growing is making developers feel confident concerning its future. They think that this relatively new framework will dictate cross-platform app development for years to come.

Don’t you think that the data provided above is intriguing? If you do, then you shouldn’t hesitate to hire dedicated flutter developers for your project. However, if you need more convincing about how Flutter became such a trendy framework, you should continue reading.

So, what gave Flutter the popularity it currently enjoys?

Among all the features of Flutter, there’s one that makes it better than others. It doesn’t require a developer to write code more than once. It surpasses the conventional limitations of every cross-platform app development approach where app builders had to write several pieces of code for various platforms.

If you choose to build your enterprise-level applications using Flutter, your developers will have to write code only once. They won’t have to do it separately for different operating systems, either. An app created using Flutter will run on Android, iOS, and Windows seamlessly.

The hybrid app development approach of Flutter reduces the effort of the developers, as well as the end-users of the application.

The single codebase method of development lets developers reuse the code with various plugins, which, in turn, brings down the development time. Additionally, when it’s about testing, one quality approach inspection measure is usually enough to gauge the features, functionalities, and programs of cross-platform applications.

App development with Flutter can aid you in displaying your MVP to your investors. You won’t even have to ask your developers to build two separate apps for iOS and Android. Once the MVP is ready for showcasing, you can talk about your business model with your investors. Its presence will make your task simpler and even help you secure funds.

An MVP can save both time and resources as you won’t require your developers to build and test project prototypes. In terms of developing MVPs, Flutter stands out from the others. As it increases the speed of development, the whole task gets simplified.

Furthermore, Flutter is compatible with Firebase. This feature won’t need to build a separate backend for a simple MVP.

Another one of the features of Flutter that makes it trendy is the system called “hot restart” or “hot reloading.” This feature lets developers explore all changes in the code within a second or two.

In short, as developers write code, they can see how they’re progressing simultaneously. This increases developer productivity. It’s also a feature that’s incredible for fixing bugs as they appear.

You must remind the developers of your preferred flutter app development company to leverage the abilities of widgets. They play a crucial role in the interface of an application. Flutter-integrated mobile applications provide a massive range of widgets, including scrolling, navigation, fonts, etc.

Regardless of the screen size, these design elements are customizable. The fact that an app created using Flutter will feature a smooth UI experience is undeniable.

Flutter utilizes a specific programming language called Dart created using Google’s in-house language. It’s a one-source, general-purpose language that a developer of any level of programming knowledge can use. Even rookie developers working with a flutter app development company find it simple and easy to access than other languages.

Another specialty of Dart is that it isn’t just for building mobile applications. Experts can also use it to create apps for the web, desktops, and servers.

As you can see, Flutter isn’t popular simply because it’s a product from Google. It’s the incredible features of this framework that gave it the fame it enjoys. App development maestros from all four corners of the world say that it’s a game-changer, and it’s here to redefine the sphere of app development.

With organizations like Moon Technolabs at their disposal, business owners and entrepreneurs can invest in mobile solutions with quick turnaround times and go-to-market aspects. They can also reduce their experiences, resources, and time by opting for developing applications on Flutter.

It’s the perfect choice for your business. The only thing you need now is an app development agency. You should start searching for one that can build the solution you seek. However, you mustn’t hire a service provider without gathering enough information about the agency.

Are there any noteworthy apps created using Flutter?
Of course, several noteworthy brands resorted to Flutter to build their enterprise solutions. These include Alibaba, Google Ads, Reflectly, Watermaniac, Hamilton Musical, Hookle, SpaceX Go!, Cryptograph, PostMuse, and more.
What makes Flutter so popular?
Several reasons contribute to the popularity of Flutter. However, the two most important ones include the “write-once” approach to development and hot reloading.
Where should you look for Flutter developers?
Moon Technolabs is a reliable place to look for Flutter developers. You can, however, choose an app development agency you prefer.

An Overview Of The Architecture Of Electron.js »