Comparisons: React Native vs. Flutter vs. Ionic vs. Xamarin vs. NativeScript 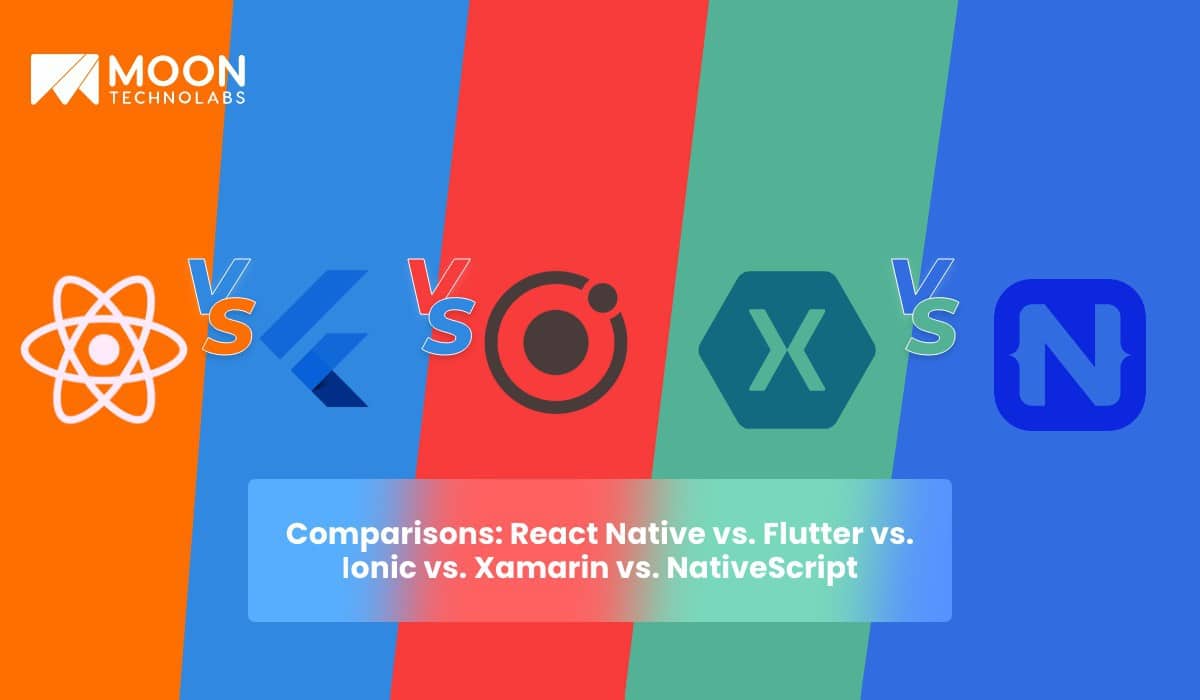 When it comes to mobile app development, one can choose between fully native and cross-platform applications. Both approaches have their own unique advantages. This topic will provide you with a comparison of some of the most popular app development frameworks – 5, to be exact. These include React Native, Flutter, Xamarin, NativeScript, and Ionic.

The sphere of mobile app development gives you the chance to choose between fully native and cross-platform mobile applications. Native apps work only on the devices powered by the specific OS for which the app developers create them. Cross-platform applications, on the other hand, will work on multiple devices, regardless of the operating system they run on. Both approaches have their unique advantages. You can hire React Native app development company for business requirements.

As the owner of a business, one of your priorities is to make the most informed decision at all times. You’ve decided to hire react native app development company for your project, and you did it with deliberation because you’re perfectly aware of what you must do. Nevertheless, if you have enough time, you should go through this write-up. Here you’ll find a comparison between 5 of the most widely used app development frameworks. These include React Native, Flutter, Ionic, Xamarin, and NativeScript. By reading this topic, you’ll get a chance to refine your decision even further. You can always hire React Native app development company for your React Native requirements.

The differences between native and hybrid

It’s always wise to go through every piece of information you find before you choose to hire react native app development company. As already mentioned above, both native and cross-platform app development have their benefits. Naturally, you have to know the differences between them firsthand.

Native applications utilize the technology or language of the specific platform, such as Swift or Objective C for iOS and Kotlin or Java for Android. As native applications leverage the underlying platform to the fullest, they always tend to deliver the best performance combined with an incredible user experience.

Then again, building apps for several platforms in the native codebase means you need to pay for iOS and Android app versions separately. Apart from the expenses, you’ll require two different codebases and teams to work on the project.

Cross-platform or hybrid apps enter the scene to solve the problem. Developers write code in a different language than the one used in the OS and deliver the experience of native apps at runtime.

One codebase is enough for a developer to build a cross-platform application, which also happens to be the foremost benefit of this approach. Opting for cross-platform app development will allow you, as well as your development team to save time, effort, and expenses. Your developers will be able to utilize some of the most favoured coding languages without learning Objective C, Swift, Kotlin, or Java. Now, you can’t expect everything from hybrid applications. For instance, they aren’t going to be as good as native apps in terms of performance, but the ease of development far outweighs this disadvantage.

As you know now, developers create native apps with a single codebase. After that, the framework will compile the codebase to native Android or iOS. The developers will translate the development language into the original native widget for the targeted platform in terms of the UI components. The process will convert only the UI components of the code to the equivalent native UI components in the targeted platform. Finally, these platforms will offer access to all the features of the device by abstracting a layer over the device hardware. Hiring a React Native app development company for your native requirements can be done.

In this particular approach, developers will wrap the app code in a web view and display the same without the browser bar as a native application. Unlike “Compile to Native,” there won’t be any code conversion here. Instead, the app will detect the OS that powers the device and render the app in the browser. The UI code will replicate the UI appearance of the OS by using Sass, CSS, etc. Additionally, “webview” frameworks can gain access to only a few hardware features. Ionic, however, uses Cordova bridge and Capacitor packages to carve a path to the features of the native device.

Now, it’s time to take a look at all the frameworks mentioned earlier. If you continue reading, you’ll find a detailed comparison that will help you ascertain the most suitable option. There’s no point in using the word “best” here because it’s entirely subjective. “Suitable” is the more fitting term as your framework choice will depend on the requirements of your project.

The best place to get a proper look at the popularity level of all mobile app development platforms is the website of GitHub. Based on the information gathered from GitHub, React Native is exceptionally popular. After all, it managed to garner 89,500 stars. Then again, it doesn’t mean everyone loves it. The popularity of React Native doesn’t prevent people from opting for flutter app development services, either. Developing apps using React Native does have its flaws, but it’s still highly popular. A lot of people are going for flutter app development services too. The fame of Flutter recently exploded and earned more stars than React Native. Currently, it holds almost 100,000 stars. It had only 30,000 back in August 2018. Ionic occupies a spot in the middle, and the popularity of NativeScript is rising at a snail’s pace. Xamarin is trailing all the other frameworks in terms of fame. In the end, everything boils down to the specific requirements of your project, and popularity doesn’t have anything to do with it.

As you can probably guess, this metric measures the reusability of code. Developers will be using only one coding language, but they may need to write different code if you think your project requires platform-specific restyling. Any top React Native app development company with great knack for services can help you with your requirement.

With this metric, you’ll learn about the availability of pre-created UI elements. If a framework brings more components to the table, developers find it easier to use them to build beautiful UIs.

There are several other points to consider, such as mobile app performance, native device feature accessibility, and community support. If you wish to learn about them, you should get in touch with the providers of native script app development services that also have experience in working with all the other frameworks mentioned here. They can help you decide whether you should go for native script app development services or something else.