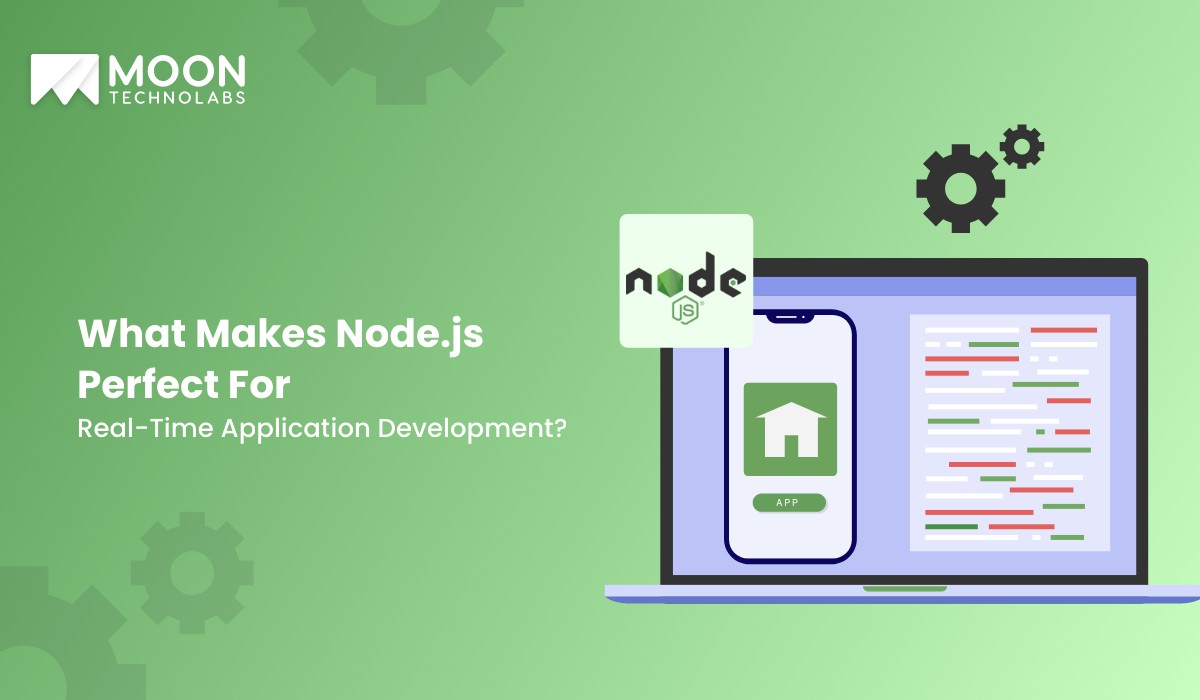 This write-up incorporates a perfect mixture of motivation and knowledge for using Node.js for real-time app development. The best minds are attempting to seek out the ultimate solution for the development of real-time applications using the right tech stack. Node.js stands out from the rest as the hero in the field of frameworks as it holds the NPM package, event-driven titles, synchronization, debugging, and client-server rendering.

In this digitized day and age, time is of the utmost importance. It’s also the most valuable commodity, despite being abstract. That’s why app developers build applications that a user can interact with in real-time. In reality, it has become a mandate for every node.js development company. It doesn’t matter whether you need a desktop app, web app, or mobile app built for your business. If you want it to work, you need at least one real-time feature incorporated into it. For example, two of the most included real-time features in apps are notifications and real-time messaging.

So, what does the term “real-time app” mean? Apps like these perform several functions within a specific timeframe, which makes the user feel as if everything is occurring instantly or in real-time. A few examples of real-time apps worth mentioning include community storage solutions, specific e-commerce transactions, chatting, instant messaging, video conferencing systems, VoIP systems, online gaming, etc.

As already described above, messaging and notifications are two of the most common use cases of real-time applications, but they do serve other purposes too.

Almost everyone out there is aware of how to use a real-time messaging app, especially those who use smartphones. Examples worth mentioning include WhatsApp, Facebook Messenger, and more. Applications designed by the best node.js development company can utilize real-time messaging systems, but this feature isn’t part of messaging applications only. You’ll find it in collaborative platforms, including on-demand taxi booking apps, food delivery apps, etc.

After the arrival and ensuing popularity of on-demand delivery applications, such as cab booking services, it became important to track the progress of the taxi’s arrival for users.

The same goes for food delivery or grocery delivery applications. Real-time progress updates appearing on an app enhance the reliability and usability of the same.

Real-time features are a must-have for IoT devices. The data secured by the sensors of an IoT gadget gets transmitted, processed, and displayed to the end-users within a few moments. Maximum inputs secured by an IoT device can transform with time, such as temperature or lightning. Understandably, these gadgets have to be capable of sending and receiving data in real-time.

The purpose of Node.js

So, what’s the purpose of Node.js in everything described above? Why should you specifically hire dedicated node.js developers? A few applications are all about speed and they require focused scalability. For these apps, Node.js can help developers with its event-driven features and non-blocking I/O.

Node.js specializes in offering two-way connections constantly to applications, including social media, discussion forums, ad servers, and software solutions used by stock exchanges. When it comes to real-time, data-intensive applications or IoT devices, experts will always choose Node.js as their preferred tech stack due to the level of scalability and swiftness it offers.

The best app development organizations stick to the best programming strategies whenever it picks up a project. Naturally, an application developed using Node.js enables both the client and the server to exchange data and communicate with ease.

The perks of Node.js: Here are the benefits that Node.js has to offer for real-time app development.

If you hire dedicated node.js developers, they will make appropriate use of the non-blocking I/O feature which in turn, shifts data transmission between client and server quickly.

A real-time application has to put up with the whims of hundreds and thousands of real-time users. Node.js development can support response based on the event-driven server in charge of assisting non-blocking functioning.

It should be clear to you now that Node.js is a real-time programming language that can assist the micro-service architecture. Developers can use the library code package one more time and share it in multiple projects. Furthermore, it supports developers in fostering enhanced productivity and saving valuable time.

As Node.js depends on JavaScript, it pulls the developed app faster, just like JS. Understandably, an application having a single-threaded model and an event loop can handle multiple requests from several clients easily.

SEO is crucial if you hope to survive and thrive in the digital world. If you don’t want your SEO to suffer, you must look for an app development agency with proficiency in developing real-time applications using Node.js. The backend rendering capability of this tech stack increases engagement and offers incredible visibility to the site.

When a tech stack possesses such functionalities and features, it will inevitably become trendy in the field of development. So, if you’re planning to get a real-time application built for your business, make sure to work with a Node.js development agency.

How To Create Google Or Facebook Based Product In Magento 2? »

« How Much Will It Cost You To Develop A Doctors’ Appointment App?