Windows 11: What’s Trending Features In It? 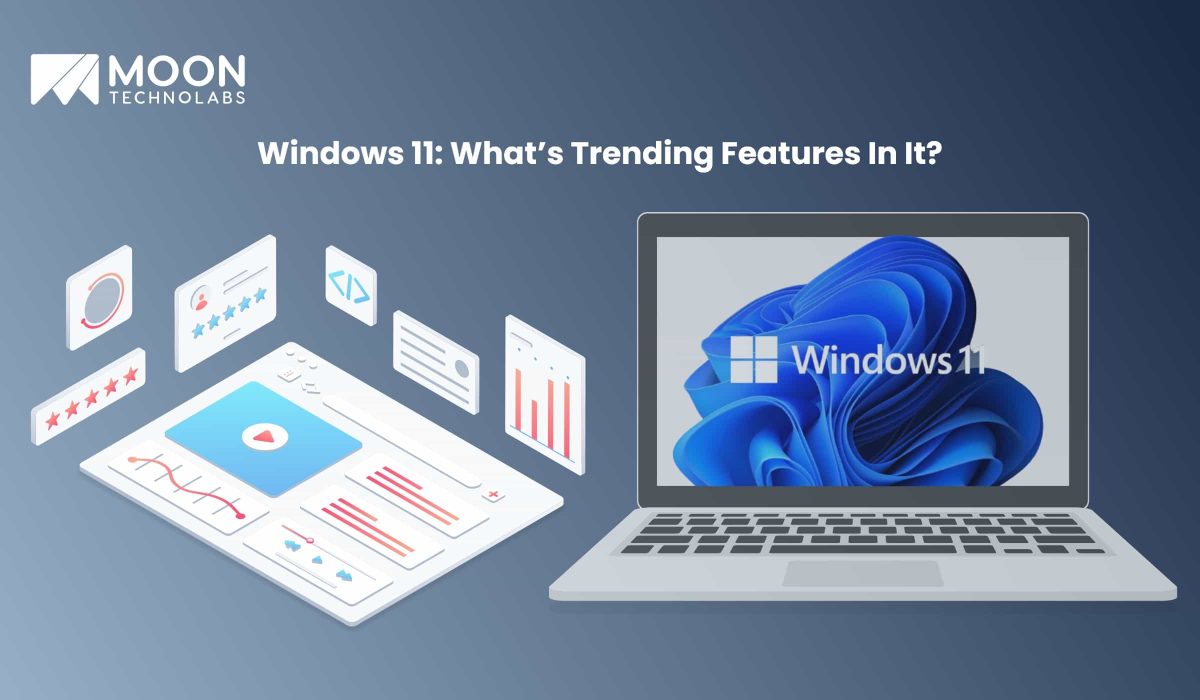 Microsoft has made it official – Windows 11 is on its way to all users, and it’ll arrive this fall.

Windows 10 has been enjoying the sweet fruit of success for some time. According to the records released by Microsoft, around 1.3 billion people installed Windows 10 on their PCs. About 300 million of them began using Windows 10 between 2020 and 2021. This technologically advanced and feature-laden version came out in 2015 and has been relatively stable throughout the years. Of course, new tools appeared from time to time within these 6 years in the form of clipboard history, screenshot utility, mobile integration through the “Your Phone” system, and a few others. All these things are about to change.

The next-gen OS from the house of Microsoft is now available to all, albeit a beta preview for now. The company announced it back on June 24 at a big event organized by Microsoft. The representatives of the company mentioned that the official version will come out on October 5th. Everyone from common users to every windows application development company will be able to use it. There’s an organization called Windows Insiders. It has been experimenting with this OS for some time. Naturally, there’s enough information in the hands of the best windows application development company at the moment. They’re aware of the appearance and feel of the user interface.

As already mentioned above, the official release date of Windows 11 is October 5th, 2021. The representatives of Microsoft announced at the first press conference that the OS will be out in the holiday season.

Those who own a computer with Windows 10 are, of course, eligible for an upgrade, but there’s a possibility that you won’t receive it in October. You may not get it in 2021, either because Microsoft wants to release updates in multiple tiers. However, installing Windows 11 through an ISO file may allow you to acquire an update by force.

If you want to recruit the providers of windows app development services, you need to know whether the company can run Windows 11 at all or not. These are the requirements a computer has to fulfill to be able to run the latest version of Microsoft’s flagship operating system.

The most notable change in Windows 11 is that it works only on 64-bit machines. The company has no plans of releasing a 32-bit version for now. Fortunately, all 32-bit software programs and games will work on Windows 11 smoothly and perfectly.

Microsoft also wants to reduce Windows 11 PC support. Only 8th generation Intel processors and above will work. Users with older CPUs may not be able to run Windows 11 officially.

Here’s a list of the features Windows 11 will have.

If you take a look at the pictures on the internet, or if you have the beta version installed in your machine, then the first thing that you’ll notice is the taskbar icons. The arrangement is quite similar to the Chrome OS. The Start button, however, still occupies the left side. The only difference is just that it isn’t at the bottom-left corner. It’ll be there with the other icons of various software programs. The corners will be tight-rounded, and the centered appearance will make the OS much more aesthetically pleasing. It will also be easy for users to start an app without moving the cursor around the screen too much. The animations, transparency, and clarity in icon design are the best examples of the evolution of the so-called “Fluent Design” system.

Those who provide windows app development services are quite happy to know that Windows 11 will bring back widgets. iOS 14 recently brought forth widgets. It’s understandable from this fact that Microsoft chose to go down the same road. The “Interests” and “News” panels were already there in Windows 10, but the next version will take it up by a couple of notches. The blog page of Microsoft contains a write-up on Windows 11 informing everyone that the latest widgets will provide personalized feeds to users. These feeds will utilize Artificial Intelligence and Microsoft Edge will do the rendering.

Unfortunately, Microsoft didn’t introduce changes to the new Settings app. Nevertheless, it looks good enough on the screenshots available on the internet. Tech experts are hoping that Windows 11 won’t be bothering users with those continuous dialogs plaguing Windows 10.

Many tech specialists believe that no other OS developer could match the ability of Windows in terms of positioning, opening, sizing, and closing different apps. macOS recently introduced it too, but Microsoft is, obviously, the first company to come up with this idea. The Snap Layouts is the latest feature that’ll let users select from a collection of different layouts. Users can populate the layouts with the windows of software programs they want to use.

Another new feature of Windows 11 is that it’ll give the ability to set various backgrounds for all virtual desktops to its users. It’s a sensible feature because people often use one machine for work-related purposes and another for personal requirements or entertainment. Users can rely on the Snap Layouts described above on every desktop computer they own.

Microsoft Teams is one of the most significant and popular software programs released by the brand within the last couple of years. The app had about 20 million active users two years ago. In 2021, Microsoft recorded a user base consisting of 145 million users. Naturally, Microsoft now wants to give it a wider reach. Only workplaces won’t be using Microsoft Teams anymore. There will be a button in Windows 11 that’ll provide easy access to Microsoft Teams to users.

Windows 11 has the ability to remember the previous app layout that the users were using. It’ll appear whenever they turn on their laptops after connecting them with a monitor. This tablet mode will be almost akin to the desktop mode, especially when compared to Windows 10. There will be a few subtle changes, such as the presence of more space between the icons on the taskbar. The new stylus will give audio, as well as haptic feedback. Voice typing will also become better.

Indeed, users will be able to use their favorite Android applications on PCs. It’s something that definitely deserves your attention. Apart from custom windows app development solutions, if you choose to build an Android app, it has to fit the screen of a laptop or desktop. Then again, only time will tell how well an Android app will work on a computer. Tech experts are already frowning because they know how spotty Android apps perform and when they run on Chrome OS.

The information provided above will appeal to both commoners and developers, but this next bit is specifically for app developers. Windows 11 has the latest PWABuilder3. It means they can create PWAs from web apps within a few minutes. Windows 11 will also come with WebView2 runtime that makes things easier for developers. They can leverage the web platform to build hybrid web applications. Other systems, such as Windows Terminal, as well as the new Microsoft Edge DevTools will also be usable as they’re part of the Windows 11 loadout.

Previously recognized as Project Reunion, the app SDK of Windows will make it easier for developers to integrate the features of Windows 11 in all custom windows app development solutions they work on. It’ll even allow developers to cater to the needs of billions of Windows 10 users. The Windows App SDK 1.0 will be available to developers later in 2021.

Developers will have many other tools at their disposal when they start using Windows 11. For instance, they can build applications that’ll run natively on ARM of Windows because the new ABI that’s ARM64 Emulation Compatible. Another thing worth mentioning is that the Microsoft Store will undergo specific changes with Windows 11. You have to stay tuned to learn more about the features of the new OS that’ll soon be available on all computers.

How To Increase The UI Performance Of Apps Designed Using React? »