Why Should Windows Users Turn Their Attention To Flutter 2.10? 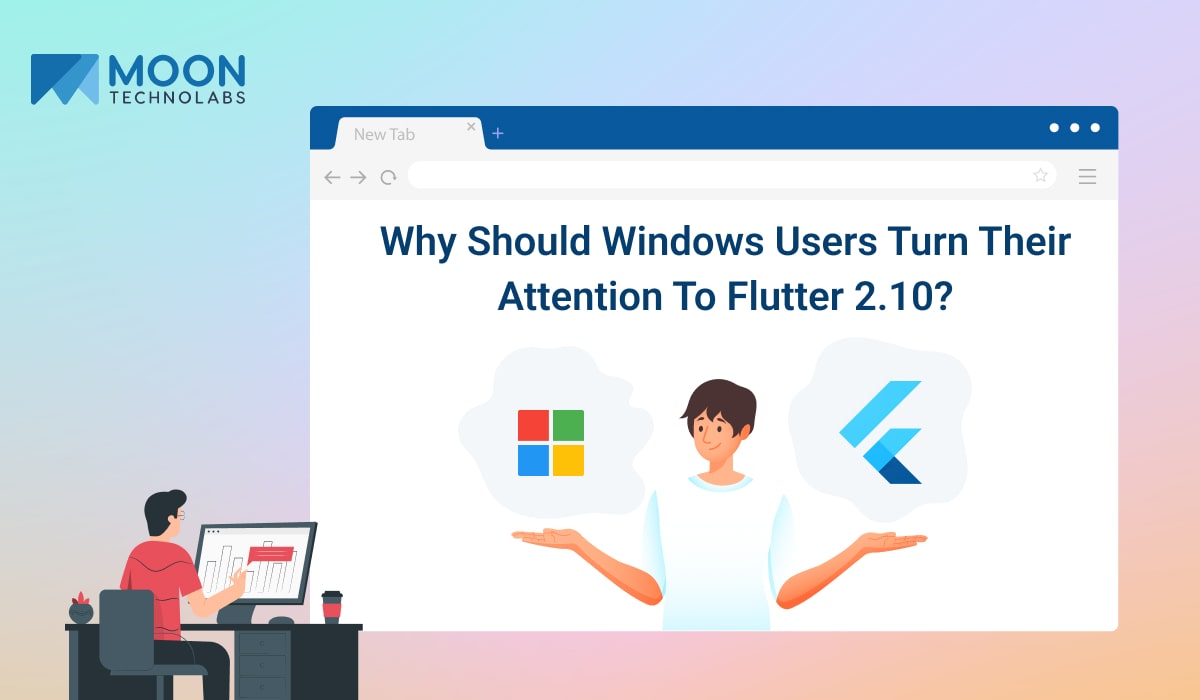 The creators of Flutter have tailored the latest iteration of the framework specifically for Windows, apart from adding a few other features. If you wish to find out what they are, just continue reading.

When it comes to operating systems for PCs, Windows will always occupy the first spot on any list. It powers more than one billion devices spread throughout the world. Also, the users of the OS have access to innumerable apps through the Microsoft Store, as well as the internet. With these apps, they can improve their computing experience from every aspect.

However, a lot more excitement awaits every business owner with a Flutter app development company on speed dial. The latest version of the UI tool, Flutter 2.10 is here. This topic will disclose the connection between your reasons for excitement with the latest iteration of Flutter.

The new version of Flutter, Google’s incredibly popular and highly used app development platform, has built a new path for developers to fabricate applications for Windows. These developers can even offer new and unique experiences at the same time. Here you’ll learn how. You’ll also find a list containing all the features of Flutter 2.10.

An explanation of Flutter

Before getting into the thick of things, take a look at what Flutter is all about. It’s a free-to-use open-source cross-platform app development UI toolkit designed and maintained by Google.

As long as you work with a legitimate Flutter app development company, you can expect the agency’s developers to belt out aesthetically pleasing, multiplatform, and natively compile applications built using only one codebase.

In other words, Flutter helps you convert your app ideas and dreams into reality. Your digital solutions will inevitably offer fulfilling experiences to your user base. Before the arrival of Flutter 2.10, there were a few limitations regarding the operating systems for which you could build applications. Now, this problem is a thing of the past.

Google designed Flutter as a framework for the development of app UIs. They wanted it to offer developers the ease, flexibility, and speed of creating feature-laden native applications for Android and iOS devices. Developers can resort to the same programming language with just one codebase to create apps for both Android and iOS.

The specialty of Flutter hides in its widget usage. Developers can design the entire UI just by connecting different widgets. As you can guess, the job is easy enough. Even developers with limited development knowledge or programming experience can create something using this UI framework.

Flutter even comes with a collection of readymade widgets to ensure a developer doesn’t have to rely too much on OEM widgets. They can even build their own widgets.

Additionally, it supports hot reloading, which, in turn, increases the productivity of an interactive environment. As a result, developers can make changes to an app while it’s running to inspect the results of their actions immediately.

Developers have used Flutter to create half a million applications already, and some of these apps are for world-renowned brands like BMW, Betterment, and ByteDance.

Google has been planning to increase the reach of Flutter for some time. It wanted to allow developers to use the platform for building apps for desktop devices and the web. With Flutter 2.10, a windows mobile app developer can create something for Windows-powered gadgets.

As Windows is an OS designed for computers with large screens and input devices, such as the mouse and keyboard, it doesn’t work as an OS designed for mobile devices. Furthermore, desktop applications use different APIs compared to the ones on iOS and Android gadgets.

What does Flutter 2.10 bring to Windows? Well, for starters, this framework now works on Windows because its creators tailored it specifically to work on this OS. Apart from that, Flutter creates a combination of a Dart-based framework and a C++ engine.

Just as it integrates seamlessly with mobile UI development, the latest version of the framework can communicate with Windows natively. It’s in charge of translating and dispatching the messages of Windows to paint its UI. At the same time, it handles events, such as window resizing, and works with the current modalities of Windows for internalization like the editors of input methods.

The support of multiple Microsoft teams has been crucial in helping Google realize the dream of bringing Flutter to Windows. The “Fluent” team of designers provided the icons for Flutter applications on Windows, while the “Accessibility” team ensured that the framework receives support for screen readers from the first day.

Furthermore, the tooling partners of Flutter, such as FlutterFlow, Rive, Realm, Nevercode, and Syncfusion, also updated their support for Windows.

In short, a developer specializing in Flutter can publish apps on the Microsoft Store, or a windows mobile app developer can create applications using Flutter, provided the service provider knows how to work with Dart.

Here’s a list of everything else Flutter 2.10 brings to the table.

This new release has early support for the dirty region management system. Whether on Metal or iOS, app developers can enable partial repaints for just one dirty region.

This change decreased the 90th and 99th percentile rasterization times based on the magnitude of specific benchmarks and GPU usage on these standards from 90% to less than 10%.

Flutter 2.10 also includes various improvements for Android. Whenever someone creates a new application, the framework supports the latest version of Android. Additionally, the creators have enabled multidex support automatically in it.

Flutter also suggests resolution steps for the most common problems.

Apart from performance-related improvements, Google has added a few platform-specific features and enhancements. You already know about the ones added to Android, but what about iOS? It gets a smoother keyboard animation and another new improvement that comes automatically to an app without doing anything.

Additionally, Google even improves the camera plugin’s stability for iOS by fixing a few crashes associated with the edge. Finally, 64-bit architectures of iOS get a new memory-saver feature – compressed pointers.

Flutter 2.10 marked the initiation of the transition to Material 3. It incorporates generating a color scheme from just one seed shade. Developers can build an instance of the new type of ColorScheme using a color of their choice.

This release even has ThemeData. The useMaterial3 flag allows components to adopt the new appearance of Material 3.

Flutter 2.10 has a few enhancements for web app development too. For instance, in the earlier releases, scrolling to the end of a multiline TextField on the web didn’t work appropriately. This release, however, brings edge scrolling for textual information selection.

When the selection moves outside the text field, the field will scroll down to show its extent. This new feature will be available on both desktop and web applications.

Here’s another new package that replaced the older Flutter driver package as the recommended method of performing integration testing, including new features like the Firebase Test Lab support and support for the web and desktop platforms.

Apart from everything described above, Google introduced a few changes to the Flutter DevTools. One feature worth mentioning is that it becomes much easier for a custom mobile app development company to use the DevTools from the command line.

Instead of utilizing the pub global activate for downloading and running the newest iteration, developers can use the Dart DevTools to make the version compatible with the version of Flutter they’re using.

With the appearance of Windows 11, Android apps are slowly making their way into Windows-powered PCs. Now, Flutter makes it easy for developers to create high-quality apps for Windows without compromising performance or compatibility.

To put it simply, Flutter has brought forth a new wave of innovation, creativity, and augmented computing. Moon Technolabs, a custom mobile app development company, understands this. That’s why its developers are already trying their hand at building apps using Flutter 2.10 for Windows devices, whether mobile or desktop. It’s safe to say they’re succeeding in their venture.

Which Brands Are Using Xamarin To Build Their Digital Solutions? »

« React Developers Need These Tools To Increase Their Potential