Why Does .NET MAUI Deserve Your Attention If You’re Planning To Use Xamarin? 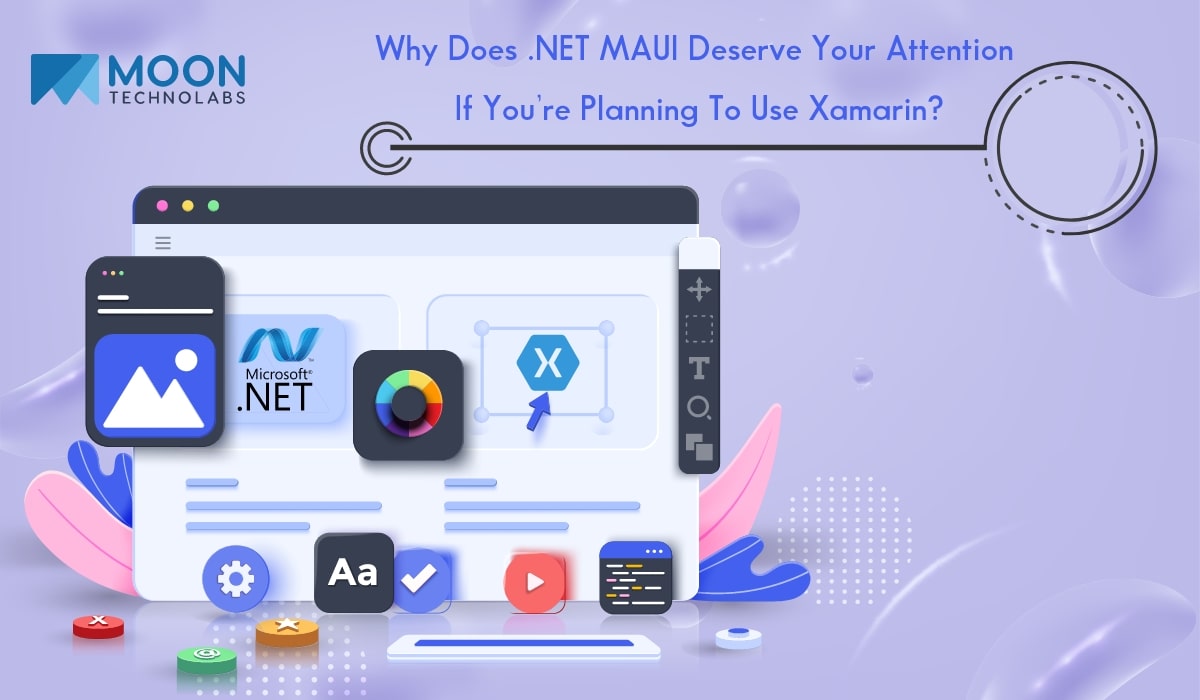 .NET multi-platform app UI or MAUI is the latest digital solution from the esteemed house of Microsoft. It’s part of Xamarin, and if you’re planning to use it, you should definitely learn more about .NET MAUI. This topic contains pertinent information.

.NET MAUI, also called .NET multi-platform app UI, is a cross-platform framework. Microsoft, the creator of .NET MAUI, designed it specifically for building applications for mobile and desktop devices. The designers of .NET MAUI used XAML and C# to fabricate it. However, the official documentation for it is still a WIP.

When you use .NET MAUI, you can design applications for iOS, Android, Windows, and macOS. In reality, your developer team can even rely on it to create apps for devices using one shared code.

Apart from that, .NET MAUI provides an option for including resources and source codes specific to individual platforms. So, what’s the ultimate purpose of .NET MAUI? It enables a .net development company to leverage as many resources as possible in one codebase. .NET MAUI even simplifies the task of the developers by offering only one project.

This project will support every platform, including iOS, macOS, Windows, and Android. This topic aims to elucidate the future of Xamarin and .NET MAUI and everything else you must know before you initiate a project.

What can .NET MAUI do for app developers? It allows them to utilize a straightforward API for cross-platform development to access every platform’s native features and UI controls. Understandably, developers can build no-compromise UX while sharing even more codes than they did in the past.

So, how can a .net development company use .NET MAUI? Moon Technolabs is one of the app development agencies already using it. The experts working there state the following.

“.NET MAUI lets developers create code once and run it wherever they want by integrating iOS, Android, Windows, and macOS APIs into one API. This platform offers this feature while also providing full access to every native platform’s features.”

.NET 6 is already popular among app development agencies all over the world. It includes numerous platform-specific frameworks, even .NET for iOS, Android, Windows UI library, and macOS.

The Base Class Library of .NET 6 is available to these frameworks. The code from this library negates the intricacies of the underlying platform.

.NET MAUI is just one framework, but it’s powerful enough for developing desktop and mobile app UI. Now, the BCL enables apps operating on various platforms to share common business logic. Each platform can define the UI of an app and separate models for ascertaining how every piece of a UI interacts and communicates.

The developers of a .net development company can build a different UI for every platform using the appropriate platform-specific framework. In this case, it’s .NET for iOS, Android, macOS, or WinUI. However, coding specialists have a crucial role to play here. They have to maintain this codebase for every device family.

The abilities of .NET MAUI

.NET MAUI has a lot to offer. It provides several systems that a developer can use to perform actions, display data, select data, indicate activities, etc. This particular part of the write-up describes everything that .NET MAUI has to offer.

During your search for xamarin app development services, you need to be vigilant. After all, .NET MAUI has specific requirements that the development agency of your choice has to fulfill. Here are the requirements.

With only one click, the coders of the project can deploy to whichever target they want, whether simulators, desktops, or emulators.

The inbuilt cross-platform resources of .NET MAUI allow developers to upload pictures, translation files, or fonts to a single project. It even sets up native hooks for your service providers so that they can pay attention to coding only. They can upload the files of the source code for a specific operating system and use the native APIs under platforms.

These are the benefits of this particular feature.

From everything explained above, it should be clear to you that .NET MAUI will help the providers of xamarin app development services immensely. It’ll even bolster the position of Microsoft and allow it to stand toe to toe against popular cross-platform frameworks like React Native and Flutter.

However, developers must first learn to distinguish between Xamarin and Xamarin.Forms before delving into the sphere of MAUI. Xamarin simply provides libraries and tools to .NET and helps developers create mobile solutions for Android, iOS, and Windows devices.

Xamarin.Forms, on the other hand, is a cross-platform framework used in creating mobile applications from one shared codebase. Xamarin.Forms is somewhat similar to .NET MAUI, except for one basic difference – .NET MAUI lets developers build apps for several platforms by using only one project.

Xamarin is nothing but a platform and Xamarin.Forms is a feature. So, what is .NET MAUI? It’s a cross-platform framework of an open-source nature. Developers from organizations like Moon Technolabs use it to develop applications for desktop and mobile devices. It has a common codebase of C#, resembling Xamarin.Forms.

With the arrival of .NET MAUI, Microsoft officially supports Android, macOS, iOS, and Windows. It also delivers performance enhancements and tighter integration with all the tools and services Microsoft has to offer.As .NET MAUI is a relatively new entrant, finding an agency specializing in it can be a challenge. However, Moon Technolabs employs .NET development specialists with an in-depth understanding of .NET MAUI. You should get in touch with this agency if you don’t want to waste too much time searching for relevant experts.

What is .NET MAUI?
.NET MAUI is a relatively new cross-platform app development framework designed for creating apps for desktop and mobile devices busing XAML and C#.
Why move Xamarin.Forms apps to .NET MAUI?
Experts believe that Xamarin.Forms is on its way out. Naturally, developers should consider moving their apps designed using Xamarin.Forms to .NET MAUI. However, it’s vital for developers to learn how to do it first.
Where will you find .NET MAUI experts?
Moon Technolabs is an app development agency with a strong presence in multiple nations. You can hire competent developers from this organization.

« What Makes Swift The Best For iOS Enterprise App Development?