Which Android App Development Tools Deserve Your Attention This Year? 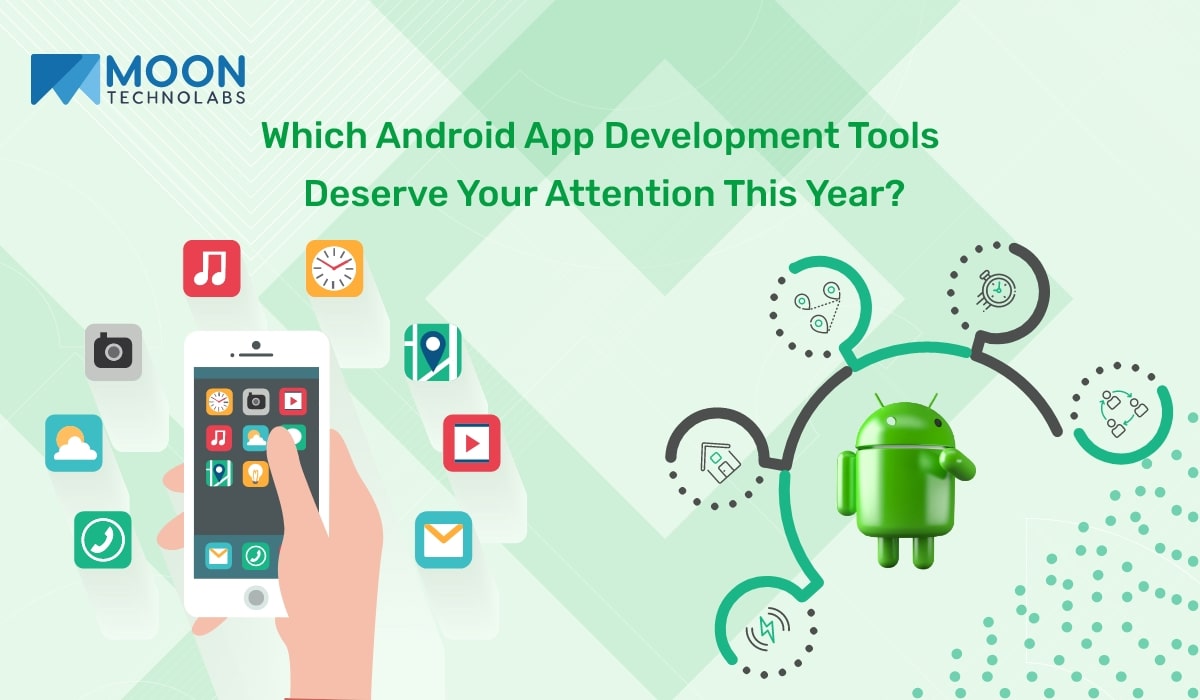 So, you want to bolster your Android app development projects even further. Well, if you leverage the power of these app development tools for Android, you’ll achieve what you seek.

Android is still the prime market dominator. According to market researchers, the market share of Android mobile is about 73% as of May 2021. iOS is also famous, but only the products manufactured by Apple use it. Android, on the other hand, has its fingers in the pies of almost every device fabricated by every brand.

It’s one of the main reasons why businesses from all four corners of the world resort to Android for business-specific projects. They hope to reel in more users from various economic backgrounds.

Android also stands out as the winner in terms of the number of apps currently available to users. Google Play Store had about 348 million applications, whereas Apple had only 22 million in the first four months of last year.

Quite naturally, the demand for every competent android app development company is high in the market. It seems that this demand won’t die down anytime soon. Young aspirants planning to become Android app developers will also be able to take up a good job with a handsome salary.

Now, you don’t have to be a developer or an app development enthusiast to go through this write-up. As an entrepreneur or business owner, you’d probably want to invest in app development. To that end, you must know what tools your android app development company will use to work on your project.

Here you’ll find a list of frameworks, IDEs, libraries, and other things that can take your Android apps to the next level. You mustn’t forget that you’ll survive in the market only if you bring something different. In that regard, these not-so-common tools can prove to be your trump cards.

It’s safe to say that your development team will have to do a lot of programming to create an Android application. By default, the process incorporates reviewing, inputting, and updating the code. Understandably, developers spend most of their time working with the IDE tools of Android.

The first IDE tool worth mentioning is called Fabric. It’s a platform used by the creators of the Twitter mobile app to build it. Fabric lets developers create better applications by providing them with a collection of “kits.” They contain everything your developers need to market the app, beta-test it, or promote it.

Android Studio, based on IntelliJ ID, is the official IDE for building apps on the Android platform. Combined with the powerful code editor of IntelliJ and developer tools, Android Studio boasts additional capabilities. If you hire android developers from world-renowned agencies like Moon Technolabs, you’ll improve app development efficiency.

The popularity of AIDE becomes obvious from the fact that it holds a record of 2 million downloads. It allows your developers to designs applications or even websites directly from an Android-powered device. It has interactive programming training systems for beginners. A first-timer can use it to improve their coding skills and earn stars.

Cross-platform app development frameworks are collections of tools enabling app developers to create native apps or apps that resemble native variants. Even if you hire android developers, they can create apps for Windows, iOS, and even the web using just one codebase. In today’s swift-paced tech environment, you require cross-platform tools at your disposal.

Flutter is extremely popular. You may be even familiar with its name if you keep tabs on app development technologies. However, it hasn’t been around as long as other frameworks. Nonetheless, Flutter managed to build its place in today’s market. With just one codebase, your team of app developers can use it to build high-performance applications.

This one is the leading cross-platform app development framework. Created using React, it’s a highly-recognized JavaScript toolkit used in fabricating app UI. Its creators optimized it specifically for smartphones.

The primary advantage of React Native is that it lets developers construct cross-platform solutions using JavaScript, apart from platform-specific languages like C, Java, and Swift.

Despite being modern, Kotlin is an already matured language. It’s also concise and safe, apart from being interpolable with Java and other programming languages. It offers different ways of reusing the code between several platforms and productive programming.

The creator of Kotlin called JetBrains designed it as a statistically-types general-purpose programming language.

Firebase isn’t just a tool. It’s an all-inclusive collection of tools for Android developers. Firebase is a package of cloud services from Google for web and mobile developers. It contains everything from secure authentication to AdMob monetization. It also boasts analytics systems and machine learning kits.

GitHub is a repository hosting service of Git. When performing in a group, GitHub becomes an online platform where developers can share projects. They can also keep tabs on all the versions of those projects.

Your developers will benefit from it if they need to create a backup of their work, collaborate with others, and find code examples and tutorials.

MLkit or Machine Learning Kit is all about machine learning. With every passing day, ML is becoming a crucial part of app development projects. Unfortunately, incorporating ML isn’t easy, even for the best developers out there. You have to look for some of the best providers of android application development services for utilizing ML.

Only such experts have an in-depth understanding of data analysis, neural networks, and others. They receive training to optimize these models and run them efficiently. You’ll find competent Android developers at Moon Technolabs.

It’s safe to say that the performance standard of an Android application is the most vital aspect of development. If your app works too slowly, users will eventually reject it. On the other hand, fast-performing applications usually succeed.

With Flow Up, your app development experts can track the production app’s performance. By using this tool, they can produce records of your metrics and analytics, such as disc consumption and CPU, FPS, memory usage, bandwidth, and others. All of it is possible through the dashboards.

When it comes to measuring Android mobile app performance, the most preferred tool is JMeter. It’s a free, open-source program with capabilities that a trained developer can expand with plugin support and a user-friendly interface. Various testing options are available, including several controllers and load generators.

The Android Virtual Device Manager or AVD Manager is yet another powerful tool for Android Studio. It’s a computer emulator that allows developers to run apps built for Android.

It provides developers an opportunity to inspect performance standards and responsiveness on different Android devices, regardless of resolutions, versions, or screen sizes.

Facebook is the creator of Stetho, a debugging or bridge tool for Android. It’s an open-source solution that gives developers access to Chrome development tools. This feature is native to desktop browsers. Stetho possesses a network inspection system for previewing pictures, HAR trace exporting, and JSON response assistance.

DebugDrawer offers easy accessibility to the data and settings of a device. It can also simulate connection and location state. This particular tool for Android app debugging eases the process of testing by allowing developers to view the device info within moments.

Many other tools for Android development are there, other than the ones mentioned above. It won’t be possible to include all of them in this write-up, though. If you wish to learn more about them, consider researching the web.

You should contact the company by visiting its website to learn more about what it can offer you. You’ll find the email address and phone numbers there. Besides, getting in touch with an agency is mandatory if you don’t have in-house developers. Also, every developer has unique preferences. The tools that you prefer may not be their first choice.

« Why Do Developers Prefer Ionic To Build Progressive Web Apps?