What’s New in iOS 15? Know About its Trending Features 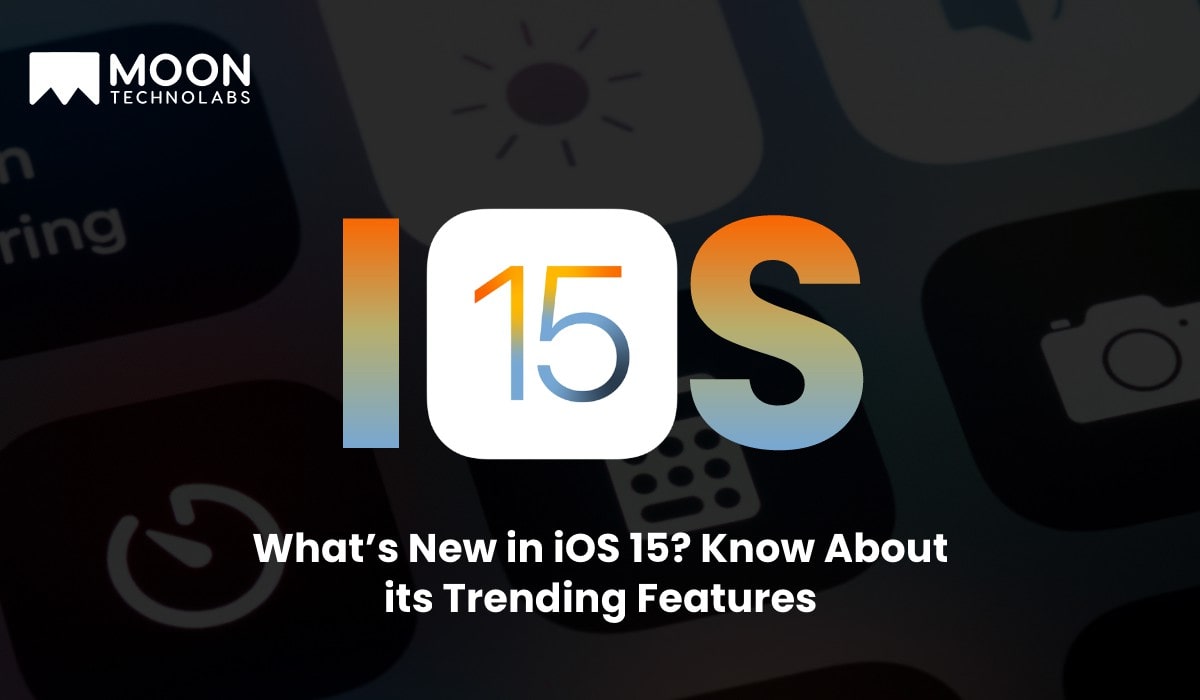 It’s almost time for everyone to find out what iOS 15 will be bringing to the table because Apple will be giving an update on it in WWDC 2021 scheduled to take place on 7th June 2021. Here are a few rumoured features about the latest version of iOS that won’t be available to users until later this year.

Apple, the world-renowned tech giant, will be unveiling its upcoming iOS update, iOS 15 released on 7th June 2021. It will do so at the WWDC conference. Quite naturally, a lot of rumours are floating around about iOS 15 and what it will bring to the table. As a business owner who caters to the requirements of customers over the internet, you need to know more about iOS 15 before you delegate your next app development project to your trusted iOS app development company in India. Regardless of what you build today, iOS 15 will impact it, and for that, you have to prepare yourself accordingly.

Now, the full version of iOS 15 won’t ship out until later this year. However, WWDC will give you and everyone else in this world a chance to see what specialities will separate iOS 15 from its previous versions. You will also be able to contemplate what effect it will have on iOS apps and the iPhone 13 that will run on iOS 15. This smartphone model will also be out for sale later this year.

As you can probably guess, iOS 15 will bring a fairly significant update for the iPhone, especially because the company changed a lot of things with iOS 14 and the way they overhauled it. iOS 14 gave an entirely new look to the iPhone with its newly designed widgets on the home screen. iOS 14 even added the App Library to help users organize their apps automatically and the ability to change the default browser and email client. iOS 14.5 brought many other changes when it arrived. It gave users new privacy features. By releasing iOS 15, Apple aims to continue the steady flow of augmentations and improvements.

Depending on the rumours, conjectures, and leaked information – including a few last-minute details – here’s what you need to about iOS 15. Just remember that the information provided here is subject to change. So, after reading this,the new operating system will debut on the upcoming iPhone 13 and will be available on other iPhone models.

According to a specific report, there is a possibility of iOS 15 coming with a privacy dashboard that will let a user see what third-party apps share about them. The same report also states a few changes that will appear in the iPadOS 15. As you can see, it’s a significant point of consideration for anyone planning to work with an iOS app development company in India on a project.

Apple usually releases the latest version of its iPhone OS at the same time as a new smartphone model, and in most instances, the iOS update pops up a few days earlier. It mostly happens in September, but the COVID-19 pandemic forced the company to change its approach a bit. The pandemic prevented Apple from launching the iPhone 12 series until October 2019. iOS 14, however, managed to stick to its designated timeline in September 2020. Keeping these facts in mind, it does seem probable that the downloadable version of iOS 15 will drop in September 2021.

You won’t have to wait too long to get a glimpse of iOS 15, though. Apple will surely discuss the software updated at WWDC. This annual conference for developers runs from 7th June to 11th June. The opening keynote has already taken place at 1 P.M. ET/10 A.M. PT.

Providers of iPhone app development services will also get an iOS 15 beta at WWDC, and Apple will probably adhere to the pattern of its previous iOS releases, including iOS 14, by providing a public version of iOS 15 Beta. Typically, this public beta variant appears within a few weeks after WWDC. It means you can expect your partnering company to get it by the end of this month.

You can enrol in Apple’s public beta program by visiting the website of Apple’s beta and logging in with your Apple ID. If possible, you should use the same device to visit the website on which you’re going to install the beta version.

Now, it’s time to take a look at the features that will come with iOS 15. You should go through them thoroughly to understand what you and your provider of iPhone app development services have to keep in mind while creating an application.

Based on what experts are saying about iOS 15, the operating system itself will be significantly more customizable. Users will even be able to change some of the default applications. iOS 14 laid the foundation of this trend by allowing Safari and Mail to undergo changes. With iOS 14, users have the opportunity to change their default web browser and email service provider. Also, the iOS 14.5 Beta lets a user change his/her default music platform of choice. This particular feature will likely be present in iOS 15.

The Settings menu is a common system present in all iOS devices. It fundamentally houses all the possible device settings users can play around with. It has been the same over the last few years, but it did bring tons of new features and menus that led to a decrease in intuitiveness. Redesigning the same can help Apple fix this issue and bring back the lost intuitiveness.

iOS 14 introduced widgets to its user base, which, in turn, became an excellent addition to the OS of Apple. However, in their present state, widgets aren’t as useful on iOS as they are on Android. After all, they aren’t interactive. That’s why iOS 15 will probably introduce interactive widgets. As you can guess, users will be able to interact with these widgets. They can change volume, enable specific toggles, etc. iOS 15 will reportedly bring more sizes to the widgets too. You need to come up with ideas about how to make this feature work with you. You must also wait until the beta version becomes available to everyone. After that, you can hire an experienced iOS app developer.

4. Refurbished lock-screen and an always-on display

As already mentioned earlier, the iPhone 13 will be here soon after the launch of iOS 15. Naturally, a few rumours are infesting the air about this device too. One of those rumours is that it will score an always-on display that matches the Apple Watch OS. It will scale down the refresh rate all the way to 1Hz and reduce battery usage significantly. From a technical perspective, the always-on display system will depend mostly on the hardware used. Understandably, it won’t be available on older iPhone models. The OS itself needs to change to be able to accommodate this feature. Rumour is that the lock screen will get an update to be able to showcase notifications in a much more friendly way to work with the always-on display feature.

Everyone knows about Apple’s mad-on for privacy! The newest iOS 14.5 Beta, for instance, improved the company’s privacy game even further by automatically redirecting safe browsing data through their own servers. These servers act as a proxy of some kind to protect a user from the eyes of advertisers spying on their data. Google is probably the finest example. The same privacy feature will be part of iOS 15 too, but after WWDC conference, this information will cease to remain just a rumour. Of course, you need to check it out to find out.

Well, it’s clear that you’ll see many new things in iOS 15. Some of the rumours and conjectures mentioned here may even turn out to be perfectly true. Just make sure that you go through those features and then hire an experienced iOS app developer. After that, you can discuss with your service provider how to accommodate your apps on the latest OS.

How Are Wearable Devices Influencing The Healthcare Industry? »