What’s New In Angular 13 And Why Should You Use It For Web App Development Projects? 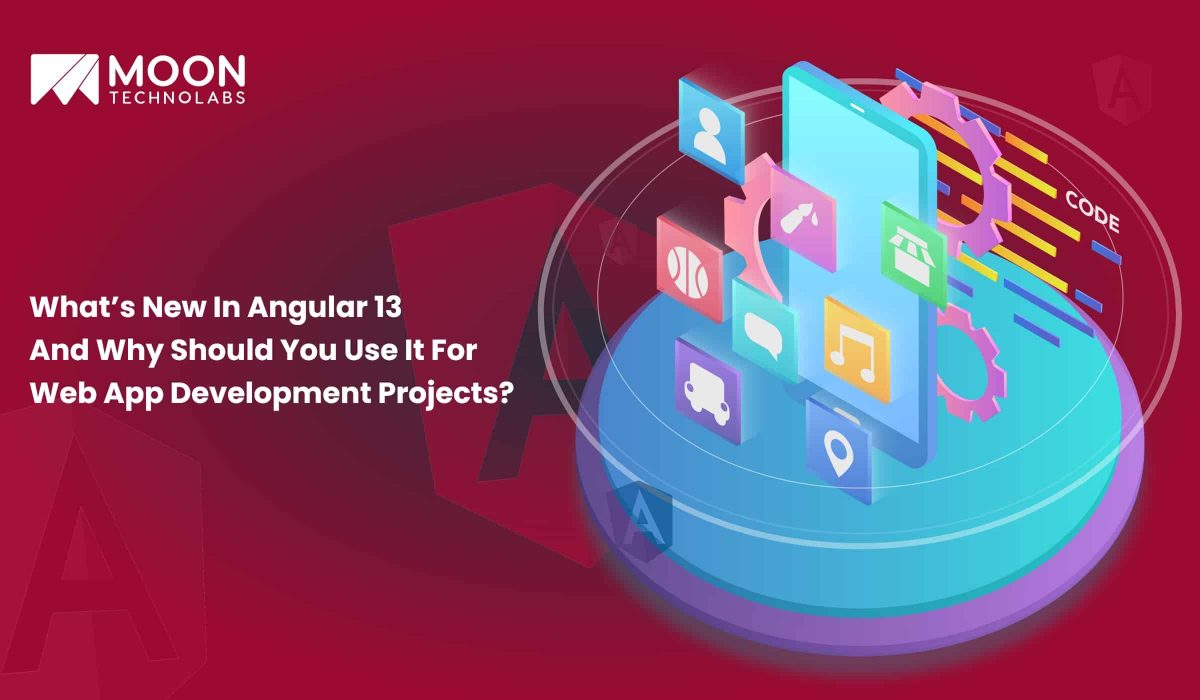 When it comes to holistic solutions suitable for building the front end of web applications without any extra plug-ins or frameworks, Angular stands out from the crowd. It’s one of the best frameworks currently available for building web applications. Something designed using Angular will always look good, deliver an exceptional user experience, and perform incredibly well. Angular 13 is also on its way. It’ll soon hit the markets and will take the game of web app development to the next level.

Businesses all over the world are doing everything with their power to achieve digitization in a bid to enhance their online presence, as well as business growth.

Today, the world of the web is full of websites, and they’re competing against each other fiercely to draw web traffic. To get ahead in the competition, businesses soon experience the need for an interactive mobile or web application. At the moment, apps are mandatory in achieving success in the field of business, regardless of the industry.

Among all the programming languages available these days, web development experts prefer using JavaScript more than anything else. If you have plans to invest in web app development services, then you’re probably wondering which framework you should go for to get the most optimal results.

According to the outcome of a survey conducted by tech experts last year, Angular is one of the most recognized and widely used web frameworks, particularly for front-end development. You should look for an angular web development company because you’ll get to leverage the power of this robust tool for front-end development. It assists developers to write code that’s readable, easy-to-use, and maintainable too. You won’t find anything better than Angular for building single-page applications or SPAs on the web.

A bit about Angular programming

The framework of Angular uses a programming language called TypeScript that closely resembles the more recognized JavaScript. When Google introduced it to the world back in 2010, it took the entire world, including the developer community, by storm. However, Google rolled AngularJS back and released an enhanced version of the same in 2016 and named it Angular v2. Anything developed using Angular 2 will run without hitches of any kind on Angular 4.

Soon after that, Angular 6 appeared with specific changes. The alterations shifted the focus from the framework and diverted the same to the toolchain. As a result, it started running faster with Angular through ng update, ng-addons, CDK components, decorator, metadata, Angular elements, CLI command reference workspaces, and more.

Angular 8 came with dynamic imports to fix the sluggishness of routes. It had TypeScript 3.4 support, Angular Ivy, and differential loading for app code. It even introduced a method called Angular Universal for the server-side rendering of applications to HTML.

On 12th May 2021, Angular 12 arrived and took the so-called “Ivy everywhere” vision of the creators of the framework one step forward. Ivy earned fame as a next-gen pipeline for rendering and compilation. As it offers a significantly faster “ahead of time” compilation platform, almost every recognized angular web development company uses it.

An insight into Angular 13

It hasn’t been long since the creators of Angular released the 12th iteration, but they’re already on their way to releasing the 13th version. Angular 13 is fundamentally a pre-planned upgrade to this TypeScript-based framework for the web launched by Google eleven years ago. The organization has published two beta versions of Angular 13 on 4th and 11th August consecutively. The beta versions are available on GitHub, and the best providers of angular web development services are going through them right now.

In terms of the router, experts have suggested a change to fix a certain situation where the default serializer will drop its contents later, including a question mark in the query parameters. Previously, it resulted in inappropriate parsing for navigation to “/path?q=hello?&other=123.” With this change, parsing will always be correct.

As the creators of Angular release new versions after a six-month gap every time, the 13th version should be available to the providers of angular web development services by November. It seems probable considering the fact that Angular 12 arrived on 12th May 2021.

Here are a few other changes proposed by experts in Angular 13.

More Like This: Gmail, PayPal, Microsoft Office And Forbes Are Using Angular – Learn Why?

Well, there isn’t a lot of information available about Angular 13 other than everything mentioned above. Besides, it will be available within the next two months. Everything will be clear to you, as well as Angular web developers. For now, you should focus on why it’s better to use Angular for your web app development project. Here are a few reasons why every expert out there will suggest building a web application with angular.

Angular has rigorous and licensed documentation to allow developers to discover the information they need. Naturally, they can come up with the necessary technical clarification as soon as possible and fix problems the moment they emerge.

The popularity of Angular has resulted from the additional tools and components it possesses. You can ask your developer team to incorporate them into your web application. In doing so, you’ll gain additional productivity, as well as functional enhancements.

Indeed, Google is the tech giant that oversees Angular, and this very fact is compelling enough for most business owners to hire Angular development specialists for their projects. At a developer conference that took place four years ago, Google announced that it’ll be supporting Angular for as long as possible.

4. Architecture based on components

Angular shifted from the Model View Controller or MVC architecture to its component-based counterpart. It did so with the release of the second version. That’s why it’s possible for developers to split Angular applications into logical components and independent functional components. Developers can decouple and reintegrate the components of Angular effortlessly and reuse the same in other sections of any application.

As you already know, the abbreviated term CLI stands for Command Line Interface. It also happens to be the most recognized feature of this framework. It has the power to mechanize the entire workflow of development while building optimizers, creating app configurations, and initializing the same. Everything on Angular is relatively simple compared to other web app development frameworks because of the CLI.

The Angular framework is capable of manipulating the Document Object Model or DOM, and it can connect the element traits, JavaScript, and jQuery to work in the underlying HTML. As a result, all web apps designed using Angular can load faster. If you’re willing to move forward with digitizing your business, you must definitely consider building a web application with angular.

How Do You Connect Your MongoDB Database With Node.js? »

« The 10 Best Food Delivery Apps In The USA