What Makes Swift The Best For iOS Enterprise App Development? 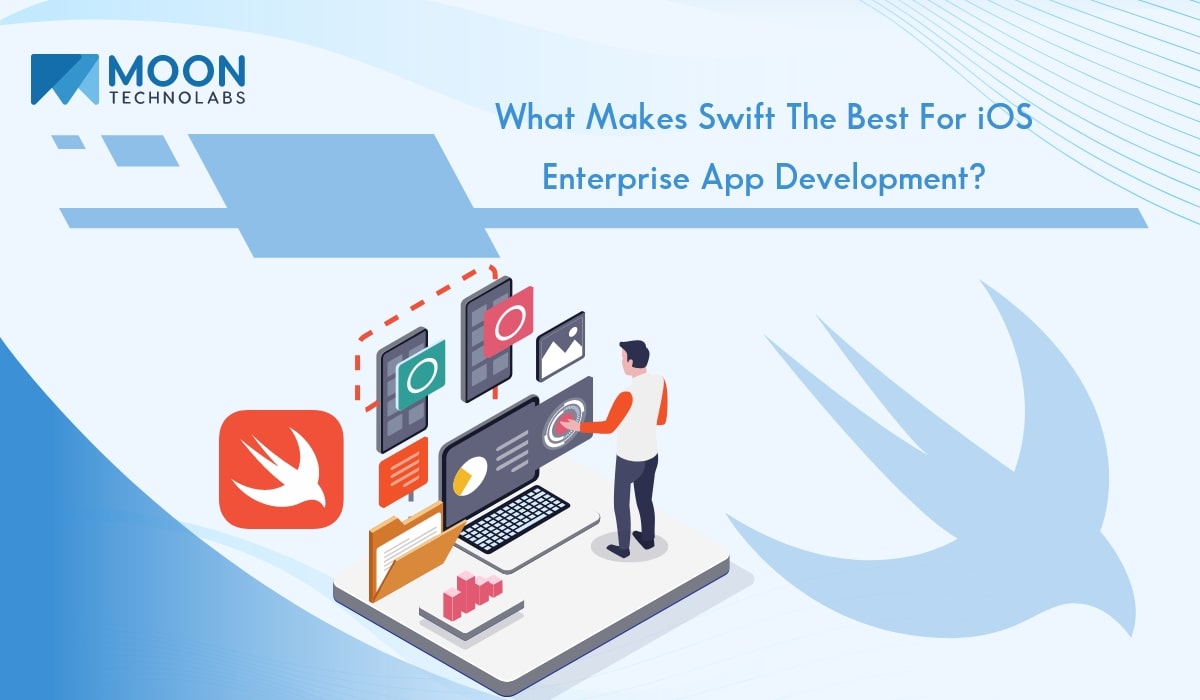 There isn’t anything better than Swift when it comes to building enterprise-level mobile applications for iOS devices. If you wish to find out why, you need to go through this write-up.

From the first day, Swift has been creating ripples in the sphere of mobile app development for enterprises. It has the power to open doors of new opportunities and empowers entrepreneurs to take the next step in the world of business.

“Brands like Yahoo Weather, LinkedIn, Lyft, and Hipmunk have already created or enhanced their iOS applications in Swift. When will you do the same?”

So, if you’re the owner of an enterprise, and if you’re searching for app development platforms for iOS, you should hire swift developer for your project. Here you’ll find a few compelling reasons why. These reasons come directly from some of the most experienced experts.

Before getting into the details of the subject, you should check out the following pieces of statistical information. It’ll help you contemplate the gravity of the fame earned by Swift in terms of enterprise app development.

Based on what Wikipedia says, Swift came into existence in 2014 at the Worldwide Developers Conference of Apple. The first upgrade for the platform, version 1.2, came in the same year. Then, in 2015, Swift 2 made its appearance at the WWDC 2015.

There are several methods of evaluating programming languages. The two primary features include capabilities and syntax.

When it comes to open-source dynamic libraries, Objective C contributes to integration. They contain prepared solutions needed for performing routine chores. They also decrease application size. As a result, you allow your users to save space on the memory of their devices.

Once you hire swift developer, just ask them about syntaxes. They’ll say that the term “syntax” points to a collection of rules and regulations. They underline the order, as well as the interdependencies of the words used in programming languages.

Originally, Swift was part of Objective C. However, specific differences separate the two at the moment. The number of these differences also keeps on increasing every year, at least in terms of the invocation methods, cycles, conditions, and declaring classes, constants, and enumerations.

In simple terms, the structure of Swift is simpler compared to Objective C. By using Swift, your developers can fabricate out-of-the-box user experiences. Sooner or later, their work will take your business to the next level.

Now, this topic will get into the main subject – the reasons that make Swift the best for enterprise iOS app development.

Today, almost every person out there is technologically savvy to a specific extent. At the very least, they can recognize modern technologies the moment they lay eyes on them. Users will prioritize mobile apps featuring the latest techniques and technologies.

As Swift is a relatively new entrant in the field of mobile app development programming languages, it will prove to be advantageous for your project. The top iOS application development company has been using Objective C for a long time, but not Swift.

You may not be aware of this fact, but the truth is that Objective C has been around for thirty-three years. On the other hand, Swift made its entrance in 2014. In reality, Apple released a more stable variant on 21st April 2017.

The syntax of Swift is clean, which makes it easier for developers to read, write, and enhance the code. Additionally, your developers won’t have to write as many lines of code in Swift as they have to on Objective C.

This fact implies that your development team won’t need too much time to conclude the development process. Your app development expenses won’t be unnecessarily high, either. However, you need to ensure that the agency of your choice charges hourly rates.

The open-source nature of Swift makes it easier for developers to leverage the power of this programming language across several platforms. They can also use it for the backend infrastructure of your app project. Your developers can also upgrade the source codes with ease, apart from bug trackers and email lists from time to time.

Due to the robustness of Swift, you can go through the technical documentation whenever you want. This feature is more important for your developers, of course. It enables them to build innovative and futuristic mobile solutions.

Other than that, app development experts can send their valuable feedback to Apple to improve the language. They use Jira for it, which is a bug tracker.

If you hire the top iOS application development company, you can rest easy at night knowing that you’ll get your enterprise app within the shortest possible time.

Swift utilizes surprisingly fast algorithm metrics. These metrics offer the advantage of higher speed. Developers from all four corners of the world love Swift for valid reasons, after all.

Based on a survey conducted by StackOverflow in 2017, Swift became the fourth most preferred programming language. 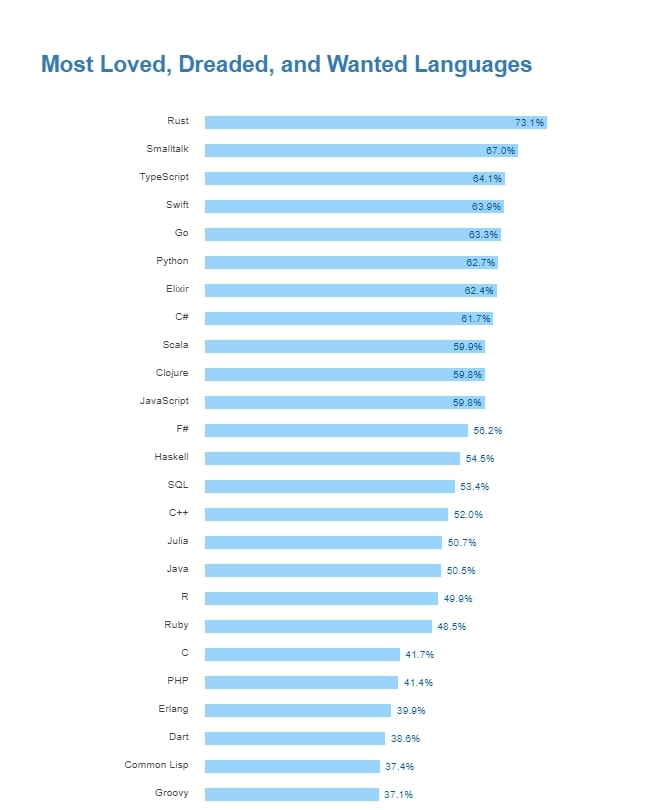 If you consider building your iOS enterprise application with Objective C, your developers won’t be able to update it without using C. No such dependencies exist in Swift. Naturally, maintaining an app becomes a piece of cake for developers of all experience levels.

Today, app safety is a mission-critical consideration for all businesses. You must also know how stringent Apple is when it comes to app security.

In that regard, Swift arrived and immediately eliminated all the pitfalls usually associated with Objective C. Rest assured, you’ll receive a profoundly safer enterprise iOS application. Objective C won’t guarantee such a high level of safety.

There’s an object-link in Objective C that consumes a significant amount of RAM installed in a computer. Swift doesn’t suffer from this problem.

Swift app development has always been a single object-oriented program that switched to structures later. With time, the data type amount and SDK classes have also gone down. That’s why all app development companies can use Swift without compromising computer memory.

Here’s one more advantage of Swift that puts it above Objective C – it can compile data much faster. How does Swift do it? Well, it leverages the LLVM or Low-Level Virtual Machine compiler for native code optimization for the operating platforms.

This feature lets developers rewrite multiple groups as structures. Conversely, Objective C has only a handful of classes that will inevitably result in reduced coding speed and increased development time.

The creators of Swift designed it using a multi-faceted language solution. This program allows app development experts to contemplate the language comprehensively and build various kinds of applications. These apps include simple, as well as complicated ones.

Apart from everything described above, Swift is the best choice for enterprise app development as it utilizes the latest features of every programming language. It even lets developers build fully-functional applications for Android devices.

It isn’t surprising if developers from all app development companies describe Objective C as obsolete. They believe that the Swift programming language holds the key to the future of mobile app development, especially enterprise mobile solutions.

Now, if you’re in search of an app development firm that always utilizes trending technologies, Moon Technolabs will be worthwhile. It’s one of the best agencies with app developers specializing in using Swift for enterprise iOS mobile app development.

What’s the latest version of Swift?
Moon Technolabs uses the latest version of Swift 5.1.4 launched on 31st January 2020. Apart from making all modules more stable, the newest version of the programming language brings more advanced systems and features.
What kind of updates did Swift bring with the latest version?
A few of the updates introduced by Swift 5.1.4 include function builders, opaque result types, and property wrappers.
Why opt for Swift?
Swift is a groundbreaking programming language that allows developers to create digital solutions for iOS, watchOS, and OS X. Apps created using Swift will run flawlessly. You won’t find anything better than this one for your enterprise app development project.

Why Does .NET MAUI Deserve Your Attention If You’re Planning To Use Xamarin? »

« An Overview Of The Architecture Of Electron.js