These Are The Top 7 Alternatives To React Native 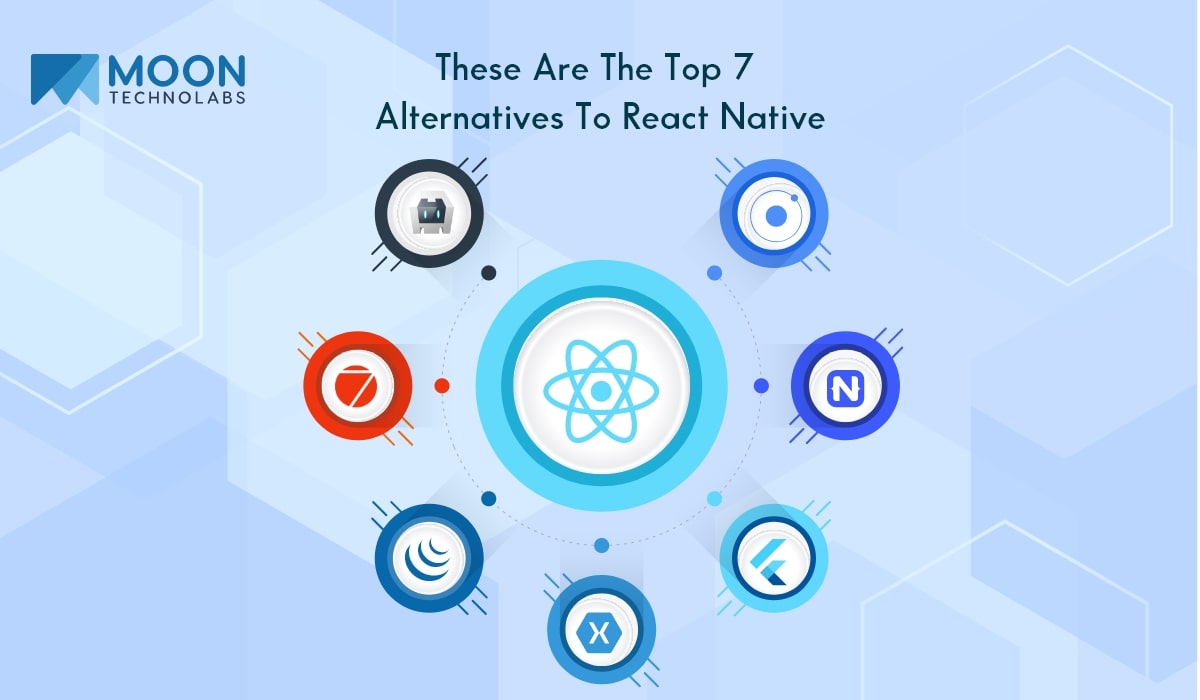 Y es, every developer out there would swear in the name of React Native. However, they’ll also tell you that the kind of project you have in mind will determine the framework, programming language, and tools you need to build it. When React Native fails to deliver what you seek, the alternatives described in this write-up will come to your rescue.

Cross-platform app development frameworks and solutions are the offspring of this ongoing technological advancement. Among all the cross-platform frameworks available these days, React Native is one of the most recognized and heavily-used. No matter how many app developers you speak to, everyone will sing praises in the name of React Native.

Why do they do it? Well, for starters, this framework lets developers share almost 70% of codebase across various platforms. React Native is the other name for cost-reduction, faster development, and simplified debugging. As it’s a product from Facebook, it always performs at its best. Then again, just like every other framework, React Native has its drawbacks.

Developers often have to deal with compatibility-related problems and the absence of custom modules. Furthermore, apps created using React Native suffer from performance issues due to its almost-native features.

If you were thinking about using React Native for your project, you must be reconsidering your choice. Your preferred app development agency will help you pick an appropriate framework. However, if you continue reading, you’ll learn about some of the best alternatives of React Native. These replacements can deliver convenient and powerful systems and features to your application.

So, what are the options you should consider? This list can make the selection process a little easier.

This one is a relatively new, open-source app development platform officially launched by Google about four years ago. Just like React Native, it lets your developers use only one codebase to create native-like applications for multiple platforms. The programming language used with it is called Dart – an object-oriented language.

It didn’t take long for Flutter to surpass React Native. Today, the former is one of the most prominent competitors of the latter.

This one shares a few similarities with React Native. For instance, both frameworks use JavaScript to create cross-platform applications for Android and iOS. NativeScript also supports Angular, TypeScript, and other related frameworks. As the name suggests, an app built using this framework will be entirely native in nature.

Another excellent alternative to React Native is Xamarin. This cross-platform tech comes from the house of Microsoft. Back in 2011, it began with Mono for Android and MonoTouch. Then, in 2016, Microsoft acquired it.

Ionic alternative for React Native lets your developers create cross-platform applications. Ionic is an open-source SDK originally fabricated on AngularJS and Apache Cordova. After some time, Ionic added support for other JavaScript frameworks, such as Vue.js, React, and Angular.

jQuery Mobile isn’t as popular as the ones explained above. Nonetheless, it allows developers to build cross-platform apps and websites. It’s an open-script JavaScript-based library that uses the features of jQuery. jQuery is quite famous, though. It’s easy to use and facilitates faster animation implementation.

Nitobi is the brand that created Apache Cordova. However, Adobe acquired it in 2011 and renamed it PhoneGap. Soon after that, Adobe published it as an open-source PhoneGap variant. This framework enables developers to create mobile apps using JavaScript, CSS, and HTML. The CLI of Apache Cordova also facilitates cross-platform development.

This one is yet another alternative to React Native that you can use for your project. This open-source HTML framework allows developers to create hybrid application for the web and mobile devices with near-native functions. Framework 7 works with both iOS and Android platforms.

In the competitive sphere of mobile app development, you’ll miss opportunities if you don’t build an app that works on several platforms. Also, React Native may not be able to support the project you have in mind. Naturally, selecting the right replacement can fulfill your requirement of maintaining a presence on worthwhile platforms, while bringing down development expenses.

Are you still wondering which technology to use? Well, Moon Technolabs can help you make the right choice. Get in touch with the agency at the earliest for further information.