The Technologies Used By Developers To Build Video Streaming Applications 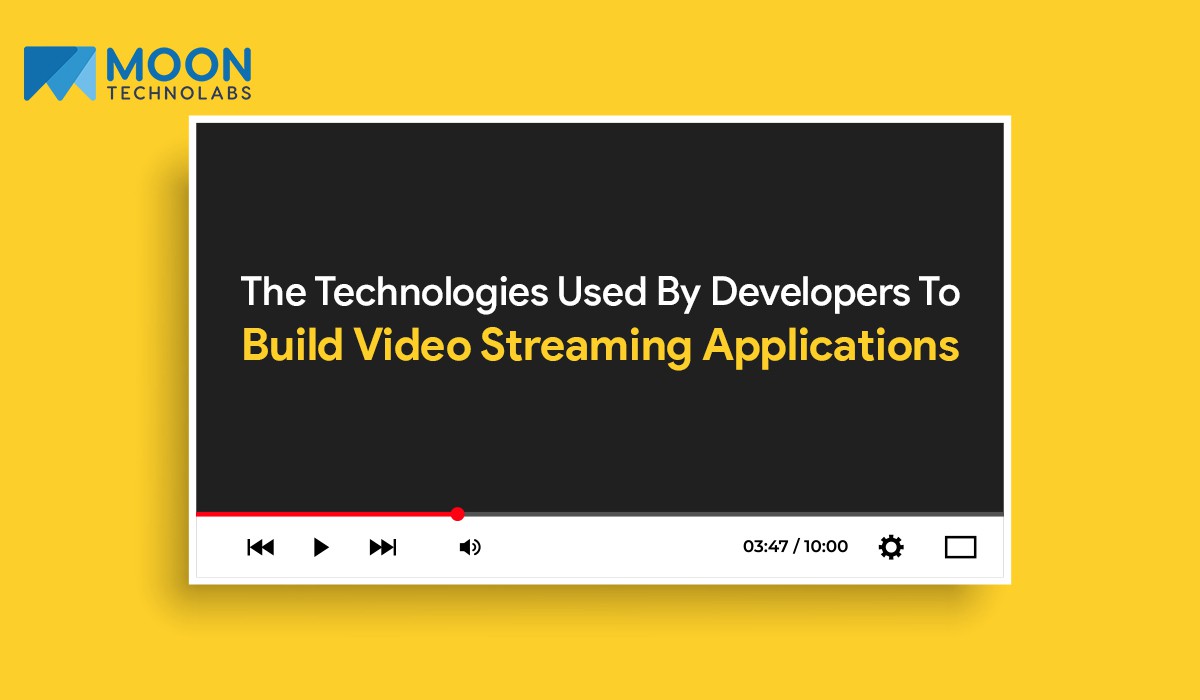 What are the tools and technologies that hide behind a video streaming app? What do you need to make your app join a billion-dollar industry? Instead of dilly-dallying, this write-up will take you into the world of the tech stacks used by developers to create applications like Netflix and the like.

Video streaming platforms and applications have been gaining a lot of popularity over the last few years, particularly between 2016 and 2018. According to reports generated by experts, the amount of time spent by the common folk on video streaming apps increase by 140%. Also, marketing experts proved that the video streaming market will earn almost $26 million in 2020. Since people had to stay indoors throughout the year due to the COVID-19 outbreak, this value increased even more, and it will continue to rise.

While you may not be aware of these exact numbers, you do know there’s enough profit to reap from this sphere. That’s why you want to get in touch with the best live video streaming mobile app development company. However, before you take that step, don’t you want to know what powers these applications? Don’t you want to find out more about the driving force of apps like Netflix? After all, you’re an entrepreneur, and you must understand what goes on behind the picture. Commoners only want entertainment, but as the provider of that entertainment, you must contemplate the best technologies that perform the magic while remaining incognito.

Instead of wasting any more time, this write-up will delve directly into the technologies that work to make applications like Netflix incredibly successful. By the end of this topic, you’ll also find out a bit about the OTT app development cost.

(1) The pipeline for data process: Applications facilitating real-time data streaming act as the medium between a user and a publisher. The only way to bestow a rewarding experience upon the user, the publisher has to eliminate lags. You can probably guess that it’s a stiff technical challenge. Just for proximity, you need to copy the original data across hundreds and thousands of servers located across the world. It’s also worth mentioning here that latency elimination isn’t the be-all-and-end-all. You require a thriving ecosystem of technologies to facilitate algorithms and data analytics to personalize such services. Data streams require processing, storage, and geographical distribution systems that are entirely fault-free. For that purpose, processing frameworks need queuing systems like Kafka and Apache. Processing frameworks, including Samza, Spark, Storm, or Flink are also necessary to nourish the data-processing pipeline and handle batch data.

(3) The programming languages: Developers use several programming languages to build video streaming applications. These include HTML, CSS, and JavaScript for web interface development and C++, Python, Ruby on Rails, and Go for backend development. You have to make sure your service provider excels in using these languages. In doing so, you will also make it certain that your app’s tech stack doesn’t become obsolete in the future.

(5) RTMP: RTMP is the abbreviated term for Real-Time Messaging Protocol. It’s a proprietary protocol that ensures the fast and smooth transmission of audio and video between servers and users.

It even allows you to embed a video stream on a third-party platform, which can be a YouTube channel or a Facebook feed.

(6) WebSocket protocol: Developers put this protocol in place so that you can handle all user actions within the different types of streaming applications. With this system, you don’t have to rely too much on server power. Instead, you can save it for stream delivery.

(7) VideoCore library: This feature allows you to enable users to include drawings and apply filters to streaming videos.

(8) Payment gateways: Finally, you’ll need some kind of a mobile payment gateway for your video streaming application. How else will you accept payment from your patrons? Whether you receive money against a product or service that you sell through the app or adhere to a paid subscription model, you’re going to need the payment gateway. It will allow users to pay using their credit/debit card or use platforms like PayPal to reimburse you directly.

It’s probably easy to guess that building an app with so many functionalities is an extremely difficult task, even for the best app developers with experience in developing them. It means there are many other things you have to know about developing such an app. For that purpose, you need to get in touch with a developer. However, this write-up won’t conclude without informing you about the OTT app development cost.

Building a medium-level application will cost you more than $170,000, according to expert surveyors. However, if you want your app to have as many features as Hulu or Twitch, you have to shell out anywhere between $200,000 and $350,000. For entrepreneurs on a tight budget, opting for MVP development is perfect. It won’t cost more than $50,000.

The values given above aren’t hard-and-fast. They can change depending on the technologies you want to use and the features you wish to include. You must reach out to an app development agency to know more.