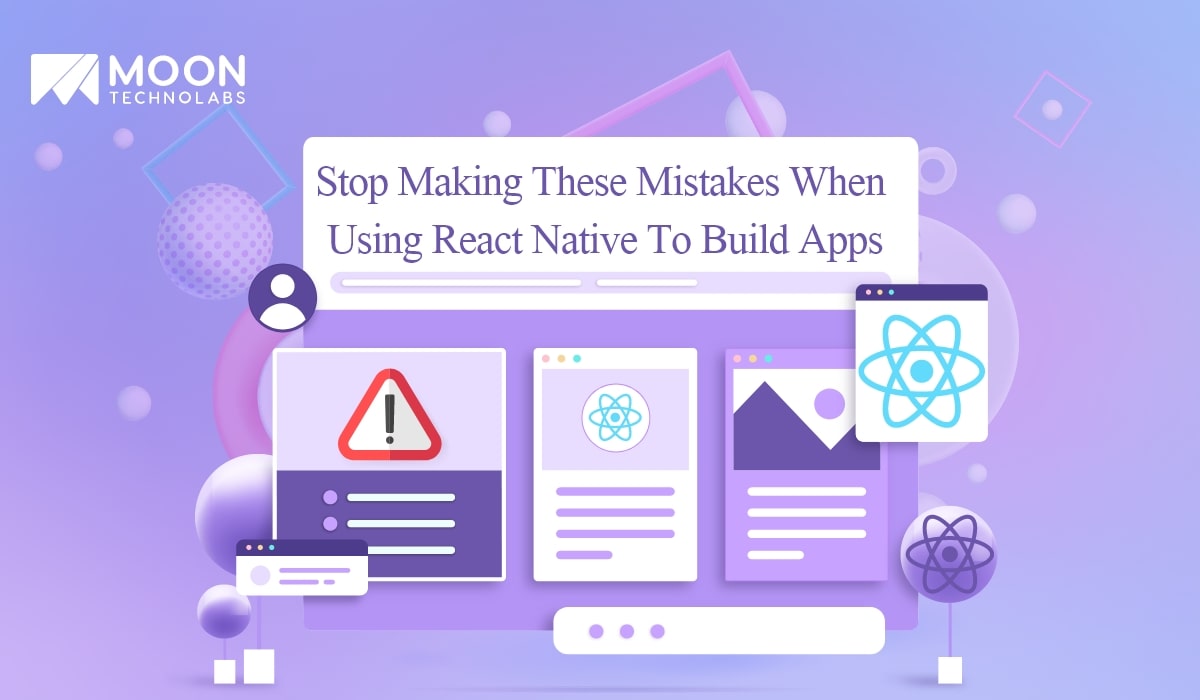 Developers of mobile apps are human beings too. Naturally, they can make mistakes. However, you can be proactive to learn about the kind of errors developers make when using React Native to build applications. With your newfound knowledge, you can correct them the moment they start sidetracking.

React Native has a lot to goad about when it comes to popularity. It has over 1.6K contributors actively making it a success. React Native is a framework with a bright past, present, and future. It never escaped the eyes of a developer attempting to earn fame in the sphere of cross-platform app development.

The popularity of React Native among app developers doesn’t seem to die down at all at any point in time. However, the industry is growing at a breakneck speed. Today, it’s at a point where developers can’t avoid comparing Native and React Native development modes.

Frequent updates to the framework to make it even more advanced are also driving the demand. Unfortunately, this demand has a limit too. In the end, at the base level, developers will have to keep learning to be able to conclude the development process of projects they receive from clients like you.

Without a thorough understanding of React Native, developers can make mistakes that will inevitably ruin the user experience. It’ll also force business owners who hire them to question their skills.

Now, your ultimate objective is to run your business smoothly and ensure it grows, survives, and thrives. You don’t have anything to do with developing an application. You simply want to bring in a react native app development company to oversee your project while you pay attention to your core business requirements.

However, if you can spare enough time to go through this write-up, you’ll learn about the mistakes app developers can make. Armed with this information, you can watch over them and even pinpoint every error to your developer team as they appear.

The love for React Native

Before delving into the details, here’s a point-by-point explanation of why developers are in love with React Native.

Whenever someone enters the world of app development, they have to start with JavaScript. It’s one of the first programming languages they learn. Naturally, when your developers use React Native, they find a significant resemblance with the subject matter.

In simple words, the dependence of React Native on JavaScript brings down the learning curve.

In that regard, the people of a react native app development company can install the framework through the Node Package Manager. If the developers of your choice have experience in JavaScript, they can install React Native within moments.

When someone says that React Native is a framework for cross-platform app development, they don’t just mean it’s for building apps for mobile devices only. By using React Native, trained and experienced developers can build digital products for smartwatches, smart TVs, VR headsets, and Windows devices.

Here’s the first problem worth mentioning in React Native. Due to the working process of JavaScript, cross-platform app developers often have to depend on native developers. It’s especially true when they have to add heavy computational systems and operations in the applications.

These apps force developers to offload the computation-related part to the native section of the application. Understandably, you’ll need the services of a react development company that also employs native developers.

1. Pinpointing bugs that your developers have to squash in the abstraction layer is a difficult task.

2. It depends heavily on third-party libraries and services.

3. It depends on implementing customized designs.

React Native has only one JavaScript thread. As a result, developers of a react development company may encounter reduced performance rates when they have to execute several processes simultaneously. This is one of the most significant limitations of React Native.

When using React Native, developers tend to get annoyed because they can’t test an app for iOS devices on anything other than Testflight of Apple. They need something better because they have to handle issues of acquiring provisioning profiles and mandatory certificates.

This problem doesn’t exist in Android, though. The process of deploying apps for Android devices is smooth and hassle-free.

Also Read : Should You Choose React Native Or Swift For iOS App Development?

Finally, this topic will take you to the primary subject of discussion – the mistakes your developers have to avoid when building apps for you on React Native.

1. Layouts for the Android and iOS versions– Despite the presence of multiple reusable components, the layouts will be different. The reality, the structure of an app’s page can be entirely different on Android and iOS.

2. Backend endpoints– If you ask your developers to create a web application, ask them to check the different endpoints offered by the backend. As they’ll have to handle the app logic, they must code everything correctly. They have to contemplate the database structure, the way the entities remain connected, etc.

3. Forms – Your app developers also have to estimate the validation layout. When they build something using React Native, they have to write more code compared to creating hybrid solutions on Cordova or something similar.

When mobile app developers receive an innovative project, they can focus on the planning aspect of the layout of the application. They won’t have to worry too much about the data-handling aspect.

Redux aids in proper data storage. It also facilitates managing the task of debugging the state of the application. If planned appropriately, it turns into a powerful tool for app data management. However, not doing it correctly will mess up a lot of things.

App development experts often try to save time by using external modules. It makes their jobs easier and faster, particularly because they have the necessary documentation.

However, the problem with these modules is that they’re prone to failure. They may not even work as per a developer’s expectations. That’s why you must ask your development team to go through the code. Request them to treat this step as one of the best practices of building apps using React Native.

All mobile app developers with experience in React Native benefit from the console log statements. They even help in debugging an app’s execution. However, problems start cropping up when developers leave the log statements within the application.

This issue can become severe in the future if your developers leave the logic and render methods inside. The asynchronous ones are more troublesome as they tend to lead to bottlenecks in JavaScript threads.

Image optimization in applications designed using React Native should be one of the top priorities of your developers. It aids in resizing the pictures locally and uploading the same to cloud storage, such as the S3 by the server and acquiring the CDN link which they can return using an API.

This process will ensure all images load faster.

Making the mistakes mentioned above will inevitably ruin the experience of a user. If you choose to hire an agency like Moon Technolabs, however, you can forget about these errors.

Moon Technolabs happens to be one of the best app development and software development companies you’ll find at the moment. It employers trained and experienced developers who have been working on React Native projects for many years.

Nevertheless, it’s beneficial for you, the client, to stay wary of these mistakes. If you work with Moon Technolabs, and if you find the developers making one or more of these mistakes, you can inform them immediately. However, such instances are rare. Do you want to rest easy at night knowing that your project is in capable hands? If so, you should choose Moon Technolabs.

What to do to improve React Native performance?
There are several ways of improving the performance standards of a React Native application. These include avoiding unnecessary rendering, choosing PureComponent over Stateless, optimizing JSON data, and reducing app size.
What makes Redux the perfect partner of React Native?
The tool called Redux aids in storing and managing data, debugging the state of an app, etc. If planned properly, it can be a powerful tool in the hands of a developer for app data management.
Should you choose React Native?
Yes, React Native is one of the best cross-platform app development frameworks out there. As long as your developers don’t make the mistakes described above, React Native will prove to be a profound choice.

Laravel 9 Is Now Out – How Is An Improvement Over Its Predecessors? »