How To Stay On-course in the Wearable App Development Market? 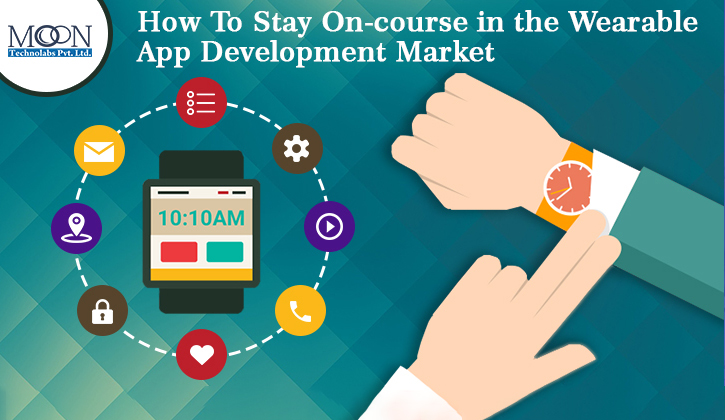 What you wear is what you flaunt! And today’s market is all about the advent of the wearables. The mobility driven consumers and the businesses who are hunting efficiency look forward to the wearable as an effective technology that can ease their daily life helping them utilize the most out of it.

Let’s take an example of the fitness tracking apps; this segment alone stands at an astonishing figure of $700 million. In an another report, it is stated that this product subset is ruling the wearable solution market with 61% market share and will increase to $12.6 billion by the year 2018.

This is a good news for any wearable app development company who is looking to enter this market for Android wear app development and Apple watch app development, the two biggest and most sought after platforms for consumers and businesses alike.

As every business wants to be effective and efficient in an era where users want to be as much “mobile” as possible the opportunities are boundless.

To take an advantage of this scenario and to stay afloat in the competition wearable app development companies will need to create some breathtaking wearable apps.

But as much as any company would like to rule this market, engineering such apps is a difficult and challenging task.

Read Also: How Secure Is the Apple Watch When it Puts Data Security Onus on Mobile Apps

Let’s take a look at the probable challenges any wearable app development company will face while developing wearable apps:

Selecting the right platform for an app is a challenge indeed. But if wearable app development companies want to stand out in the crowd and have maximum penetration then they need to develop cross platform wearable apps.

With constant changes in the wearable market and with the availability of multiple devices, companies need to focus on developing apps that work on all these devices.

The level of user interaction on wearable is slightly difference as the wearable devices have a smaller screen size as compared to tablets and smartphones.

So, if the wearable app development companies want to streamline their users’ overall experience they need to take an altogether different development approach.

To do so, developers need to emphasize on quick user interaction based on command based features because wearables generally do not have much space for stylized icons.

Read Also: Wearables and Apps are Harmful to Health ! Is It?

Data sharing feature in wearables have many benefits as these data are utilized for providing user based customized health and lifestyle details. That is the reason it gets more challenging for developing apps for the wearables as the data security becomes integral.

The dynamic nature of the wearable device industry means that there is constant upgradation happening in the field of wearables.
New devices lose their charm quickly and fade into oblivion while other devices emerge even more quickly. So, wearable app development companies must focus more on rapid app development module.

The battery life of wearables is one more constant reminder that app development companies must resolve issues pertaining to the challenges caused by the constantly draining battery issue of the wearables.

The development of wearable apps requires special considerations due to their varied functionalities. As the wearable market keeps ascending with time, wearable app development companies need to devise advanced strategies that will help them in developing efficient apps.

The Emerging Trends in Mobile Commerce 2017 »