Should You Upgrade to Mac OS X EI Capitan? 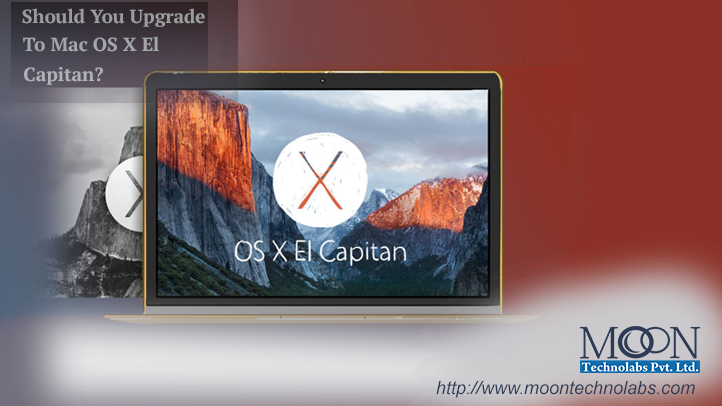 Apple announced El Capitan the latest version of its OS X operating system, 10.11, on the 9th September 2015, at the Bill Graham Civic Auditorium in San Francisco, California in the United States. A very important question at this moment is Should you upgrade to EI Capitan? As per me i would say yes, you should. But won’t recommend to rush for it. Before you rush to new upgradation, back up your Mac first, because your Mac is well within supported model range and should handle EI Capitan quite well.

Let’s check out the system requirements for EI Capitan. It’s the same one for Yosemite before it. Apple hasn’t substantially changed the hardware system requirements in some time. Macs that have more RAM can run the new upgraded operating systems and apps better. Minimum is 4 and other features like handoff will only work with the version of bluetooth found in newer Macs.

Backing up your Mac with time machine is the fastest and most foolproof way to prep it for an upgrade to EI Capitan. My recommendation would be to perform at least two backups and to test that work. Other way is SuperDuper. Dropbox is also a good option to store data.

To complete install or upgrade is a personal preference, but clean install approach would allow to ensure that OS X is running at optimal efficiency. Before you go for EI Capitan, one should perform an audit of the software that one can use on their Mac to ensure that is all compatible or not.

Is anyone looking out for new OS X EI Capitan App making? Want to get your own Mac OS X applications? Then search no where, simply go for Moon Technolabs and check out our work for Mac OS X Software development, Moon technolabs is the best Mac software development company offering complete Mac OS X development solutions for your small or large scale business needs

iBeacon Technology Revolutionizes A New Vision for the Retail Industry »

« The Influence of User Interface on App Designing