React Vs. Vue: Which Framework To Select And When? 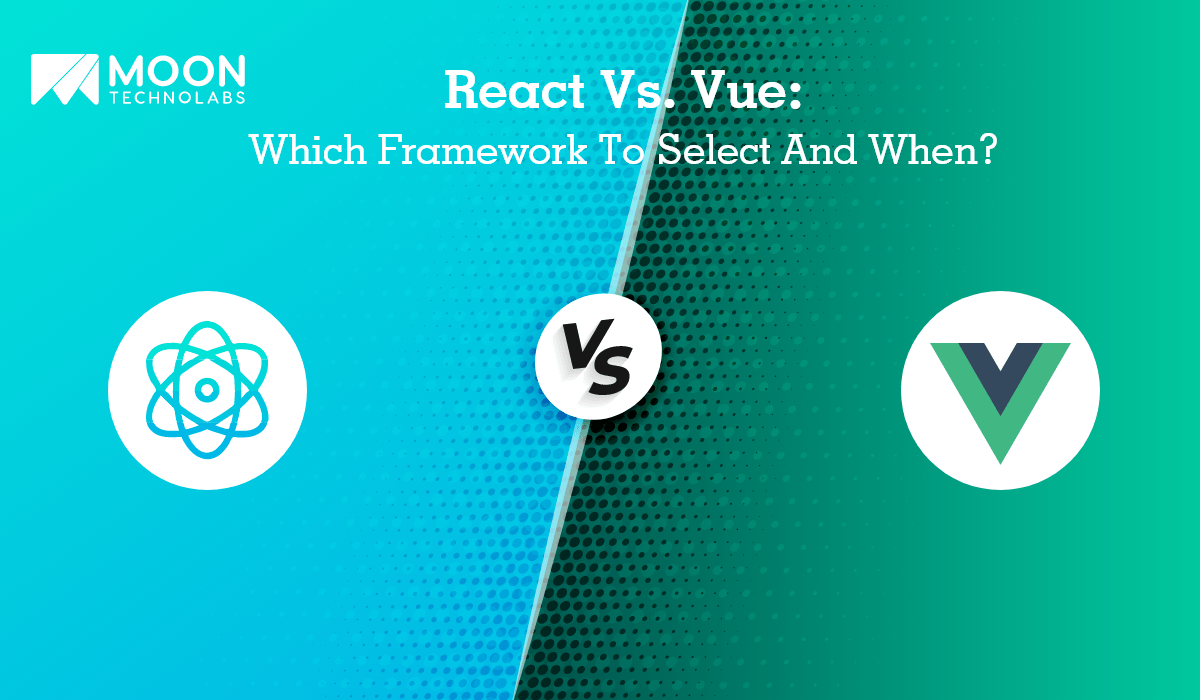 It’s possible to ascertain the differences separating React and Vue by the way their creators designed them. React depends entirely on JSX, but Vue uses both JSX and HTML.

Just like mobile applications, web apps have been in charge of the landscape of development for a long time and for all the right reasons. After all, one doesn’t need anything other than an internet browser to use a web application. The cloud functionalities of these apps sweeten the deal even further, specifically for business owners.

Naturally, hundreds and thousands of businesses from all four corners of the world want to invest in web app development services.

An explanation of React

React.js is the open-source library based on JavaScript that a react app development company uses to build web applications. This library bestows flexibility upon developers to build custom components that they can reuse. React.js also encourages developers to resort to rapid processes of development.

An explanation of Vue

Vue.js is yet another JavaScript-based framework that’s lightweight and flexible. It provides advanced tools for web app development to build modern SPAs and the front-end of web applications. Experts favor Vue.js as it lets developers change the creation in the code of an application without influencing any of the core features. 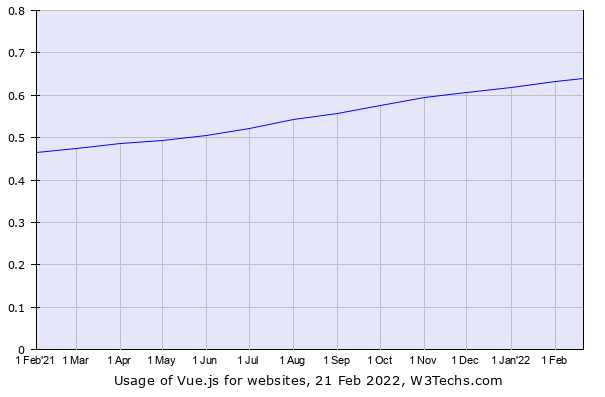 Both frameworks have specific advantages and disadvantages. Here you’ll learn about them.

Apps built using React.js can help you save time and increase the efficiency of a webpage by refreshing the UI for data updating. It also eliminates the necessity of reloading a webpage.

With separate controls and logic, developers can build reusable components. As a result, the process of development becomes simpler and faster. Additionally, component nesting gets simplified by the developers.

React.js allows developers to organize the code for optimizing in the future and increases code reusability. With faster dead-code purging, the user experience becomes better, apart from loading speed.

Developers of a react app development company have to use JSX as an extension of the syntax. React.js combines HTML and JavaScript, after all. This complexity is something only the most experienced developers can contemplate.

Developers frequently associated React.js with the newest updates on the latest versions coming from contributors spread throughout the world. Naturally, the library of JavaScript isn’t as conventional. It keeps evolving constantly.

When you choose to build an app using React.js, developers won’t be able to prioritize anything other than the view layer from the controller, view, and model architecture. They’ll have to use an extra platform for the other sections of the app.

The advantages of Vue.js

Vue.js eases the task of writing boilerplate code by incorporating the inbuilt solutions to yield state support for the management of animations and components.

Developers can manage the integration or transference of Vue.js while building components by introducing the framework into code gradually.

With every passing year, a new version of Vue.js appears, and with every version, the framework becomes faster and lighter. The optimization capability of Vue.js lets developers focus more on adding features than tweaking the code or debugging the app.

The disadvantages of Vue.js

Unlike other developer communities, the Vue.js community lacks language understandability. Vue.js enjoys more popularity in China and the surrounding areas. As a result, most of the discussions on Vue.js take place in Chinese.

Vue.js is still young as a framework. As its community is also small, the members can only handle the smallest projects. You can’t rely on them if you’re going to work on a massive project.

Despite having an all-inclusive ecosystem, Vue.js has specific limitations in terms of tools and plugins compatible with external sources and other frameworks.

You can hire react developers from Moon Technolabs or Vue.js experts based on the performance standards of both frameworks.

React.js performs faster than Vue.js. This lightweight performance ability contributes to the user experience with unique components. They work together functionally. Furthermore, the component-based architecture of this framework aids developers in building robust one-page applications.

Whenever a new feature or a component extension appears in Vue.js, the condition of the framework becomes more uncertain. The program fails to load as fast as it should. Fortunately, there’s a virtual DOM that serves as the primary tool. It helps in optimizing an app’s performance.

2. The architecture of the frameworks

Now, it’s time for you to check out the architecture of the two frameworks – React.js and Vue.js.

The architecture supported by React.js

As opposed to other frameworks and libraries, React.js doesn’t have an inbuilt architecture pattern. It takes care of the view layer or app created using components. These components of React.js work just like the functions rendering the underlying UI when the data changes.

The architecture supported by Vue.js

Vue.js prioritized following the ViewModel approach and oversees the pattern on MVVM, particularly in the development of large-scale applications. There’s a connection between the Model and View parts in a two-way binding approach. MVVM is the abbreviated term for Model, View, and ViewModel.

If you hire react developers instead of Vue.js experts or the other way around, which one will facilitate better app testing?

Ease of testing apps on React.js

React.js has all the crucial test runners. With the aid of tools like these, the development process will be easy enough for developers to follow. For instance, test runners like Mocha, Jest, and others help in practicing a standard method of test suite execution. It aids testers in identifying the problems in unnecessary functions, real browser environments, etc.

Ease of testing apps on Vue.js

As already mentioned earlier, Vue.js is a relatively new entrant in the field of web app frameworks. However, it boasts incredible testing abilities. Yes, they’re somewhat straightforward and ordinary but surprisingly efficient. It can’t offer luxurious tools, but it doesn’t undervalue the test capacity of code, either.

Also Read: Comparisons: React Native vs. Flutter vs. Ionic vs. Xamarin vs. NativeScript

A web app has to be scalable to be able to grow with the business. Naturally, you have to know which one can deliver better scalability.

Bits of JavaScript form the building blocks of React.js applications. Understandably, developers have to resort to conventional methods of organizing code to add scalability to the project.

Being a lightweight framework, developers prefer using Vue.js when they have to work on small-time applications. Unfortunately, these apps won’t be scalable, even if your development team extends the app with the flexible tools of Vue.js. However, it’s possible to achieve scalability. The process is a bit too complex to describe here, though.

Will you be able to build a complex application with react app development services offered by Moon Technolabs? Or, do you have to go with Vue.js?

React.js is powerful enough to facilitate building exceptionally interactive single-page applications. Additionally, it delivers support from external server-side architecture of renderings, such as Flux, Redux, and SSR frameworks, such as Next.js.

When it’s about developing complex web solutions, it can be a challenge. It’s also where the coding aspect gets a little serious. If you want to use Vue.js to build a complicated web app, you’ll need code that can connect all the underlying components. The issue with Vue.js is that it’s difficult for developers to standardize component orders.

So, what do you think? Will you go for react app development services or use Vue.js? Both solutions use JavaScript and both frameworks have a few interesting use cases to display. Even the best developers won’t be able to tell you which one is better. Therefore, you need to pick one based on your specific project.

For example, the following aspects will work better if you choose React.js.

Vue.js will be more suitable if you wish to do the following.

If you have more questions, experts from companies like Moon Technolabs can provide you with the information you seek.

Which one delivers a better user experience?
React.js is better than Vue.js because of its high-quality UI and superfast rendering of web pages. History proves that the applications created using React.js attract more users.
Which one lets you develop applications faster?
In this particular aspect, Vue.js wins over React.js because of its lightweight nature and several other features.
What about the learning curve?
Contemplating the intricacies of React.js shouldn’t be a problem for someone with experience in JavaScript. However, Vue.js is the easiest one to learn and understand among all the JavaScript frameworks.

How To Add AR Effects To An Android App Using VrFace Library? »

« How Will The AR/VR Adoption In 2022 Change The Game Of Industry?