Protect Your Business App Idea By Patenting It First 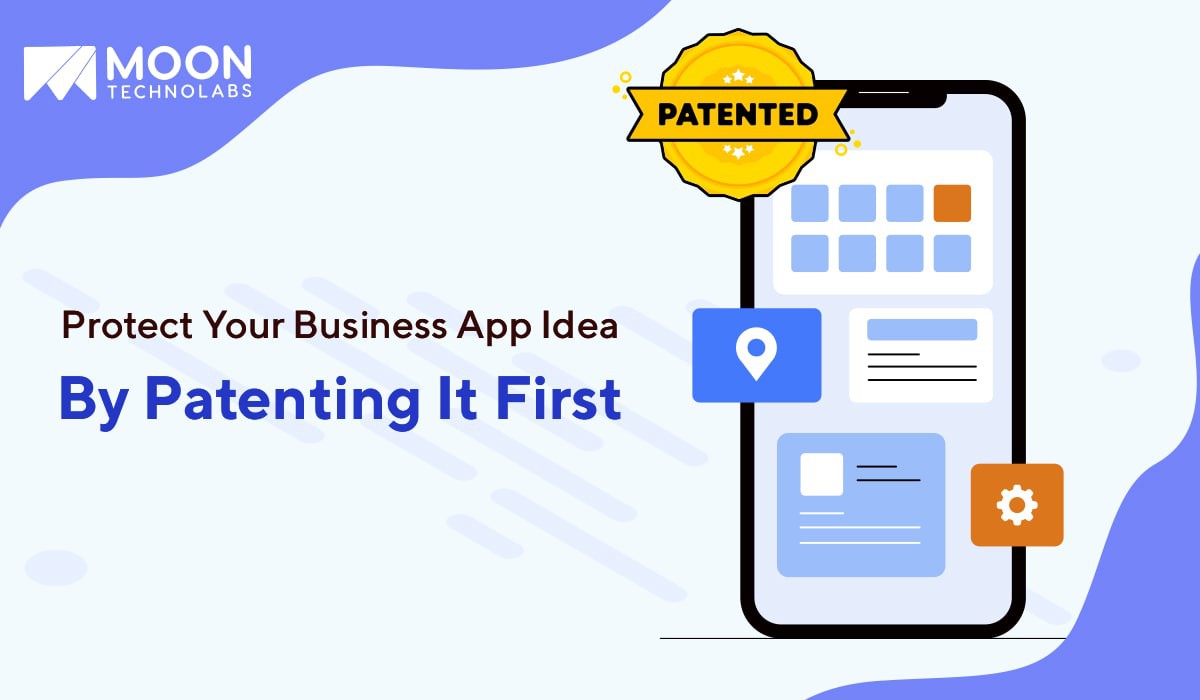 A lot of people come up with unique app ideas these days. Some of those folks can’t convert their dream into reality due to the lack of funds. Others forget to patent their idea to ensure no one steals it. If you have an idea, you should get it patented at the earliest, and this topic will tell you how to do it.

So, you have a unique mobile idea in your mind that doesn’t let you sleep at night. Well, it’s something worth congratulating you about. It’s also assumable that you’re serious about converting your idea into a reality.

However, you’re probably thinking about what to do to prevent someone else from stealing your idea and claim it as their own. Fortunately, you can protect your app idea with intellectual property law that includes patent, trademark, and mobile app copyrights. Many entrepreneurs who consider getting their app idea patented prevent others from building, using, or selling it.

Even the most reliable mobile app development company will suggest patenting your idea at the earliest to stop copycats from stealing it. Just make sure that the idea is novel enough to be applicable for patent law. You can’t apply for a patent if your idea is nothing but a clone of one of the millions of apps available today.

There are a few general considerations that you need to pay attention to, especially if you never patented anything before.

Some folks don’t know what patenting means in concrete terms. It’s nothing but a form of intellectual property law that will prevent other people from using your idea without your permission. A patent gives you the exclusive right to remove others from the scene. You’ll be the only one who will develop the idea with the support of the most reliable mobile app development company. You’ll also have the express right to sell your idea. The residents of the US have to approach the United States Patent and Trademark Office for patent issuance, while Canadians have to go to the Canadian Intellectual Property Office.

Even if you know a thing or two about patenting, you’ll probably be sceptical at the beginning about getting an app idea patented because you think it isn’t possible. In reality, everyone has the right to apply for a patent to secure their app idea. As long as it’s a component with various methods of interaction, you can patent it. However, the app code isn’t something you can patent as it comes under the law category covered by copyrights. Nevertheless, patenting is an option as long as you aim to secure the process or method of an application that it follows to perform a specific action. Apart from that, you need to find out whether your app idea belongs to a specific category or not, and you have to know it before you file a patent.

Usually, three key points determine the eligibility of an app idea for patenting. Before you look for the top mobile app development companies, you need to understand and fulfil the following requirements:

It’s better to take your time before approaching one of the top mobile app development companies. After all, you’ll need it to ascertain whether someone else got the same idea patented already or not. Therefore, you should look into every existing and pending idea waiting to get patented. The USPTO suggests performing an advanced search to seek out similar items using the Cooperative Patent Classification system. In the USA, at least, the USPTO gives people access to its database for this purpose. The organization maintains all the published and pending patents in this database.

In today’s day and age, a patent doesn’t go to the person who comes up with the idea. It goes to the individual who first applies for a patent against it. It’s one of the primary reasons why entrepreneurs and startups opt for a provisional application before disclosing crucial details to the public.

Once you prepare the application, you need to present it to the USPTO. Due to the sheer amount of paperwork associated with the process, things will become tedious with time because the organization will verify each document before finalizing the process. Here’s a list of all the documents you’ll need.

7. The cost of patenting

Usually, the expenses associated with patenting will differ based on the type of patent you apply for. For provisional patents, you have to pay somewhere between $2,000 and $5,000. After filing a provisional application, you can hire dedicated mobile app developers for your project. Just remember that a provisional patent lasts only one year.

Non-provisional patents, on the other hand, will require you to spend anywhere between $10,000 and $15,000. Once you file the patent, the USPTO will examine it. This process can take one to three years to complete as the examiner will review your application thoroughly to ascertain its eligibility.

Before wrapping things up, this write-up will provide you with an explanation of the different types of patent applications. Depending on the type of patenting you opt for, you will decide when to hire dedicated mobile app developers.

You probably know a thing or two about provisional patenting if you’ve been reading this from the beginning. It’s the most common patenting variant, especially when it comes to app ideas. Most entrepreneurs turn to this option when starting the patenting process. With this option, you can file a patent without a formal claim, declaration, or any other statement containing information disclosure. These are the benefits of this option.

Applicants can file a non-provisional patent for an app idea without claiming priority made in convention nations or without referencing an app already getting processed at the office. However, such an application requires you to provide an all-inclusive specification and claims. Non-provisional applications should contain info information, such as a written description of the idea. It must also have at least one claim to ascertain the limitations of the idea legally. Things may get a little confusing as to the one you should choose. If that happens, you should consider asking the following questions to yourself.

The entire patenting process can be challenging to deal with, but if you resort to the services of an experienced patent attorney specializing in software solutions, he/she should be able to tell you whether you’ll benefit from patent protection at all or not. Such a specialist can even support your patenting venture. Now that you’ve gone through this write-up, the process of patenting should be relatively clear to you. The only thing you need to do now is to seek out a reputable app development firm that can deftly convert your idea into a reality. If you have any queries concerning the development process, you can speak to a representative of the agency of your choice. App development agencies can also tell you whether your idea is unique at all or not.

Which Version Of Laravel Can Facilitate Faster Development? »