Node.js Vs. Python: Which One Is Better For Your Project? 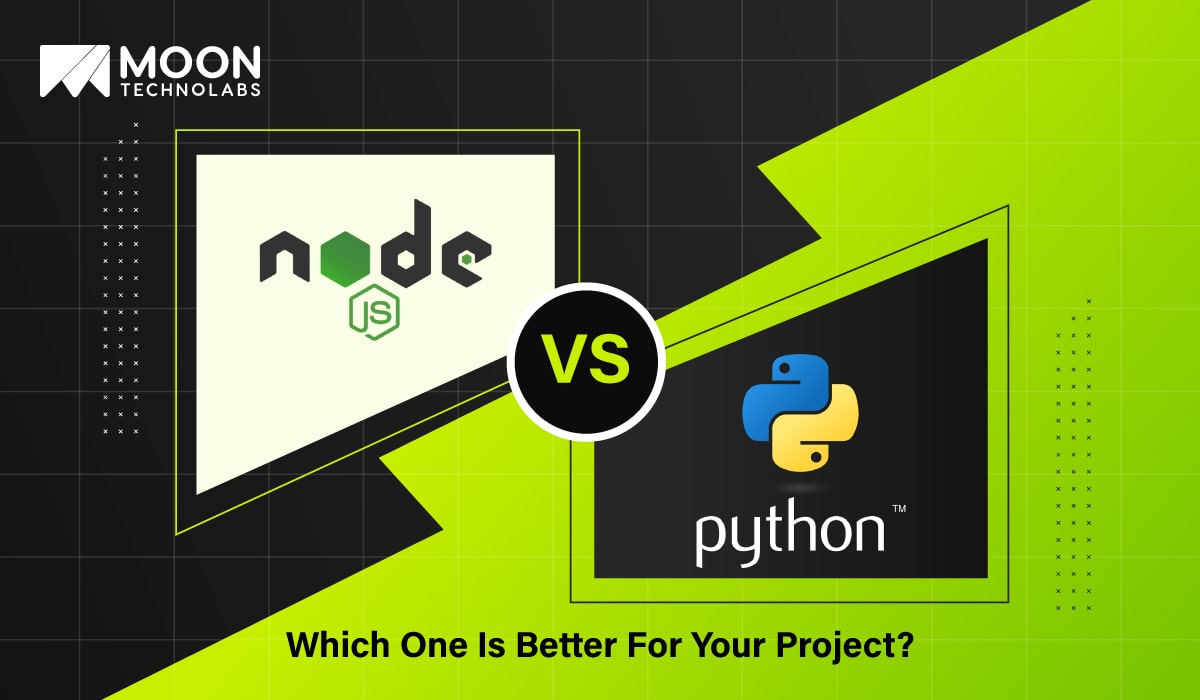 Are you wondering how you should select the right programming language for the project you’re about to start? It’s one of the most challenging decisions business owners and developers have to make. So, if you’re thinking about going with Node.js or Python, this topic can help you choose.

Selecting the appropriate programming language when starting a new project can be one of the most challenging decisions for developers, as well as the business owners hiring them.

The main cause of this issue is that every project brings unique problems. Also, in the sphere of programming, no one can be the “Jack of all trades.” Every programming language has its exclusive advantages and disadvantages. These pros and cons make them suitable for specific situations and unsuitable for others.

So, if you’re thinking about working with a node.js app development company, you have to find out whether Node.js is right for your project or not. You have to do the same thing if you’re planning to use Python. This topic will compare both programming languages and help you contemplate which programming language works and which one fails based on the situation.

Primarily used by developers as a backend framework, Node.js is a runtime environment of JavaScript created on the V8 JavaScript engine of Google Chrome. This high-performance engine enriches the efficiency of the code of Node.js.

Fabricated by Ryan Dahl, Node.js can help you build scalable and efficient web apps running on JavaScript. Your developers can use Node.js for both front-end and back-end development.

Most businesses prefer hiring Python developers instead of a node.js app development company for all the right reasons. On GitHub, Python enjoys the privilege of being the second-most popular programming language. It’s also the best language to use for Machine Learning.

Developers turn to Python to create apps for the web, desktop computers, and mobile devices, and it comes with an all-inclusive collection of libraries and packages that can ease the task of development.

The convenience offered by Python makes it an excellent option for backend development. That’s why it’s one of the top programming languages of today.

Guido van Rossum, the creator of Python, once described this programming language in his refined words.

“To enjoy coding on Python to the fullest, one must see short, concise, and readable classes that can express a lot of action without increasing the volume of the code. No one should use it in terms of trivial code as it can bore the reader to sleep.”

Even with all these profound features, you may need to hire node.js developers instead of Python developers. Then again, you can’t make the right choice without comparing the two.

When it comes to performance, Python is a bit slower because it has to process requests in one flow. Node.js, on the other hand, facilitates advanced multithreading. Developers may consider using Django to manage high loads, but this strategy works only to a specific extent.

Therefore, in terms of speed and performance, Node.js should be your choice. Also, it’ll benefit you if you develop real-time web-based systems where you have to generate and share mission-critical updates. Additionally, because of these optimizations, Node.js reduces the loading time of an application.

In this age of smart technologies, developers resort to Python to work on tech trends, such as Machine Learning, IoT, and Data Science. When it comes to ML, developers have access to numerous libraries and tools, along worth community experts.

Developers also have MicroPython, a smaller variant of Python that facilitates building apps for IoT gadgets.

This one allows developers to create solutions for IoT devices, but it’s much more popular for building web apps powered by real-time communications. More and more developers use Node.js as a server-side framework because of the popularity of JavaScript.

Python lacks inbuilt support for asynchronous programming and needs exclusive tools to start this functionality. One of these libraries includes asyncio, which a developer can use to build event-driven asynchronous applications.

The architecture of Node.js incorporates a single-thread event loop. When combined with the non-blocking feature of Node.js, it facilitates handling thousands of concurrent connections without encountering thread context switching. If you want to leverage this feature, should hire node.js developers from Moon Technolabs.

The syntax of Python makes it possible for developers to write just a few lines of code to create something powerful and feature-laden. Python doesn’t have those curly brackets, which makes things easier for developers to understand and debug applications.

With just a little bit of technical knowledge, most people can read code written in Python. That’s why this programming language is perfect for first-time programmers.

The syntax of Node.js is quite similar to the syntax of the JavaScript browser. If your developers have knowledge in using JavaScript, they shouldn’t have any challenge in operating Node.js.

Python is suitable for both the backend and front-end of cross-platform development. It comes with Linux and macOS bundled together. Your developers can use Python for desktop and web development, but it won’t be a suitable choice for mobile app development.

Just like Python, Node.js can facilitate backend and front-end development of web apps. In other words, it allows developers to use JavaScript on both ends consistently. With Node.js, developers can build various cross-platform apps that’ll work on mobile, web, the cloud, and IoT while reducing development efforts and expenses.

Python isn’t scalable enough due to several reasons. This programming language is slower because of its runtime interpretation of code. Also, Python lacks multithreading support as an internal lock system stops it from performing multiple tasks simultaneously.

It’s possible to overcome these limitations, though. To do that, your developers have to use implementations of Python, such as Jython or CPython, load balancing systems, and better architectures.

In terms of scalability, Node.js delivers what you seek as its creators designed the runtime environment into it. Node.js also comes with a cluster module capable of handling the power held by your machine.

Also Read : Laravel Vs. Node.js: War For The Backend

If you work with the top python app development agency out there, you can expect the developers there to extend this programming language with several frameworks including Flask, Django, web2py, and others for full-stack and web-only projects.

Python can also extend the features of the C++/C programming language with an API provided by a C source file. By implementing Python with Java, you get Jython that can simplify scripting and also enable swift app development with relative ease.

Node.js brings with it an entire collection of frameworks capable of increasing the boundaries of its features. Some of them include DerbyJS, Hapi.js, Loopback.js, and Koa.js.

If you work with the top python app development agency, the developers there will be able to pinpoint and debug errors as they pop up because of its compact and readable syntax. Python is also better at handling exceptions than other programming languages. This feature gives it an edge against Node.js.

If you work with Node.js specialists instead of Python experts, you won’t have to worry about error handling. Errors can pop up at any point in time during the lifecycle of an application. Node.js is equally capable of managing errors and brings several error-handling options.

From everything described above, it should be clear to you that both Node.js and Python are extremely powerful options for business owners and programmers to build web applications.

When you have to select one, you should compare these two programming languages based on two main factors – the purpose of your project and the skill of the development team.

Both programming languages possess specific perks. At times, one programming language’s advantages surpass the others for your specific project. Just make sure that they don’t outweigh the needs of your project because there’s always another route that you can take to overcome the shortcomings.

Additionally, it lets you know how comfortably your team can work on the project. So, if you’re ready to take the next step, consider contacting a company like Moon Technolabs.

What makes Python worthwhile?
One of the main reasons behind the immense popularity of Python is that a business owner will never have trouble finding talented developers mostly due to the uncomplicatedness of the syntax.
What makes Node.js worthwhile?
The runtime of Node.js makes it perfect for applications in need of a persistent connection between the server and browser-side application.
Which brands use these programming languages?
Brands like Google, Reddit, Spotify, and Dropbox use Python. On the other hand, Node.js facilitated the development of projects for brands like Netflix, LinkedIn, PayPal, and Trello.

Understanding Metaverse Through Virtual Reality In 2022 »