Laravel Vs CodeIgniter: Which One is Better After Release of PHP 8? 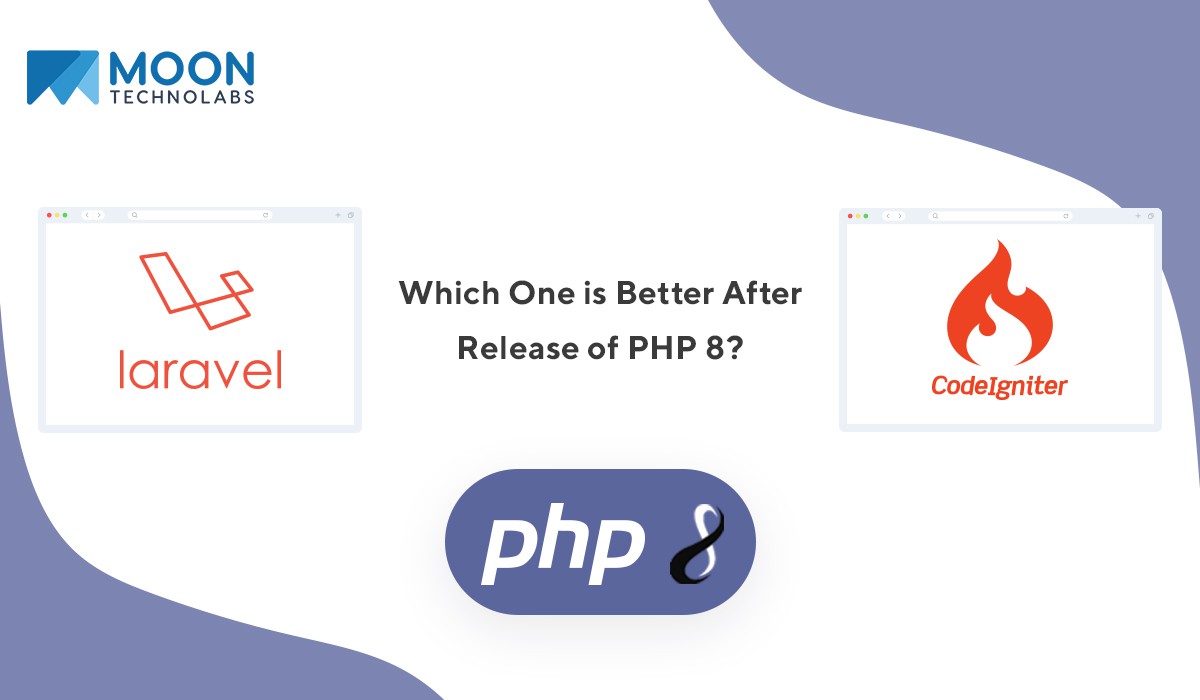 CodeIgniter and Laravel are two PHP-based highly renowned frameworks used by developers for projects concerning web development. While both of them are reliable and fast, differences do exist between the two, and you must learn about them.

The developers of today usually have to build elaborate websites and web apps. You’re planning to hire CodeIgniter developers or Laravel developers for one such project. You and everyone else may think that working on such projects is nothing more than a routine exercise for these web development specialists. However, in reality, after introducing a specific level of complexity, designing sites and developing apps can turn into an inconvenience. They have to spend way too much time on their projects. Such a situation led to the creation of a structured development method incorporating PHP-based frameworks.

Now, if it’s about PHP, then developers, as well as their clients often have to face one challenging question: what should be the best structure? Developers must select something perfectly suited for the requirements of the project. Otherwise, their choice will harm the very foundation of the web application or website. Of course, they have a lot of choices to explore, but they often end up picking either Laravel or CodeIgniter. If you wish to hire Laravel developers, you may not bother to acquire information on CodeIgniter. As a client searching for web development specialists, you can’t make uninformed decisions. That’s why you have to go through this write-up thoroughly.

The Release of PHP 8

It’s worth mentioning here that a new version of PHP, PHP 8.0 arrived on 26th November 2020. It brought significantly new features and optimizations to the language, including union types, named arguments, null safe operator, attributes, match expression, constructor property promotion, JIT, weak maps, and enhancements in the type system, constancy, and error handling. If you continue reading, you’ll learn more about how the latest PHP release impacted the two frameworks, apart from the differences separating them. After the release of PHP 8, more businesses are wanting to hire Laravel developers.

It’s better to start with this robust PHP framework. You shouldn’t make the mistake of believing that CodeIgniter isn’t as effective as Laravel. It’s a straightforward toolkit, which allows developers to create high-quality and feature-rich dynamic websites and equally powerful web applications. It gives ultimate freedom to the users as well. After all, they won’t have to depend on an MVC development pattern. The story doesn’t end here, though. CodeIgniter lets developers use plugins from third parties. These plugins always come in handy when implementing complicated features and functionalities in the product.

After the release of PHP 8, developers found several multi-type parameters in their projects. It isn’t clear, as of yet, whether they need to upgrade to the current version directly or recreate a new version of CodeIgniter for transformation. At the moment PHP experts from several corners of the world believe that incorporating multi-type functions will affect backward compatibility with PHP 7. It may not even be available in the future.

So, why should you choose CodeIgniter over Laravel? You should opt for the former because the developers will be able to make use of the support provided by this framework’s active community. The members of this community respond to queries almost instantly. Furthermore, it allows developers to cache the websites and facilitate enhanced performance and improved loading times.

Even if you’re hell-bent to hire Laravel developers, you must know a few things about it. It’s an open-source PHP-based framework that facilitates web app development through the architectural pattern of MVC. The creators released Laravel under the license acquired from MIT. GitHub, on the other hand, hosts the source code.

For Laravel, once PHP 8 made its grand appearance, the community started working hard to provide support to all the libraries. They are doing their best for individual developers and specialists working with development agencies to make the transition as easy as possible. Developers only need to make sure that they’re using Laravel 6, 7, or 8 to receive PHP 8 support. They must also use the latest versions of the first-party packages from Laravel, such as Cashier, Passport, Dusk, and the like.

So, why should you hire a laravel development team? It has a version-control system, which allows developers to streamline the management of migrations. It also offers a composer-based dependency manager, along with modular packaging. Other than supporting Eloquent ORM, which is an enhanced ActiveRecord implementation used in working with DB, it sustains several DBMS platforms. These include SQLServer, PostgreSQL, and MySQL. Furthermore, Laravel boasts of an automated loading feature. It means the developers won’t have to depend on manual maintenance measures or inclusion paths. The framework even lets them incorporate limitations between several DBM objects via an augmented query-builder mechanism. With Laravel, developers can create various tools while receiving assistance from a LOC container. It also comes with superb documentation.

Now, it’s time to return to your question. Which one should you go for – Laravel or CodeIgniter? The truth is that both of them are superb PHP frameworks. Both have their unique benefits and advantages. Yes, the requirements of the project will dictate your choice. However, master developers from across the globe believe that Laravel is better than CodeIgniter. Additionally, after the launch of PHP 8, most of the features of the latest version of the language are available on Laravel. CodeIgniter needs more time before it incorporates the specialities of PHP 8. That’s why more enterprises are looking to hire CodeIgniter developers. And those who like less complexity decide to hire Laravel developers.

You’re probably thinking right now that you made the right decision before you even read this topic. However, you shouldn’t forget that the choice of the framework depends entirely on the project and its unique requirements. While Laravel is an excellent choice, ultimately, your development partners will decide whether they can complete the project with it. If not, they have to resort to CodeIgniter or something else.

With the appropriate development services and the unique features of the framework, the development agency that you choose to work with can create high-quality websites and web-based applications for your business. PHP developers have to evaluate the project thoroughly to determine which framework will be perfect for it. So, it doesn’t matter whether you hire Laravel developers or hire CodeIgniter developers – the only thing you need to think about is the mobile app development company you go for. You should stay in touch with them to keep abreast of the project’s progress. In doing so, you will know whether they’re going to use CodeIgniter instead of Laravel or something else you aren’t aware of. They will elucidate why they can’t adhere to your preferences regarding the framework. So, start searching for the best Laravel and CodeIgniter developers at the earliest.

Kotlin Vs Flutter: Battle For The Cross-Platform App Development Throne »