Kotlin Vs Flutter: Battle For The Cross-Platform App Development Throne 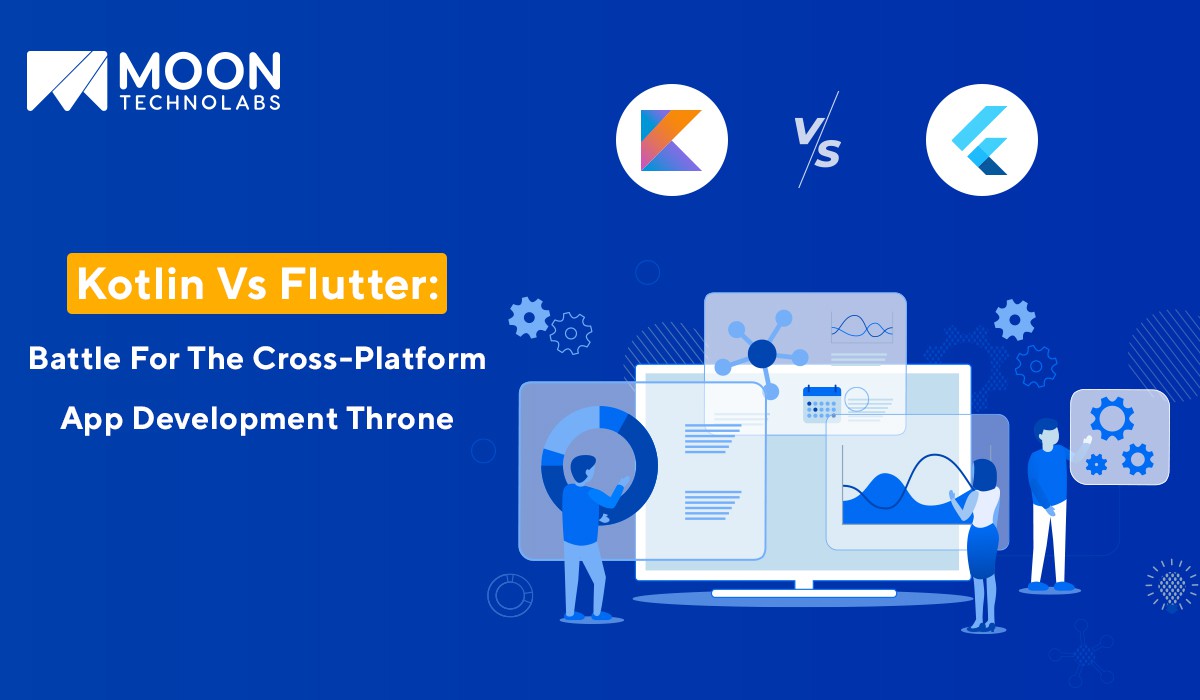 It’s going to be a bit weird because this topic will try to establish the differences between Kotlin and Flutter. After all, the former is a programming language, while the latter is a framework best for UI development. Nevertheless, these two giants are waging a war against each other in an attempt to steal the crown of cross-platform app development. How will you choose the right one for your project?

It goes without saying that the livelihood of humans depends on apps these days. A regular person, in today’s day and age, uses various applications from the moment he/she wakes up to the moment he/she goes back to bed. According to market researchers, the average American spends around three hours and a quarter of another on mobile devices.

In the world of app development, the section that prioritizes cross-platform app building has been growing immensely fast, especially after the arrival of several operating systems, such as Android, iOS, and Windows. At the moment, building applications that work on all platforms is one of the norms followed by the industry.

With cross-platform app development, developers get to use one code to create several applications. Statistical data indicates that Android and iOS together hold almost 98% of the entire mobile OS sector.

As you can see, cross-platform applications reach a more densely populated market at a significantly low deployment cost.

There was a time when a flutter app development company in India had to resort to React Native and Flutter after the latter arrived. However, Kotlin popped up some time ago. Right now, it’s an immensely powerful programming language that can ease the tasks of app developers.

When business owners like you have to decide whether to side with Kotlin or Flutter, it’s natural to feel confused and overwhelmed. This topic aims to describe the two and the differences that separate them.

Once it arrived, Kotlin didn’t take long to become one of the most highly preferred languages. In reality, many app developers went as far as to say that it’s second to Java. Google is backing the platform, and app developers explicitly use it for Android projects. Experts say that more than 82,000 applications out there are running on Kotlin. It holds a market share of almost 10% among apps and more than 22% of downloads. JetBrains is the designer of Kotlin, a language that utilizes Java Virtual Machine and bridges the gap with exclusive functional pieces. All-in-all, Kotlin provides new functionalities concerning development.

Flutter earned a lot of fame soon after its launch back in 2015. Specialists in the field of app development and market research say that it accounts for 0.07% of downloads and 0.24% of the market. This framework is an open-source SDK that enables developers to create applications for mobile, web, and desktop. They get to use a single codebase, and they also manage to build apps that look and feel native. Flutter managed to become the top contender for the cross-platform app development market due to Google’s insights concerning the technical and market-related challenges that the industry is facing right now. Flutter’s UI system became a superb solution for all the hurdles.

(1) Performance standards: Flutter, since the beginning, has been delivering hot reloading functionality to its users. This feature translates to high-quality reloading systems which make it convenient for developers to introduce specific alterations in the backend. At the same time, they can view the differences that appear due to the modifications in the frontend. Kotlin, on the other hand, compiles the code in the same way as the platform that the developer is using. It allows for enhanced and customized performance.

(2) The experience with the UI: App developers that customize flutter app development services receive support from various widgets. They aid in building customized and effective solutions. Kotlin, however, doesn’t need to follow specific instructions. It bestows liberty upon the UI developer to design an app without bothering about any of the restrictions.

(3) The language: Flutter alone is nothing more than a UI app development platform. Developers have to combine Dart with it to create applications from scratch. Dart is a programming language introduced by Google. Despite remaining relatively low-key, Dart is quite efficient, but Kotlin is a programming language. It’s just like Java or any other popular programming language that you can think of. In reality, the creators of Kotlin made it in a way so that a developer can interoperate it with Java.

(4) Price and testing: Both Flutter and Kotlin are open-source solutions that the developers can use without spending a dime. Naturally, there’s nothing better than these two. However, the testing support is different for each. Flutter can offer a massive range of testing systems, along with an exclusive widget-testing feature. Kotlin prioritizes backend development services and uses Firebase to offer secure backend options.

Indeed, it’s somewhat challenging to decide who wins the game. Both have unique specialties and drawbacks. It does appear that Kotlin is a bit ahead of Flutter, especially in terms of usage and market share, but everything boils down to your project and its requirements.

« Laravel Vs CodeIgniter: Which One is Better After Release of PHP 8?