Know the complete facts behind PHP and its resurgence 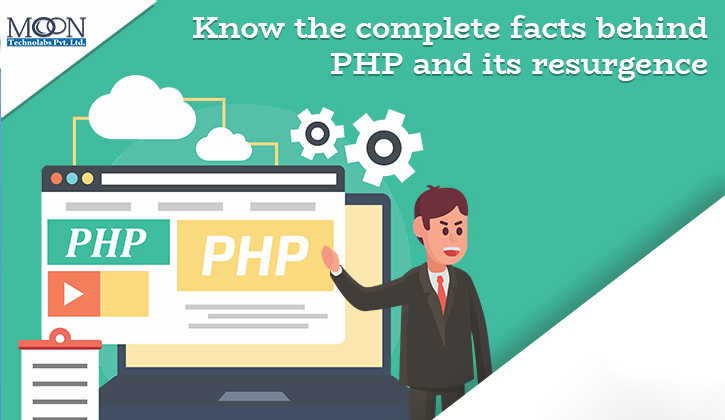 Will PHP survive 2017?”. This is one question that is doing the rounds in the developer community and in the businesses who have built their Apps and sites on it. But, what is PHP in the first place, and why is PHP development so significant?

Designed by Mr Rasmus Lerdorf in 1995, PHP has been having a successful run for many decades and is currently 7 versions old. It is one of the most famous and widely used programming languages that even Facebook was built on PHP codes. It was adopted warmly by other Tech giants like Wiki, Tumblr, WordPress and Flickr, when they set up shop.

Like any other tech marvel, there is a buzz going on in the tech circles that PHP is losing popularity and may soon become extinct.

PHP does seem to be having some issues. Though it is a robust and compatible programming language, PHP is considered to be too flexible with the structure and syntax, which can be a big drawback. While this makes it easier for new programmers to easily learn and pick it up, it also makes it difficult to optimise it. It also leads to the creation of loosely structured codes that make bug fixing complicated. 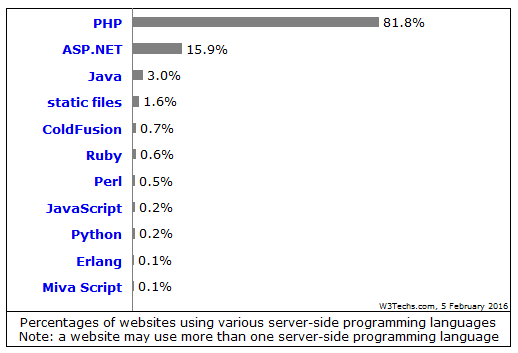 As of 2016, PHP is running on more than 80% websites on the net. In this scenario, the above-described issues will create nightmares for the Enterprises whose sites and Apps are built on PHP Development.

With such drawbacks, it is inevitable that Enterprises shift to other new languages like ColdFusion, Python, Ruby on Rails, so as to avoid potential pitfalls.

Back with a Bang

In response to the changing market trends, PHP has come up with its latest version – PHP 7. And this is compensating the drawbacks such as designs and class groupings and is placing PHP in a competitive spot with other contenders.

According to TIOBE index, which describes the popularity of a programming language, this is how PHP stands out. 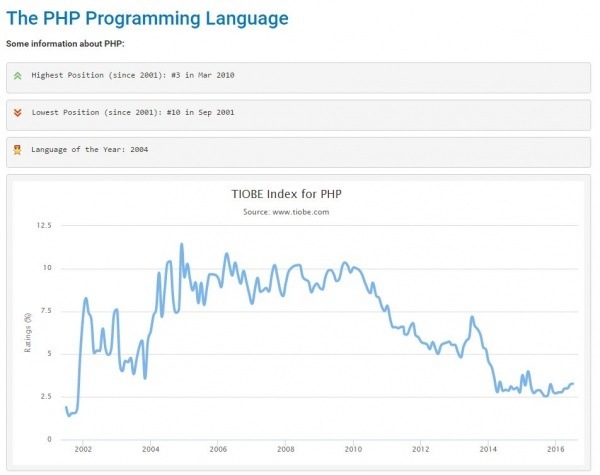 It is pretty clear from the above graph that PHPs popularity and usage took a dip a few years back, but with the release of its latest version PHP 7, it is slowly and steadily climbing up the chart again.

What do the numbers say? 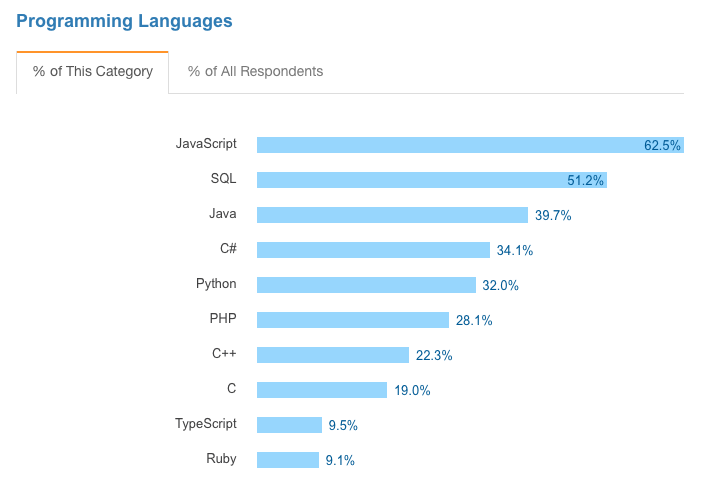 Stack Overflow recently conducted a survey covering more than 64,000 developers, as to the most preferred programming language, the demographics, the geography, Developer profile and roles, Experience, etc.

It is clear that PHP still manages to grab a very decent 6th position in the list of Programming languages as the most preferred by the developers, with around 28% of them opting for it.

In the trend that shows how different programming languages are doing over time, it is evident that C and C# have gone down on their usage, whereas languages like Node.JS and Python are emerging as the new favourites. In all this, PHP seems to have a rather steady following.

The PHP developer community also seems to have a steady demand curve, with more than 33.8% of them working as Web Developers, around 38% of them as SysAdmin or DevOps, and around 25% of them as Data Scientists.

The future of PHP Frameworks 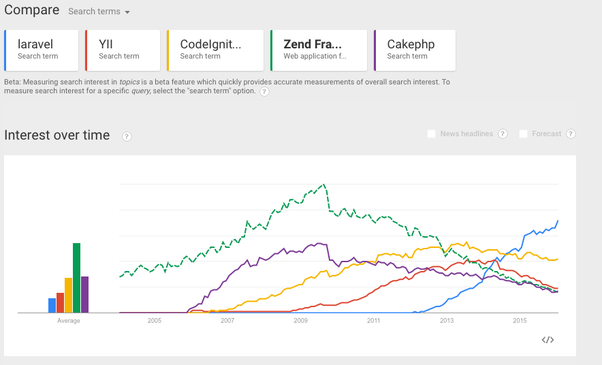 PHP has many frameworks in its fold; with Laravel, Yii and Codeigniter to name a few. These frameworks are very popular among PHP developers as they help them to develop complex, and secure applications faster. With these frameworks, it is easier than ever to create and run applications with PHP development. Apart from these frameworks, there is also Zend, CakePHP, and Symfony that are very popular, and widely used.
With such a legacy, it is highly disingenuous to even consider that PHP would die out anytime soon.

These pointers clearly show that PHP is not going to become extinct, at least, not in the near future.

So, is the end near?

Not really. According to the Web usage statistics by CMS Tech, around 21 million sites run on PHP, not to include the popular and widely used PHP CMS and frameworks.

The sheer number of legacy Apps developed in PHP, and the huge PHP developer community is sure to keep PHP in the top 10 programming languages for some more time to come. Even with the assumption, that PHP is no more used, it will still take a good 5-10 years before it gets gradually phased out. What is indeed happening is that instead of being the one major scripting language, it is now sharing the stage with many other popular scripting languages.

Thanks to the revamped PHP 7, its promises to OOPHP, and the immense popularity of its framework like Laravel, it is safe to say that PHP indeed is riding the wave of resurgence.

So, if you are looking for a suitable partner for your PHP development needs, get in touch with our team at Moon Technolabs Pvt. Ltd., one of India’s leading Web development company.

« How much does it cost to make a Fitness App?