How Google Play Store Does Better Than the Apple App Store? 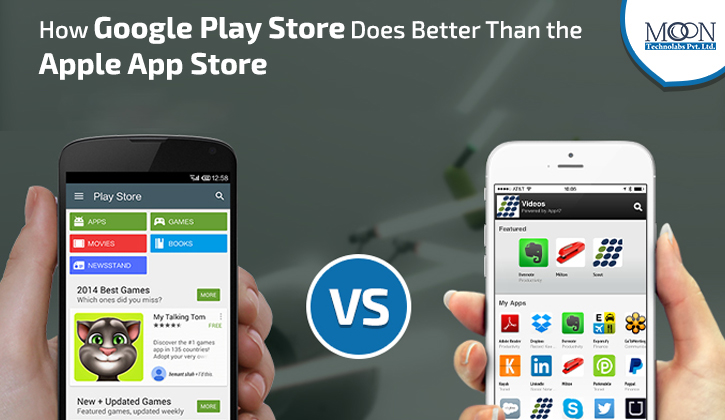 Apple or Android, let’s have a glance at some critical features and find out who stands to win:

Smartphone users find it easy to download, install and make use of apps from Google Play Store rather than from Apple App Store.

While it is easy to install and adapt to Android apps, this is not the case with Apple. Although Apple App Store has stretched out to include four major platforms – iOS, Mac OS, tvOS, watchOS but still these applications cannot be used by every smart phone.

Apple app store features only the most downloaded applications conspicuously while with Google Applications are featured based on user recommendations and ratings, which also make them discoverable.

To publish a game or application on Google Play Store makes these available to over a Billion Android users spread in more than 190 countries.

Billing can be checked

Charges for apps, subscriptions and in app products can be granularly controlled by help of Google Play Billing. This method is secure, quick and convenient and users in over 135 countries make use of it.

Google Play Developer Console helps users to publish their games and applications on all Android Platforms.

Open doors to Innovation on Android

Distribution of games and apps on Google Play paves way for style, size, shape, position and layout of latest and ever evolving features like Android TV and Chromecast, Android Auto, Android Wear, Immersive Virtual Reality etc. Superior quality, trusted games and apps are designed for teens, kids and parents to suit their needs.

Google features more than 2, 50,000 apps as compared to Apple which features around 1, 00,000 apps and that too with restrictive inclusion policies.

While Android developers just have to pay $25 to get started with development; it’s not an easy task for iOS developers. One has to pay a $99 / year to develop under Apple Developer Program. A similar structure is followed for getting registered for MFi program and iOS developer University Program.

Mobile app development companies have to learn how to utilize the quintessential features and potentialities of App Stores, be it Google or Apple. It takes great effort to engage global users and get your app monetized. Five of Apple’s features makes it win over Android – TouchID Fingerprint, Facetime, A physical switch to log into your phone, voice assistant that writes what you speak and default messenger app (to send free messages to other Apple users). Android still wins the game and remains OS of choice.

5 Secrets To Developing An Engaging eCommerce App For Your Business »