Flutter Vs. NativeScript – Which One Is Better And Why? 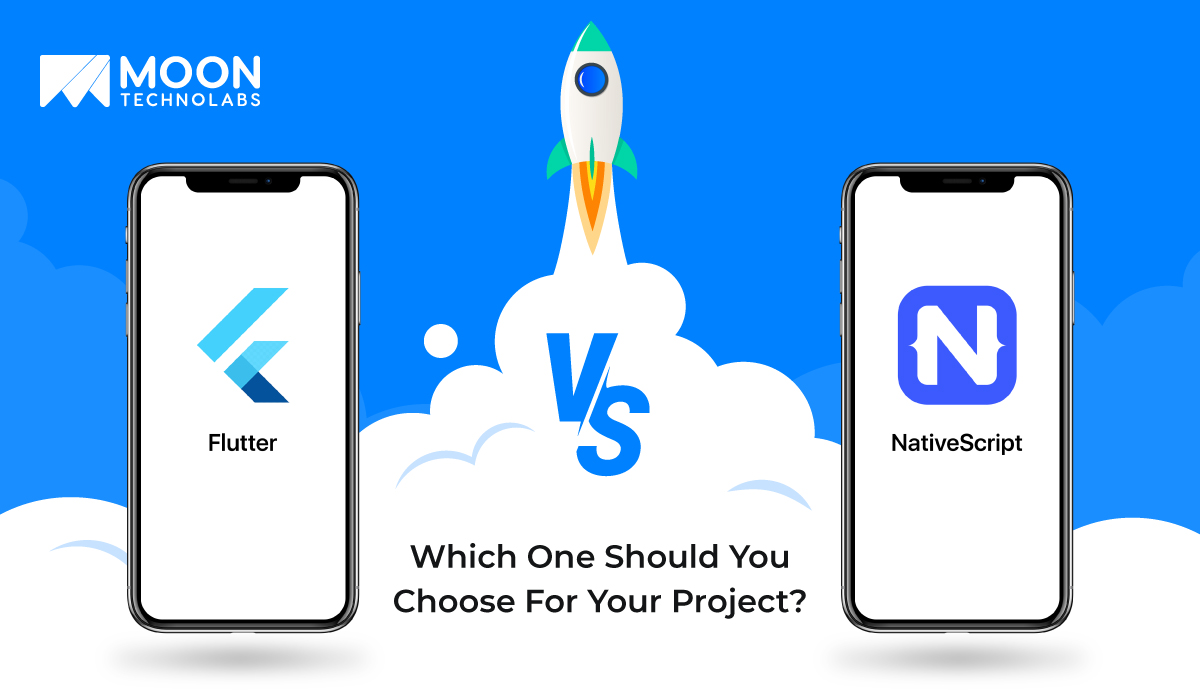 It’s never easy to choose a framework to build an application that delivers exceptional native performance, powered by rich features, an understandable architecture, and in a manageable size. Both Flutter and NativeScript are excellent choices. However, depending on the situation, one may surpass the other. That’s why you need to know which one to select.

There’s one thing that a native app does better than a cross-platform app – it can take full advantage of the features of a device or its operating system. This particular functionality compels hundreds and thousands of businesses to stick to native applications. After all, it has the power to utilize the full potential of the device and its features.

Flutter is a new-age SDK that exudes modernism from every aspect. It’s a framework designed by Google that can offer numerous pre-fabricated widgets and modules needed in building native solutions.

NativeScript, on the other hand, is a framework based on JavaScript. It offers functionalities mimicking native applications combined with options for multiplatform compatibility. Developers create apps on this framework using TypeScript, Vue, and Angular.

As the business owner, you need to decide on a framework that’ll be future-proof or adaptive, costly, or pocket-friendly.

In some aspects, both frameworks share specific similarities. However, in terms of the system components, size, architecture, development costs, and other factors, both are different.

An overview of Flutter

This one is an open-source framework that utilizes a programming language called Dart. Google created both the framework and the language. Providers of flutter app development services describe it as an improved UI toolkit used in building cross-platform applications with just one codebase.

An overview of NativeScript

Just like Flutter, NativeScript is an open-source framework that a developer can use to build cross-platform mobile solutions for Android and iOS with JavaScript. It has the power to transpile one language to another, which, in turn, allows developers to create fully-native apps using VueJS, Angular, and TypeScript.

Before you decide to go for nativescript app development from Moon Technolabs, you should check out these differences based on the advantages and disadvantages of both frameworks.

This feature reflects alterations immediately without losing the state of the app.

It can provide rich widgets, and they adhere to the guidelines of Material Design and Cupertino.

Code rewriting won’t be necessary as it can integrate with Objective C or Swift for iOS and Java for Android easily.

The tools and libraries of Flutter are impressive enough, but they aren’t as powerful as React Native.

Vector graphics and animation support can be problematic, particularly in rendering plugins on time.

The platform of operation

You can’t use it to build apps for Android Auto, tvOS, watchOS, or CarPlay.

It uses an XML-Esque-based markup language, just like HTML to develop apps loaded with customized features.

It can access the API of a native device through native components developed using native performance.

Limitations with the UI

HTML and DOM don’t get too much support. As a result, developers have no other option but to learn to use the different components of the UI.

Developers have to be aware of the APIs of Android and iOS, apart from native functionality, to access the hardware components of a device.

The native nature of an app built using NativeScript causes specific testing issues. You can test such an app appropriately only on an emulator or the device on which it’ll run.

Performance won’t always determine everything, especially if your project isn’t too complicated. However, if you’re going to build something large, you have to pay attention to this aspect.

Compared to its sworn rivals, flutter app development services will prove worthwhile. It doesn’t rely on a bridge to communicate with the native modules because it has native components available by default.

NativeScript doesn’t deliver a stellar performance, but it isn’t worth ignoring, either. Instead, it manages to stand at par with most of the other cross-platform app frameworks available right now.

When you have to select a framework for your project, you must stick to the flexible ones to avoid strict enforcement of guidelines and architecture. Experts in programming always recommend treating a framework as a guide instead of methods or standards.

The architecture supported by Flutter

Flutter features a layered architecture. If you break down a simple app built using Flutter, you’ll find that it starts with a top-level root function followed by basic widgets and rendering layers. After that, you’ll find the animation gestures.

The architecture supported by NativeScript

If you resort to nativescript app development for your project, you’ll get an end-product that follows the MVVM or MVC architectural pattern. However, the framework primarily functions on CLI, plugins, and modules. Its structure contains several modules, and each plays a role in enabling a set of features.

Making an app work without glitches under continuous load and ever-increasing consumer expectations is a significant challenge. App developers conduct several tests to combat this problem. They ensure compliance with compatibility, UI standards, and usability through these tests.

Ease of testing on Flutter

Flutter can offer extensive support to a developer for automated testing as it uses Dart as the programming language. It has several testing features to inspect apps at the widget, unit, and integration level. Flutter also has detailed documentation associated with testing.

Also Read : What Does Flutter 2.8 Bring To The Table?

Ease of testing on NativeScript

After the release of NativeScript 2.5, it follows an exclusive QA workflow that augments the framework’s default testing facilities. It connects unit testing with the default CLI to allow developers to use various inspection tools, such as Mocha, QUnit, and Jasmine.

Flutter and NativeScript have all the official guidelines, documents, third-party libraries, open-source projects, and plugins developers need throughout the process of building an app.

Flutter is still unsuitable for massive projects. Then again, for startups, Flutter can be a boon as it’s suitable for building excellent MVPs. You can use it if you wish to create prototypes faster. After that, you can experiment with them while reducing your expenses to check how your app idea performs in the real world.

Compared to most of the frameworks available right now, advanced or complex apps work smoothly with NativeScript and deliver high performance even when building an advanced solution. However, if you’re going to build a fully-packed complex application, you’ll need extra UI and XML support.

User experience has been crucial since the dawn of the idea of mobile applications. Naturally, it will dictate your choice of framework. With better UX, you’ll build a base of customers loyal to your brand or product.

Creating enterprise-level apps is one of the extra benefits of selecting this framework. Additionally, developers can customize the professional-level and free-of-charge UI elements explicitly. As all the features receive native functionality and native control support, NativeScript apps offer better performance and user experience.

Well, there are several other factors worth looking into, such as app size comparison, code maintainability, learning curve, and availability of developers. Unfortunately, it isn’t possible to include them all in this write-up.

Nevertheless, you should start looking for a flutter app development company if your project fulfills the following criteria.

NativeScript should be your choice if your project fulfills the following criteria.

Based on the information provided here, you should be able to make the right choice. If you have other queries, consider researching the internet.

How much will it cost to hire Flutter developers?
The average fee of a Flutter developer ranges between $20 and $100/hour.
What about the learning curve of the frameworks?
Flutter is relatively easy for a trained developer to learn, but NativeScript demands extensive learning as it constantly switches between TypeScript, Angular, and JavaScript.
How easy is it to maintain apps built using these frameworks?
Whether it's an app built using Flutter or NativeScript, maintenance is easy on both frameworks.

What Is An NFT? The Informative Guide For Beginners In 2022 »

« React Native vs. Ionic – Which One Is Better And Why?