Flutter Vs. Ionic: Which One Should Be Your Choice? 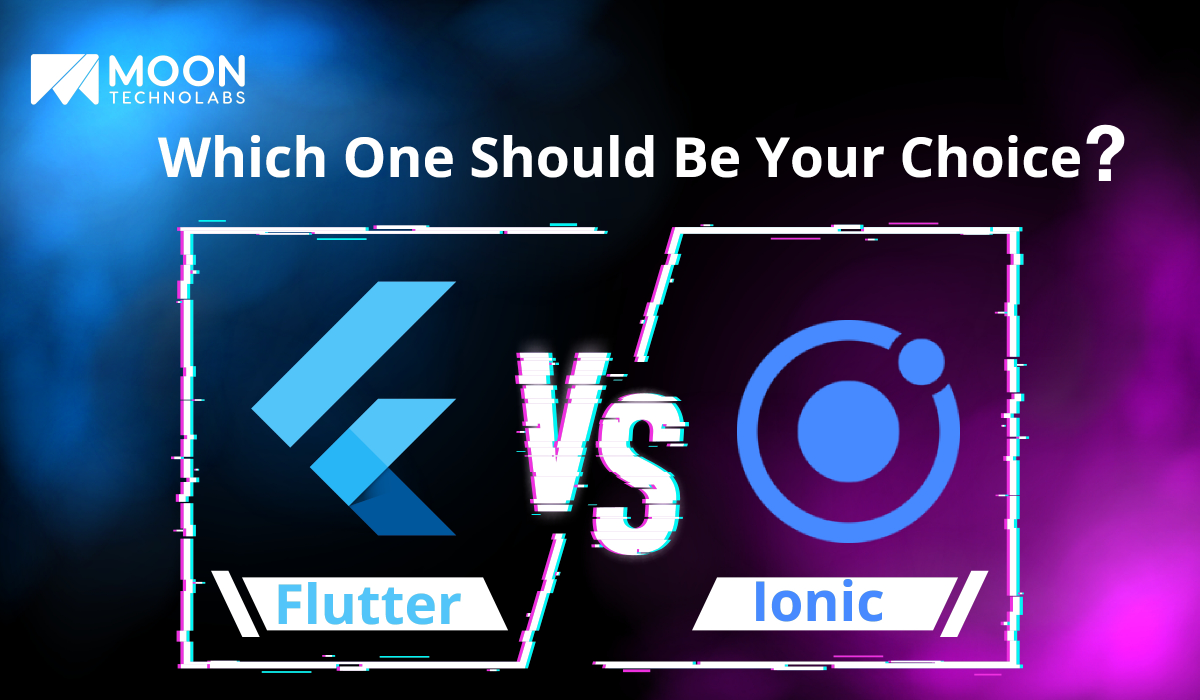 Selecting a hybrid app development platform that has the functionalities you seek can be a challenging task. After all, you have to know which one will let you build an app the way you want to without deviating from your predetermined budget. Every framework is different and has something exclusive to offer.

Selecting a hybrid app development platform that has all the functionalities you need for your app can be a challenging task. After all, you have to know which one will let you build your digital product the way you want to without deviating from the budget you allocate.

Specific differences separate every framework, and all of them have something exclusive to offer. Analyzing your options in detail based on multiple factors will help you pick the right one. This topic aims to scrutinize two separate hybrid app development titans – Flutter and Ionic.

At the moment, the entire IT industry aims to write code once and use it wherever they can. More and more businesses are opting for hybrid mobile solutions instead of native apps as they can reduce development time and associated expenses dramatically.

You already know which frameworks this write-up will focus on. In terms of fame, both have huge developer teams to back them up. Flutter provides a rich collection of integrated tools, built-in widgets, and customizations. Ionic, on the other hand, offers an array of plugins that can increase the rate of development.

Just because you know a thing or two about Flutter doesn’t mean you should delegate the project to a flutter app development company. The same goes for ionic app development services. If you want to pinpoint the appropriate framework for your project, you need to compare the two.

This one is an open-source framework created by Google. It functions with a programming language called Dart – also developed by Google. App development specialists describe Flutter as an improved UI toolkit used in building cross-platform apps with just one codebase.

This one is also a UI toolkit of the open-source kind. Developers use it to build cross-platform solutions for mobile devices. Instead of resorting to the native elements of a device, Ionic utilizes Webview. It also leverages JavaScript codebases, such as Angular, vanilla JavaScript, Vue, or React.

Both frameworks have specific advantages and disadvantages. These pros and cons will help you find out whether a flutter app development company will belt out a better digital product than the providers of ionic app development services or vice versa.

The hot-reloading system of Flutter lets developers change something instantly without jeopardizing the state of the app.

Your developers won’t have to rewrite code as Flutter can integrate with Objective C or Swift for iOS and Java for Android.

The richness of the widgets of Flutter is something worth noticing. These widgets adhere to the guidelines of Material Design for Android and Cupertino for iOS.

The tools and libraries of Flutter are impressive indeed, but they aren’t as rich as the ones you get on Ionic.

Animation support and vector graphics have problems in rendering the plugins on time in Flutter.

Ionic is a platform-independent framework that brings down the effort, time, and resources needed to build cross-platform solutions while giving the app a native appearance.

Ionic utilizes the capacitor system to reduce the amount of time needed to build an app by offering a straightforward interface for accessing native API and SDK on every platform.

Ionic is surprisingly scalable. No matter how many active users an Ionic app has, it won’t affect performance.

While Ionic provides a massive collection of plugins, your developers may have to create highly-specific features.

Due to the absence of the hot-reload feature, an Ionic app gets refreshed fully whenever a developer changes something. As a result, the development speed gets affected.

Ionic isn’t suitable for memory-hogging, complex apps because it uses Webview for rendering. If you use Ionic to develop something heavy, it’ll perform slowly.

Development modularization points to the capability or the extent to which the framework of your choice lets different people with various technical skills and experiences oversee one project. For example, a large app with a jumbled code structure will take longer to build.

Flutter can provide better accessibility for diverse teams. It can also divide project codes into various modules using its “pub package system.” Your developers should be able to construct various modules easily with the plug-in feature or add or alter the app’s codebase.

Ionic facilitates modularity by using the @NgModule class of Angular. Your developers can fabricate various components by using the modules and combining them for the application’s structure. Each component will have one root module for bootstrapping.

You’ll know whether to hire ionic developers or Flutter developers based on the performance standards of both frameworks.

Flutter delivers better performance than most of its rivals. It doesn’t need a bridge to communicate with the native modules because the native components are available by default.

Selecting the appropriate architectural framework will make the development process simpler and even provide support to your app when you update it in the future.

The architecture supported by Flutter

Flutter has a layered architecture. The hierarchy of simple apps built using this framework starts with a top-level root function or widgets specific to various platforms. Basic widgets follow this layer, and they interact with the rendering layers and the platform.

Another layer exists below the rendering layer. It has animation gestures that can transfer API calls to the app’s foundation.

The architecture supported by Ionic

Ionic utilizes the MVC architecture of AngularJS – a design pattern that comprises the Model View Controller. With it, developers can create sophisticated cross-platform and single-page applications optimized specifically for mobile devices.

When you hire ionic developers from a recognized company like Moon Technolabs, you don’t just get an experienced team of developers to oversee your project. You’ll also receive community support as part of the bargain.

It’s easy to maintain an application developed using Flutter. The simplicity of the code allows developers to pinpoint issues, use external tools, and get support from third-party libraries. Additionally, the hot-reload feature of Flutter fixes multiple problems at hand.

When developers use Ionic, they often have to rewrite the code to keep their applications stable. Naturally, code maintenance can be a challenge for Ionic applications. Also, the backward compatibility breaks in most instances. It makes the experience even more frustrating than usual.

App development organizations like Moon Technolabs evaluate their options before choosing one to work on the project delegated to them by their clients. Every reliable agency will compare the best cross-platform frameworks and then help clients decide.

As you can see from the information provided here, both Flutter and Ionic are ideal for cross-platform app development. However, your preferences can differ from another business owner. Instead of choosing a framework depending solely on preferences, you should consider the following.

Flutter will be the better choice if your project satisfies the factors given below.

Ionic should be your choice based on the following parameters.

If you pick a cross-platform app development framework based on the information provided here, you won’t have to look back again.

Where to look for developers?
Moon Technolabs is an app development agency where you’ll find both Ionic and Flutter app developers.
How much do these developers charge for their services?
Flutter developers charge anywhere between $20 and $100/hour. Ionic developers will cost you between $10 and $150/hour.
What’s the average size of an app built using Flutter and Ionic?
The simplest app created using Flutter shouldn’t be larger than 7.5 MB, but if you use Ionic to build the same app, it’ll occupy only 3.2 MB on mobile devices.

WebRTC Development Trends In 2022 That Will Shape The Market »

« Everything You Need To Know About NFT: The Ultimate Guide