Epic Smartphone Trends To Look For In 2019 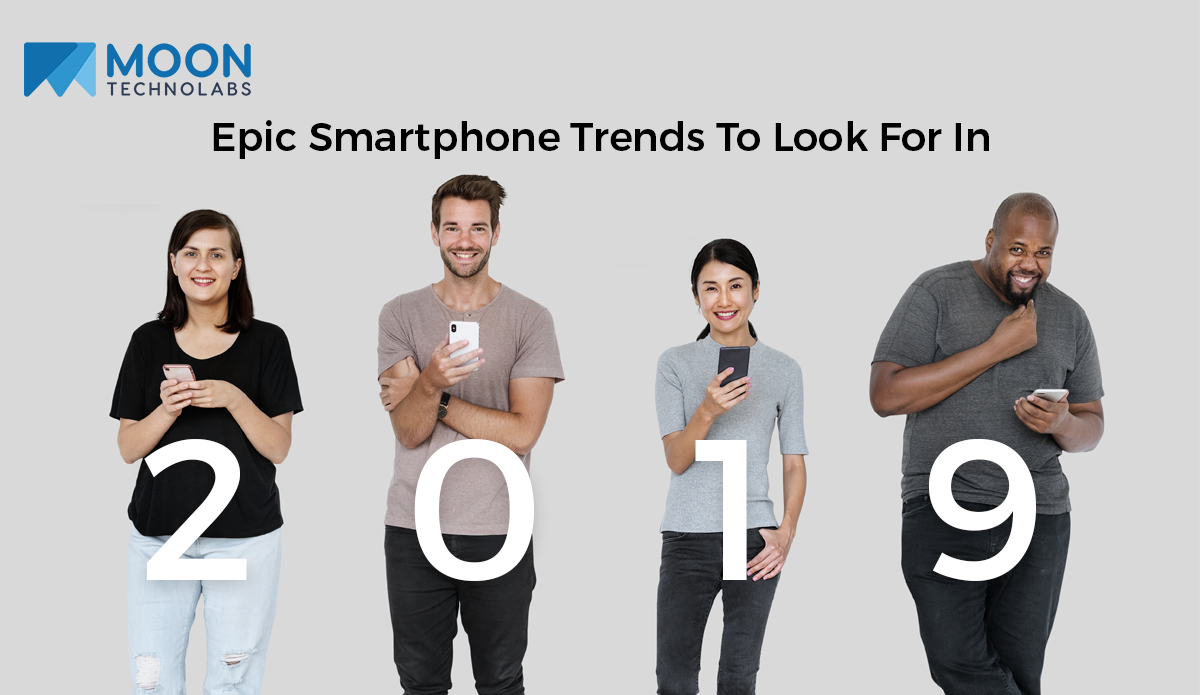 Globally, for the record ever, growth in the smartphone industry has notably slowed down. Top mobile brands such as Apple was also on the list to take a hit. Many analysts have predicted the downgrade in sales expectation for 2019.

It is a no-brainer that mobile phone users are now not upgrading as quick as they use to a couple of years back. There are some strong views behind it and we shall learn the same as we move along further in the blog. Meanwhile, device manufacturers have started an open battle over specs, however, there aren’t enough reasons to go for an upgrade.

Despite the fall and against every odd, users can expect few radical rethinks for smartphone form factors to take a transformational upgrade to cameras, 5G, foldable and in-display fingerprint reader are all to unveil in 2019. From the best mobile app development companies, we bring you the top smartphone trends that will seemingly be possible to use.

Let’s clear the mist from the air, shall we? There are many journals, news, and publications surrounding the 5G, naming 2019 as, “The Year of 5G”, but seems to be missing the core point. Not to deny entirely, but there is a likely scenario of seeing the first wave of 5G handsets rolled out in this year. Mobile handset manufacturers such as OnePlus, LG, Samsung, HTC and many others have claimed to come up with one or two 5G enabled devices as per their respective capacity. However, Apple seems to be not in a rush and has announced the release of the 5G handset in 2020.

Though the 5G has shown tremendous potential to take the user-experience beyond the usual, on a larger scale it is still regarded as marketing catch from the industry pundits. While mobile network operators have promised to roll out and support the technology but from the end user’s perspective, most of the initial phase will be using a lot of 4G and hence, becomes no point in spending a lot for a premium feature which might not be fully utilized. Of course, this nowhere presents an obstacle for handset hardware makers or device manufacturers along with their respective carrier operators to hurry ready-to-market these devices and services as soon as possible.

We’ve already waited for long to see the un-impressing results from just a couple of devices as more and more smartphone makers are finding it hard to make it a next big thing. The device was showcased at the tech conference but didn’t break the barriers. Moreover, with the initiation and prototype being ready in consumer-form, now many companies are accelerating into providing and exploring the form factor.

The effort made by Google to partner with Samsung and provide a custom Android version that goes along with the form factor is definitely going to be pricey like a 5G device but the major convincing would still be to let consumers believe that they need one such device in their life. Few of the top mobile app development company, who are constantly involved with the research and development of providing cutting-edge tech relevant and adaptive to these technologies.

Majorly, all the manufacturers have welcomed and inculcated the edge-to-edge design. Even Google took a piece of cake with Android Pixel 3 XL. However, widely accepted pinhole or hole punch design infused on Huawei Nova 4 looks like a favorable route to a wide array of camera manufacturers.

Apple broke the barrier with face-recognition but still in terms of display screen market, many found it inconvenient to log for full 3D face scan and proved to be vulnerable to security. This ensures that the fingerprint scanner tech isn’t going away anytime soon.

The first-ever fingerprint scanner was launched in the market by OnePlus’ 6T and it took the user’s breath away. Samsung’s S10 is going to follow in footsteps to provide in-display fingerprint tech around February and looking at the same trend, it can be expected from many others device manufacturing companies to follow the same.

« Definitive Guide Of Questionnaire To Check With Mobile App Developers