What Are The Differences Between Food Delivery And Food Aggregator Apps? 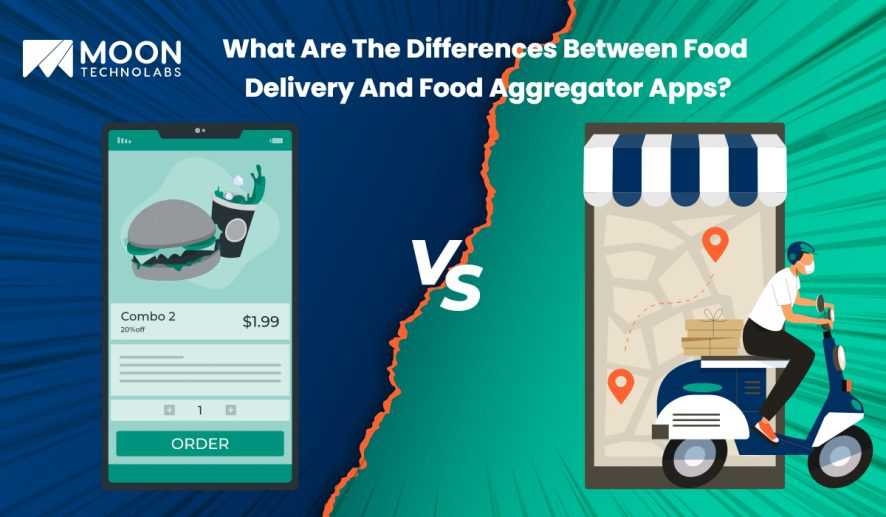 As the number of businesses catering to their customers with food and beverages increases with time, the owners of these establishments should consider leveraging online food delivery services to connect with their patrons. Now, every restaurant owner has to be able to differentiate between apps that will bring them closer to their consumers directly and third-party aggregator apps, such as Uber Eats and Zomato.

There was a time when people had to change out of their pajamas and rush to the nearest restaurant to buy something they craved for suddenly in the middle of the night. If they didn’t, they had to make do with whatever they could find in their refrigerators or simply go to bed on an empty stomach.

Today, all of that is history. Commoners have access to food delivery apps on their smartphones. These apps allow them to place orders for their preferred meals and get the food delivered directly to their doorstep. Regardless of what anyone wants to eat, everything from street-side stall food to starred meals from recognized and celebrated restaurants is available on these mobile applications.

Foodpanda is the first food delivery app that made its entry about nine years ago in 2012. Back then, only a handful of participants delivering food to their customers regularly on demand, a few fast-food corporations, and a couple of privately-owned organizations used to partner with Foodpanda.

Within the next three years, in 2015, there was a sudden rise in the number of startups that invested heavily in on-demand food delivery app development for Android and iPhone. Companies like Deliveroo started cooperating with Honestbee, but this collaboration didn’t last long, at least in Singapore. In 2016, UberEats entered the field. Again, it had to shut its front door when its competitor called Grab, a ride-hailing firm, captured the activities of UberEats in March 2018 in Southeast Asia. It resulted in the formation of another company called GrabFood.

As time passed, several other companies started diverting their focus toward delivering edibles of all kinds, including beverages. Due to the incredible rise in on-demand food delivery app development for Android and iPhone, these companies now have the opportunity to get and stay in touch with their patrons.

Market researchers from a world-renowned organization predicted that the online market of food supplies will yield almost $28.5 million in 2021. Combined with a yearly expansion rate of 4.3%, the online food delivery industry will earn around 4 million in terms of revenue by 2025. The same market researchers believe that these figures will just keep on increasing. It’s a direct representation of the importance and value of on-demand food delivery app development. Restaurants will occupy the largest section of the food delivery market with sales volumes crossing $16,500 this year. China will also earn almost $57,000 in sales in 2021 and will become one of the largest markets.

Now, as the owner of a restaurant, bistro, café, eatery, or any other kind of food establishment, you’ll be in an advantageous position if you arm yourself with the knowledge of the differences between on-demand food delivery app development and food aggregator applications, especially if you’re a first-timer planning to become part of this extremely lucrative industry.

In most instances, these applications have other apps working with them to facilitate the entire delivery process.

In most instances, these applications have other apps working with them to facilitate the entire delivery process.

If you hope to build such an app, you’ll need the best designers and developers of food delivery mobile apps solutions to look into it.

Commoners recognize food aggregator mobile solutions as applications used by food establishments to reach existing, as well as new customers. These are third-party mobile apps or websites, and they partner with restaurants and other similar eateries to deliver the food they produce to their customers. The expenses associated with logistics and delivery goes into the pockets of these businesses.

Then again, the money charged by these delivery service providers keeps increasing with the exposure received by the restaurant and the resulting popularity of the cuisines they serve. The ultimate objective of an aggregator app is to manage the delivery duties and increase sales. These things raise the commission that the restaurant has to pay to the deliverer against each order received.

Now that you’re aware of the differences between the platforms, it’s time for you to contemplate which business model is appropriate for you. Market researchers in the USA found that the on-demand app development sphere held the driver’s seat. They were much more popular than the most successful food delivery aggregators back in 2020.

Doordash was at the top holding 45% of the market share, followed by Grubhub occupying 23%. UberEats and Postmates were the other two. They captured 22% and 8% respectively. Only 2% was left for other businesses to pick at. Independent companies and a few recognized national corporations were collaborating with third-party deliverers. Small restaurants, regardless of the quality of food produced, had no other option but to take their sales volumes to the next level. It became the only way for them to stay afloat. On-demand food delivery app development when done right, can help businesses.

These establishments operate in an entirely different method, but generally, there are several similarities in the way they work. They allow restaurants to showcase their menus on their platforms. As soon as a customer placed an order, the delivery contractors rushed in to handle the logistics.

A third-party platform can advertise the food offered by restaurants to starving customers exploring the app in their location. However, as already mentioned earlier, they demand quite a hefty commission against each order received on their platform, even if a customer is a regular patron of the restaurant and doesn’t require the app to guide him/her to the establishment. The top on-demand food delivery app development company will always be able to help enterprises.

Restaurants require the convenience offered by these aggregators, as well as traffic, to draw customers using an aggregator app. Of course, restaurant owners also have a compelling reason to hate aggregators because they take the shortcut to earning money without providing anything worthwhile in return. That’s why many restaurants using the services offered by delivery aggregators began encouraging their customers to buy food from them directly over their phone numbers or websites. They even started offering exclusive discounts and reducing the options on the aggregator applications.

As you can see, it’s better and more lucrative for you to resort to food delivery mobile app solutions instead of resorting to aggregator apps to cater to your consumers. In fact, if you consider developing an app exclusively for your business, you’ll be able to get around the barricades put up by third-party platforms. You may also look into hybrid delivery – something that’s gaining popularity steadily among the owners of chain restaurants. It’s nothing but restaurants having their online food ordering platforms through which they receive orders. However, they outsource the task of delivery to third-party organizations. It negates the issue of extremely high fees demanded by aggregators. This particular business model also mitigates the need to invest substantially in maintaining a team of deliverers.

In numerous locations spread throughout the world, food delivery mobile app solutions beat aggregator platforms. Restaurants can change their appearances and adjust their menus by going for app development services. The resulting app may also have the ability to take care of communications between customers, restaurants, and suppliers while being under the control of the business owner. You can also take care of your promotional strategies and send push notifications to your customers.

These things will work together to simplify communication and help you establish an indestructible connection with your consumers. Restaurant owners, operators, and managers should take the time to understand the ever-increasing diversity of the food delivery industry and go beyond aggregators to establish a significant presence among the public before expressing what they think of mobile food ordering solutions. Eateries won’t have much to gain from working with third parties. Instead, they’ll have the chance to earn a lot of profit if they seek out appropriate alternatives for delivery they can control.

What Is Pick And Drop App Development? Explain Features & Cost »

« Go Digital Or Go Home – What The Pandemic Taught The Retail Industry?