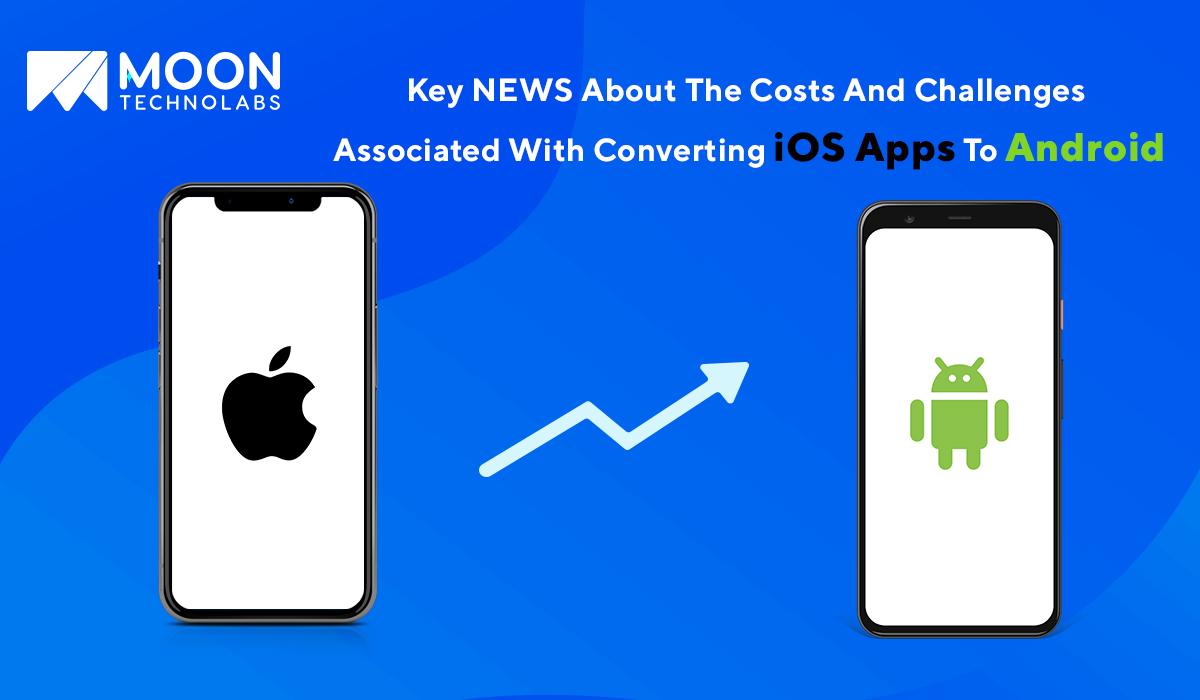 Have you been searching the internet for comprehensive information on how to convert an iOS app to Android? If so, then you can stop now. In this write-up, you will learn everything about how such a transition is possible, the amount of money you must spend, and the challenges that come with it.

Getting an iOS app developed for mobile devices can be worthwhile for businesses of all kinds. It will help you reach a massive audience base as the platform already proved itself to be an excellent choice to start with. You will be able to make a significant sum of money via the Apple App Store.

However, it doesn’t mean that you can afford to turn a blind eye towards the Android platform. After all, it currently holds a market share of more than 80%. So, if you started your business venture with an iOS app, then you can convert it to an Android app later, and in doing so, you’ll be able to reap the juicier fruits of your labour.

Those who are willing to pay the android and iOS app development cost of porting their iOS app to Android wish to earn more through the Google Play Store. As soon as your iOS application starts doing well in the market, it will seem like a sensible idea to have another version of it that works on Android. With it, you will be able to deliver a richer user experience.

If you’re thinking about whether to go down this path or not, then you should go through the following reasons. You may find them to be quite compelling.

Reasons to make the conversion

Reaching more people – As already mentioned earlier, Android’s market share is significantly higher than iOS’s. Naturally, it has innumerable users, and if you don’t target them, then you’ll lose potential clients.

New features – You should check out what Android has to offer at the moment. By converting your app from iOS to Android, you will be able to provide more enhanced features that Google added to the platform, including push notifications and widgets, Android Intents, the physical back-button, and Android Wear.

Monetizing options – App monetization options are more in Android than in iOS. In fact, you will have multiple options at your disposal. Researchers say that the global app revenue count is higher than $50 billion. This year, it grew up to $100 billion, and it will continue to grow with time.

Running an analysis: The first thing to do is to scrutinize the app and come up with a plan. It means exploring the iOS app, the features to boasts of, its design, characteristics, and workflow. Problems and errors can also pop up during the analysis, which the developers have to get rid of. Or, they can optimize it for the Android platform. For that purpose, they have to check the backend individualities, tools, frameworks, and the porting process.

Executing the plan: Now, the developers have to evaluate the technical matters concerning the libraries, the code, and third-party services. After that, they dedicate their attention towards choosing an appropriate tech stack to port the app to Android in a way that reduces the amount of time required. Finally, they move on with development. Everything else depends on the app that you wish to convert. In many instances, porting an app from iOS to Android is akin to creating one from scratch for the latter. Naturally, you can’t expect an app development agency to finish the task within a week. Developers have to alter the design using Android-specific UX systems and functionalities. They also need to tweak the backend and the tools for monetization.

Testing and releasing: In the end, the developers will run a quality assurance check before releasing the application. They can use emulation tools or Android devices to test it. It’s worth mentioning here that app testing can be of different types, including validation, load testing, beta testing, and user acceptance testing. After examining everything thoroughly, the developers will give you the green light to release it.

Even the best iOS mobile app development company can face challenges in this task. After all, porting an app from one platform to the other isn’t easy or simple. Here are a few of them.

Screen size: When it comes to porting an app from iOS to Android, the screen size difference usually ends up being the most common problem. The screen size of iOS and Android differ significantly. Additionally, developers have to select the right bitmap size for the app based on the gadget. Android apps, on the other hand, can work on many devices regardless of the screen size.

No variation: The screens of Android devices are available in various sizes, while the iOS smartphones don’t have it. It’s because only Apple Inc. manufactures iPhones, whereas hundreds and thousands of companies create Android devices.

As you can imagine, packing everything inside an iOS app and transporting it to an Android app can be an intimidating task. However, app development agencies have been handling such projects for a long time. You can expect them to complete your project sooner rather than later.

« How To Start An eCommerce Business And Profitable eStore In 2021?