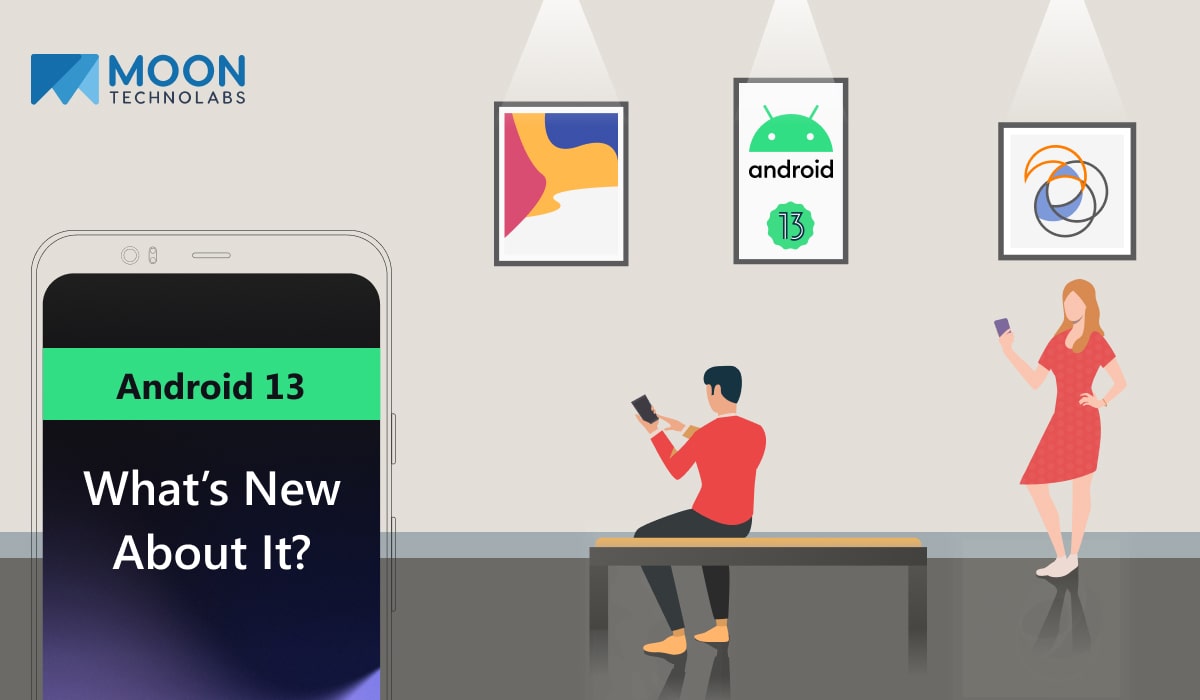 Erected on the foundation of Android 12, Android 13 is, by all accounts, one of the biggest updates to this operating system for mobile devices since the last iteration of 2014. Here you’ll receive an in-depth explanation of all the latest features brought forth by Android 13.

Android 12 is still making its way into smartphones that can support it. Until recently, devices lacking the word “Pixel” couldn’t make it work, but Google is already showcasing the next release of its operating system for mobile devices – Android 13. It’s only natural for business owners to want to learn as much about it as possible before hiring custom android app development service providers. Other interested parties will also want to read this.

Based on the information available so far, Android 13 will launch sometime in autumn 2022. Also, according to existing insights and reports from the previous two developer previews, Android 13 aims to improve the features introduced in Android 12, such as “Material You.” It’ll even bring a few new additions that’ll cover everything, including privacy, gaming, security, battery performance, and more.

The creators of Android have a habit of giving a codename to every version. While it did get rid of this practice, at least in terms of making these codenames public, it restarted the trend when it reached Android 10, and it did so internally. Fans are always curious about learning what codename the brand is going to give a new version.

If you aren’t aware of this fact, you should know that an iteration of the operating system comes with a codename. It started from version 1.5, and these codenames receive inspiration from sweet treats of all kinds. The names progress in alphabetical order.

When you can get it

Every custom android app development agency has been noticing the official signs of the existence of Android 13 since 11th February 2022. It was also when Google unearthed the first developer preview build of the new significant OS update.

Each Android generation passes through innumerable stages of development before reaching the masses. It starts with the developer reviews and then moves on to launch full-fledged betas to the public. The process concludes with a general release, mostly spearheaded by Pixel devices of Google. A few manufacturers who subscribe to the Android Developer Preview Program also get to launch their latest phones with the new iteration of Android.

Here’s a list mentioning the older releases of Android, as well as their respective beta versions.

From the release calendar elucidated above and the fact that the first two developer previews of Android 13 stayed on schedule with the older versions, it’s safe to assume that the first beta version for the public should come out in May. It may also coincide with the yearly developer conference, Google I/O 2022, scheduled for 11th May 2022.

Without further ado, this topic will delve directly into the primary matter at hand – everything new that Android 13 will bring to the table. After all, depending on the latest features, you have to hire a dedicated android developer for your project and tweak it the way you need to.

The most noteworthy change introduced by Android 12, even if it was only for the users of Google Pixel phones, was the “Material You” system. It was a new design language that aimed to bolster the overall user experience of Android. Apart from that, the update displayed several latest security and privacy controls. It even had a few convenient extras, such as one-handed mode and scrollable screenshots.

The first developer preview sheds some light on things Android 13 will bring. Nonetheless, at the current stage, it falls on the enthusiasts of Android and diligent developers to snoop around and gather more info about the potential improvements and features the new release will possess.

As opposed to the present configuration of Android, the presence of the NEARBY_DEVICES_RUNTIME permission will allow apps to discover and connect to Wi-Fi devices close to the user easily and quickly without asking for location info. It’ll simplify interconnectivity via Wi-Fi with nearby gadgets and make things easier for app developers.

It’s an extension of Android’s already-existing document picker system. The Photo Picker will work as a standardized and optimized way for users to share pictures securely, whether local or cloud-based.

Just like the document picker, this feature will bypass the necessity for permission to gain access to videos and pictures on a device to provide access to the user to shared media. It’ll even unify the media-sharing experience of Android across different devices from various manufacturers.

The “Material You” uses an extension of the palettes available throughout the system to dress the phone’s interface with color theme consistency in Android 13. Even the app icons will take advantage of this effect.

Google fully controls its own applications. Naturally, changing their icons to match the theme will create visual inconsistencies, particularly in offerings from third parties.

When you hire dedicated developer, ask the expert to include a monochromatic version of your app’s icon in the submission. It’s the only way to counter the problem mentioned above. When connected with the code, it will let Android 13 dress the icon file with a dynamic “Material You” color theme system introduced in Android 12.

Also Read : Android 12 – Everything Known About Its Features So Far

The tiles of quick settings

Developers will get new APIs to make custom tiles to fit inside the quick setting section of the notification shade of Android. Developers will also make their apps prompt users to add such tiles instantly just by tapping the screen.

Developers will get native animation tools

All apps may look a bit more dynamic than before on Android 13 because Google will implement a new system called “RuntimeShader objects.”

App developers can use the same tools used by Google to beautify Android with UI effects, such as blur, rippling, or stretch over-scroll.

This new feature will appeal to multilingual folks. Codenamed “Paralingual,” it will let users specify language-related settings on every application. In other words, if someone has to use an app that isn’t available in their native language, they won’t have to worry about poor or downright incorrect translations.

It’s perfect for bilingual, trilingual, and even polyglots who want their apps set to various languages everywhere.

The so-called Project Mainline wants to make the procedure of updating specific parts of Android or including new features just the way apps get updated through Google Play system updates. Users won’t have to include them as part of an all-inclusive OS update.

It’s the way Google wants to promote features, such as the Photo Picker described earlier in this write-up. It won’t an entirely exclusive Android 13 addition.

Permissions for developers to downgrade

If you want your android app development company to pursue greater user privacy, you should check out this feature. Through a refined app permission model in Android 13, developers can downgrade currently redundant or previously-granted permissions on supported applications.

An app expecting to fire user-targeted notifications will have to start by acquiring permission to do so on Android 13. In Android 12 or older versions, the system handles the flow of upgrades on behalf of the developers. However, the developer site of Google doesn’t specify the meaning of the word “handle.”

Providing support to MIDI 2.0 devices instead of USB facilitates better support for non-Western intonation, increased controller resolution, and more expressive performance via per-note controllers. It’s what you’ll find written on the developer site of Google. This feature will come in handy for music producers and musicians.

Moon Technolabs is an android app development company that supports various form factors, including handheld devices, tablets, and even POS machines. While there’s still time for Android 13 to hit the market, this agency will monitor new releases diligently to learn about the latest features, behavioral alterations, and APIs that developers, users, and enterprises should know about.

Android evolves at breakneck speed, which makes it easy for folks to miss new information. You should let Moon Technolabs take care of the software solutions that you wish to build for internal or external usage.

React Developers Need These Tools To Increase Their Potential »