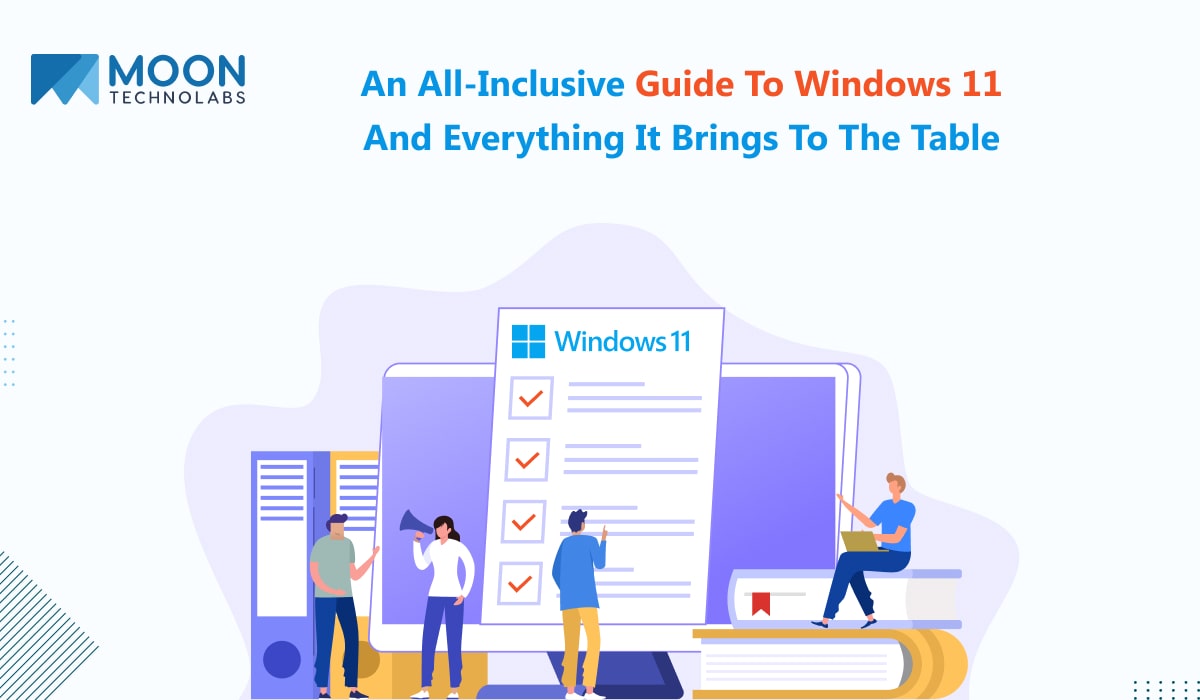 This topic is all about Windows 11 – everything new it has to offer to commoners and developers and whether you’ll be able to run it on your system.

Microsoft introduced Windows 11 on 24th June 2021, which is about six years after the debut of Windows 10. As you can probably guess, Windows 11 will bring several new features and updates, and you must learn about them if you’re planning to hire windows phone developers for a project.

Some of these innovations include a simpler design that aims to bolster productivity, creativity, and ease of use. It’ll provide better ways to connect to others faster, better gaming experiences for PC gamers, acquire information faster, a new and enhanced version of the Microsoft Store, and a more open-design ecosystem.

Almost everything in Windows 11 will unlock new opportunities for creators of all kinds, including app developers. This write-up is like a cheat sheet for you because here you’ll find all the details concerning the latest iteration of the operating system, including its features and system requirements.

So, what is Windows 11? It’s the latest version of the world-renowned operating system from the esteemed house of Microsoft. Windows 10 is its predecessor. If you hire windows phone developers, consider sticking to the ones that use Windows 11 to work on app development projects.

The newest iteration features an enhanced yet simplified interface that will inspire creativity and productivity in equal measures.

The release of Windows 11

Windows 11 has been available to one and all as of 5th October 2021. As long as your PC meets the system requirements, and as long as you have Windows 10 with the updated version 1909, you should be able to update to Windows 11. You only need to navigate your way to the “Update & Security” option in the “Settings” section.

Users can also leverage the Windows 11 Installation Assistant platform to avoid going to the “Update & Security” screen. In doing so, they can move to Windows 11 directly.

Microsoft released a patch for Windows 11 on March 2022. However, it isn’t a “feature update” to the overall operating system. A full-fledged “feature update” will be available later this year. Nonetheless, the patch has a few new features Microsoft didn’t talk about.

For instance, if you start Windows 11 with all the widgets turned on, you’ll receive a new icon in the lower-left corner of your computer screen. This icon will summarize local weather conditions. Microsoft has even rebranded the Groove media player and updated the Notepad application.

Everything new in Windows 11

Windows 11 often gets cited with another term that goes “Sun Valley.” In reality, it was floating around a few months before Microsoft announced Windows 11. It’s nothing but a codename for the massive UX overhaul that comes with Windows 11. The objective is to make the operating system more “touch-friendly,” which Windows 10 couldn’t achieve.

Here’s a list of some of the features that you and your mobile app developers will get with Windows 11.

The design-related changes in Windows 11 aren’t significant, but you do get several minor design enhancements. They are enough to give the new version of the OS a fresh appearance. For starters, you’ll see a new logo of Windows, as well as a group of new icons. The “File Explorer” has a fresh look, with better folder icons for the libraries.

There’s also more space between the menu items and rounded corners. Other changes in terms of aesthetics include a cleaner “Action Center” and new sounds.

By default, the taskbar is now in the center. Previously, almost all versions of Windows placed it on the lower left side of the screen, so this change is a breath of fresh air. The best mobile app developers, who build apps for iOS and Mac, apart from other platforms, say that it’s an obvious copy of the centered dock featured in Mac OS X.

Apart from the alignment factor, another change in the taskbar is that it’s a bit taller. However, a few things tend to affect the overall task experience negatively. For starters, users won’t be able to make height adjustments as it’s fully locked. If you click the left mouse button on the taskbar, you won’t get the classic menu anymore.

Instead, you’ll get an option to visit the Taskbar settings.

This one is perhaps the most noteworthy feature addition to Windows 11. Microsoft is planning to work with Amazon and Intel to make it happens. Windows 11 will utilize the Intel Bridge tech to run Android applications natively. Microsoft is also about to merge the Amazon Appstore with the Microsoft Store to provide these apps to users.

In other words, you won’t have to resort to emulators like BlueStacks anymore. Microsoft launched this feature last month, but it’s currently available to users based in the USA only. It wasn’t available initially during the launch phase. Even Google is planning to introduce Google Play Games to Windows 11.

This one, however, isn’t going to be a collaboration between the two brands. Rather, it’ll be a standalone venture.

The changes to the “Start” menu are the most visible of all. Every app pinned by the user will appear at the top with options to open several pages for the same. You’ll also get the recommended tab containing a mix of recommended and recent applications and files.

The power and account menus sit at the base. This new version of the “Start” menu rearranges all the old elements, but there’s one key item missing – the live tiles. You can do a few things to change the “Start” menu to make it look like the old one, but the new version is better.

At the moment, Windows 11 has a dedicated button for widgets. It’s akin to the “News and Interests” button that comes with the latest update for Windows 10. For now, it only provides personalized content from Microsoft services, such as MSN, and it presents the information in the form of small tiles.

Windows 11 also brings a new window snap system. It has been around since Windows 7, which you may recognize by the term “Aero Snap.” Windows 11 introduces layout presets to “Aero Snap” with layouts that pop up whenever you move the mouse cursor over the “Maximize” or “Restore” button.

It also provides four layouts for up to four windows.

Here’s something that’ll attract a windows mobile app programmer – Windows 11 will get a few upgraded native apps with an update. For starters, the “Paint” app that everyone loves will get a redesign. Windows 10 introduced “Paint 3D,” but Windows 11 won’t bring something as drastic as that. Users will get a more aesthetically pleasing toolbar along with a dark mode.

Windows 11 will even have a new Snipping Tool with better control and an upgraded editor. Other visible changes to native apps include “File Explorer,” “Xbox,” and “Microsoft Store.”

Windows 11 will also integrate Microsoft’s services deeply across the board. “OneDrive” seems to have a dominant presence across “File Explorer.” Other than that, it’ll integrate Microsoft Teams and the computer app of Xbox. While they make things convenient, they can annoy people who don’t use these services.

You and every windows mobile app programmer should have a PC with the following configurations to run Windows 11 smoothly.

Every computer fabricated and released after 5th October 2021 will come with Windows 11 by default. Almost all the recognized manufacturers of PCs upgraded their products and offerings at CES 2022. As a result, the new generation of computers will come with the newest version of Windows.

Now that you know everything about Windows 11, you can think about hiring app developers for your Windows project. Do you have a service provider in mind? If not, you may consider working with Moon Technolabs.

Is it compulsory to install Windows 11?
For commoners, at least, installing Windows 11 isn’t mandatory. For app developers, however, the story is entirely different. As the latest iteration of Windows comes with several security-related enhancements, everyone should consider installing it.
How much does it cost?
As long as you have an eligible system, you can upgrade to Windows 11 without spending a dime on it. Also, new computers manufactured after 5th October 2021 come with this version of the OS. However, if you want to know the cost, you have to wait for the retail license.
Where can you find app developers for Windows platforms?
App developers for Windows-powered devices are available at Moon Technolabs, a recognized and experienced app and software development agency operating in several countries.

« What Are Your Options If You Can’t Use Flutter?