6 Reasons Why Your Enterprise should Go for Swift App Development 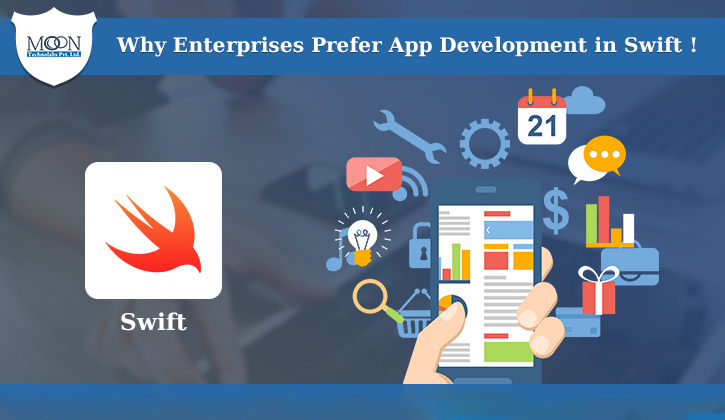 The last couple of years is witnessing the emergence of Swift, an iOS App programming language, as the most sought after for iOS App development. So much so, that developers and businesses are embracing it with open hands. But, what is Swift? Why do Enterprises prefer their iOS App development in Swift? Let’s know more.

Coming from the staples of Apple, Swift is a new language for MacOS, iOS, tvOS and Watch OS. It has been built as the next on the lines of C and Objective-C but without the limitations of compatibility. Swift is also a good replacement for C when it comes to embedded programming in the platforms of Apple.

Enterprise App development has been garnering a lot of attention these days due to the booming number of smartphone usage. This brings the most important question – which programming language is more suited to meet the international requirements for parameters of ease, quality, speed, cost, and image. Well, the popular answer for this is Swift App development, the most preferred by iOS App developers.

Why Swift over Objective-C?

The syntax and keywords of Swift are easy to learn and use and are almost similar to the English language. This means a substantial number of people will embrace app development and usage in Swift.

Swift offers in-line code fixing, which means less amount of time in fixing bugs, which is a huge plus for Enterprises. True to its name, coding in Swift takes fewer lines of code in a lesser timeframe, which again mean fewer bugs and lower cost.

Apple offering Swift as an Open Source Tech is opening a world of opportunities. With Swift already supporting all the Apple platforms and Linux, the developer community is working on to include Android too.

Enterprise Apps usually take a long time to load. This is avoided with Swift App development, as App Development in Swift uses Dynamic Libraries that are loaded directly to the memory. This leads to reduced size of the App, leading to faster App loading and increased App performance.

Another interesting feature is the Swift playgrounds. This feature helps iOS App developers to test their codes or algorithm instantly, without having to compile big chunks of it or after creating the entire App. Playgrounds help to quickly test and modify as development happens and progresses.

From the above, it is apparent that Swift has a plethora of advantages to offer compared to other programming languages for Enterprise App development. App development in Swift is faster, cheaper, easier, secure, better performance, and bug-free.

Swift offers the enormous benefit of being able to run on all iOS platforms. Swift also has its presence strongly felt in Embedded programming for wearables App development.

Being open source and backed by an active community of an increasing number of developers, it is pretty clear that Swift is here to stay. All these make Swift App development the ideal and most preferred choice for Enterprise App development.

If you want to opt for Swift App Development, get in touch with our team at Moon Technolabs Pvt. Ltd., one of the leading App Development Company in India. Give us a call at +1(951)801 5251 or a drop a mail at sales@moontechnolabs.com, today!

Why Mobile Learning Apps Are the Future of Education »