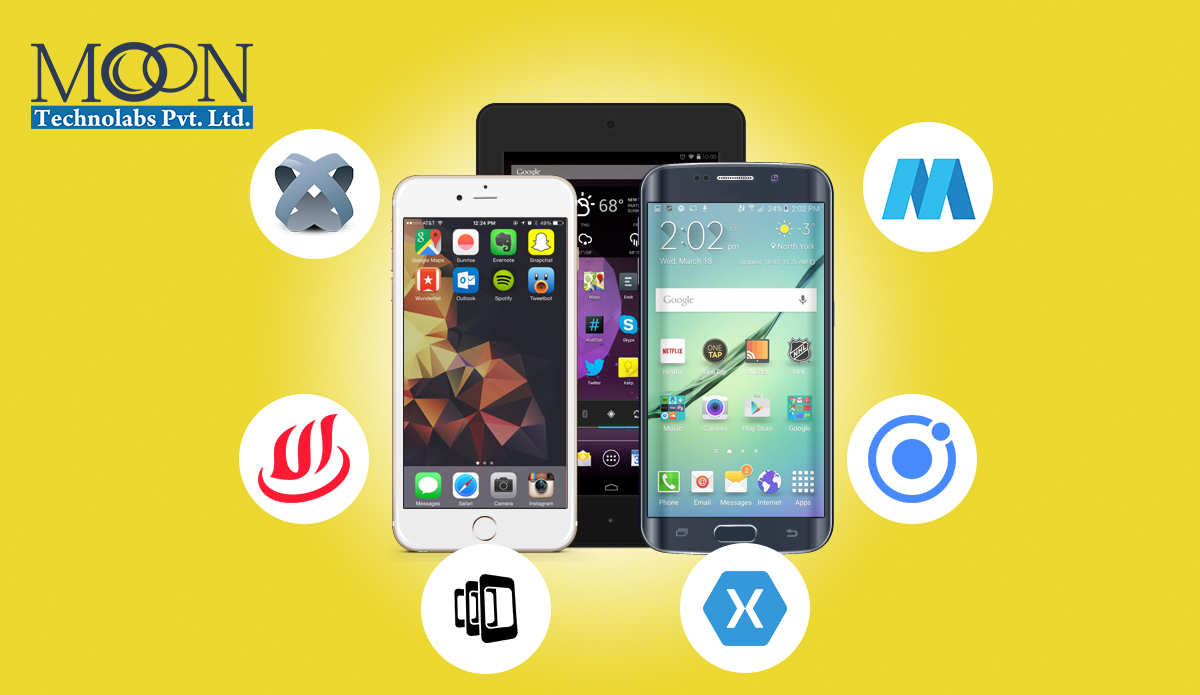 The digital technologies are gaining momentum at an unprecedented rate. Taking hybrid app development into consideration which is a front-runner and favourite among the developers. The reason behind is basically, hybrid mobile app development allows to write code once and use it to run on various platforms at no additional cost. The application can seamlessly operate on Android and iOS and can also be constructively reused for web and even with desktop applications by doing some minor changes and adaptations of the code for the desktop environment.

Without waiting further, let’s take a look at 6 of the best frameworks to build great & amazing mobile hybrid applications.

Xamarin, a software company which was founded in May 2011 in San Francisco, California is owned by Microsoft. Xamarin ventured into cross-platform implementations of the Common Language Infrastructure (CLI) and Common Language Specifications which is often referred to as ‘Microsoft.NET’.

C# as it’s shared a codebase, Xamarin tools are significantly used to write code for native Android, iOS and Windows app. These are written with native user-interface and shared codebase across multiple platforms, including Windows and MacOS. Xamarin is time efficient as it re-uses code, tools and minimizes team effort in the process and hence, Xamarin has made it to one of our top hybrid mobile app development framework.

The team working behind the scene for PhoneGap is Apache Cordova. PhoneGap is also one of the cutting-edge cross-platform frameworks for mobile hybrid application development. PhoneGap framework hybrid applications are built with HTML, CSS, and JavaScript for multiple platforms using the current web development skills with a single codebase which allows you to reach wider audience irrespective of their device operating system.

For Apache Cordova applications, rendering and JavaScript is implemented via CSS3 and HTML5 respectively. Certain native plug-ins can be extended to induce more functionalities from JavaScript, making it feasibly communicate directly between the native layer and HTML5 page. These plugins allow accessing device’s feature such as a camera, microphone, file system, etc.

Ionic is completely free and open source SDK. Power-packed with more than 100 native device features such as Bluetooth, HealthKit, Finger Print Auth and combined with PhoneGap plugins and TypeScript extensions.

Built on Angular.js & Apache Cordova, it gives access to tools and services to develop using web technologies like CSS & HTML5. Developers use CLI to create, build, test and deploy Ionic apps onto any platform. Moreover, the Ionic framework has numerous app icons which can be further used. It also presents more enhanced features like deep linking, AoT Compiling, and Ionic Native.

Titanium is a mixed combination of two development environments viz., Xamarin & PhoneGap. Though most of the apps are written in JavaScript, developers may have to use a custom XML and Appcelerator’s API in supporting and enhancing certain features.

An MVC framework, which propels the development time put into mobile apps by using Alloy to reuse across different apps and hence, eliminating the need for re-creating the lines of code. To begin with, you’ll need to download Titanium Studio. The Titanium SDK already comes with platform-independent APIs which can access the phone hardware.

This framework comes with fastclick.js and overthrow.js for seamless and amazing mobile experience. Responsive media queries are kept as separate files out of the bootstrap and can be used as per the need. Mobile Angular UI comes equipped with overlays, switches, sidebars, scrollable areas and navbars which are positioned in a way to not roll off while on the scroll. This framework is an open source and hence free to use under the MIT license.

One of the newest framework for hybrid mobile development as compared to its counterpart, Onsen UI giving run for the money in terms of functionality to Ionic. Onsen UI is an open source framework which can be permitted to use under the license of ‘Apache’.

Not only you get to pick and jump between frameworks such as Angular, Angular2, React, Vue.js, Meteor or JavaScript to build your hybrid apps but also offers enormous feature components and responsive out of the box. It allows you to structure code in HTML5 & JavaScript and push through PhoneGap and Cordova to build hybrid apps. The wide application of this framework is used for commercial projects as it very easy to use, efficient, flexible and induced with markup components.

The Underdog Of Tech Revolution: Internet Of Things »

« Android Mobile Apps: The Best Foot Forward For This Generation